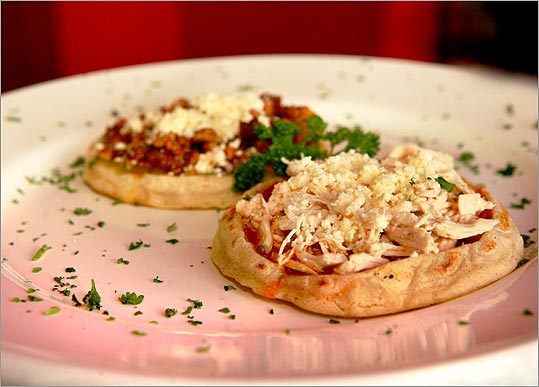 Gorditas topped with chorizo or chicken and queso fresca are one of the Mexican specialties served at Angela's Cafe in East Boston. (Globe Staff / Wendy Maeda)
By Devra First Globe Staff / February 27, 2008

There are many things we do well in New England. Clams fried and chowdered, lobsters rolled and boiled, Fenway franks, roast beef sandwiches, the foods of Portugal, Vietnam, Brazil.

There are some things we could do better. Pizza and bagels, anyone who grew up in New York will tell you. Mexican, anyone from California will say - sadly, perhaps a bit petulantly, with bottom lip out.

Poor Californians. Your taco trucks, birria stands, paleterias, and eternally ripe tomatoes are so far away. But there is good Mexican food on this coast. It's just a little harder to find.

Take Angela's Cafe. If you don't know your way around East Boston, it's quite a bit harder to find. But once you home in, you won't forget how to get there. Angela's is memorable.

As with most memorable restaurants, that has a lot to do with the people who work there. It's a family business. Luis Garcia, son of the chef, makes the rounds in the tiny, goldenrod-colored room. He is chatty and welcoming, full of information about the restaurant's food, the status of its wine and beer license (hopefully in a few months, he says), and its history. Before his family opened the restaurant five months ago, Angela's Cafe was a pizzeria. He'll remember you on your second visit.

Then there's the chef herself, Angela Atenco Lopez. Having cooked professionally in Puebla, a center of Mexican gastronomy and her home till five years ago, she now prepares the dishes of that region here (plus the likes of pancakes, steak bomb subs, and ziti). From her tinga to her pipian to her astounding mole, this is Mexican soul food. It grows on you exponentially with each visit, and soon you find yourself craving it the way you might crave something your own mother cooks.

And, like your own mother might, each night Atenco Lopez cooks what she's in the mood to cook, depending on what's in the larder. There's a printed menu of tacos, quesadillas, and tostadas, all always available. Then there's a chalkboard with a rotating roster of specials. And then there are the other specials, not written down, which Garcia tells you about at your table.

But Angela's had me at guacamole. Just avocados, lime, salt, cilantro, and bit of white onion, it has a silky, chunky texture nothing like the overworked, gluey guacamole one's often served. The texture is produced by the molcajete, or mortar, the guacamole is made and served in. The stone device is shaped like a pig, and it's hard not to make one of yourself when faced with bright green avocado, homemade tortilla chips, and the addictive red and green sauces that come on the table, just hot enough.

A bit of restraint is in order, though, because there's sopa azteca, a restorative bowl of broth, avocado, and tortilla strips, sprinkled with queso fresco. There's pozole, a soup studded with hominy, pork, and radishes. There are rajas con crema, strips of poblano peppers cooked in cream until they are limp, heat tempered by richness. And there are endless tasty versions on the theme of something-on-a-tortilla.

Tacos arabes evolved from sandwiches brought to Mexico by Middle Eastern immigrants - the tortilla here is a more pita-like flour version than the usual corn round, and the meat is warmed by a chipotle marinade. And, yes, these "Arab" tacos are now made with pork.

Enchiladas are excellent in a green sauce of tomatillos, cilantro, and jalapenos. You can also get them topped with mole poblano, and mole, let's face it, is what you've been working toward all meal: the pinnacle of Angela's kitchen.

Garcia says there are 50 to 60 ingredients in this sauce, the glistening dark brown of molasses. Among them are about 10 varieties of chili, but their heat adds up to a bear hug, not a sucker punch. You can't consciously taste each spice, the tortillas, the plantains, but subconsciously you sense all of the components playing on your tongue in spicy-bitter-sweet-nutty-chocolatey complexity. It takes his mother two days to make the mole, Garcia says.

Angela's Cafe isn't perfect. The mole is also served on chicken breast with rice and beans, but the chicken occasionally comes out dry. One night the pipian tastes off, as if the sesame seeds are on the brink of their expiration date. (Though on another visit it tastes perfectly fresh, a lighter take on the complexity of a mole.) Meatballs in chipotle sauce have surprise chunks of hard-boiled eggs inside, and the meat is like the moistest meatloaf mix ever. But the gravy they're in is too greasy and salty to enjoy in volume. And on a windy winter night, the family's hospitality will have to be warmth enough - the windows don't do much to keep the chill out.

But especially given the tiny staff - Garcia's sister and one other employee help Atenco Lopez prep and cook, a niece helps wait tables on weekends, and Angela's "day off" is Sunday after 3 p.m. when they close - the quality of what the kitchen turns out is impressive.

I - and thus possibly you - have the website Chowhound to thank for alerting me to this restaurant. Here's to those who discovered Angela's Cafe and wrote ecstatically of it online. Their fervency made lovers of Mexican food sit up and take notice. And here's to a plurality of opinion about food in this city. It makes it a richer, more interesting place to eat.