A top chef from Paris finds Boston to his taste 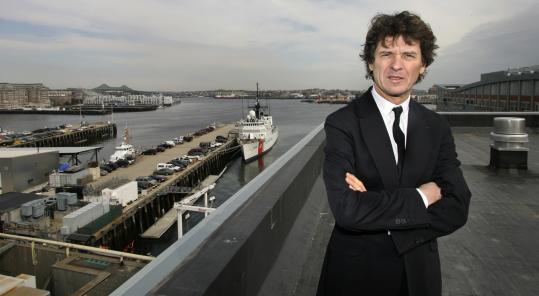 Guy Martin at the Battery Wharf site where he will open his second Sensing restaurant. He opened the first in Paris. (Pat Greenhouse/Globe Staff)
Email|Print| Text size – + By Beatrice Peltre Globe Correspondent / February 27, 2008

As chef of Le Grand Véfour, a historic restaurant on Palais Royal in central Paris that dates to 1746, Frenchman Guy Martin is one of only nine three-star Michelin chefs in the city. Now he's bringing his renowned culinary artistry to Boston with the restaurant Sensing. It will be part of the Regent Boston Hotel at Battery Wharf in the North End.

Martin has won almost every culinary honor that France awards and received the distinguished French Legion d'Honneur. In 2006, he opened the first Sensing restaurant near the Jardin du Luxembourg - in a less upscale setting than Grand Véfour. Sensing in Boston will be something like its Paris model, says the chef. The 80-seat contemporary spot - his first restaurant in the United States - is expected to open this spring with a 40-seat terrace overlooking the ocean.

The chef, 50, lives in Paris. He was in Boston last week to check in on his new establishment. He isn't comfortable speaking English, so we talked in French.

Q. Why did you choose Boston to open your new restaurant?

A. This project really started as "une histoire d'hommes" - a story between men. When Francois Nivaud [former managing director of Boston Harbor Hotel and now a consultant for Battery Wharf] asked me to join the project, I didn't hesitate. He and I have been friends for years, and I really trust his sense of rigor and professionalism. I also think that Boston is a cosmopolitan city open to Europe, with people enjoying a contemporary, progressive cuisine.

Q. When you think about Sensing, what do you picture?

A. Sensing will be a destination for those attracted by a beautiful, fine, and subtle cuisine. I want colorful and vibrant décor with a modern and contemporary look. I really imagined the place like a painting, with careful attention to decoration. There will be photos on the walls that refer to the senses. They're extracts of a film projected on a wall in the Sensing in Paris.

Q.Will Sensing here resemble the one in Paris?

A. Similar but with different food inspirations. But you see, coming to dine at Sensing is about the food and the place. I truly want to give my customers a unique experience, visually as well as emotionally.

Q. What does the restaurant name mean?

A. Sensing is the combination of two concepts: the five senses awakened and swing, which refers to movement. It is about a cuisine that changes and keeps renewing itself to awaken the five senses.

Q.You talk about a concept of "cuisine without borders." Explain what you mean.

A. It simply means that it can have many sources of inspiration: from the West to the East - dishes with Japanese touches, spices originally from Maghreb or India. My cuisine will incorporate local produce into these interpretations of my dishes, a cuisine as an invitation to travel.

A. Modern and healthful, good for the heart and good for the mind, offering a lot of vegetables. It will be a short, colorful menu, too, with dishes that are light, fresh, simple yet technical at the same time. I want my customers to taste the ingredients. To give you an example, there will be dishes like oysters in a jelly made with seawater, or a horseradish blanc mange. The menu will also follow the rhythm of the seasons and change a minimum of four times a year, more according to the produce available on the market. I always focus on using the top quality, with the best organically and locally grown ingredients, and I work with a dietitian who validates all my recipes. You know, it is just as if you are looking for the best for yourself. My cuisine is a cuisine of emotions, and it is about love, respect, and giving. I want to give the best to my customers.

Q. Where does your staff come from?

A. The executive chef will be Gérard Barbin from Le Grand Véfour. He has also worked with French pastry chef Pierre Hermé and famous caterers before.

Q.So your menu is ready?

A. Oh yes, and the whole team too. In fact, one of the reasons for my trip to Boston this time was to make sure that our menu fit the environment and the season. My team of chefs will arrive in a month.

Q. Since you don't speak English, how will you oversee the staff? Will the whole staff come from France?

A. The main chefs will, but we are also going to hire local staff. In fact, I have already received many e-mails inquiring about working with us, which is great. I am hoping for a great collaboration between the different teams of our two countries. Barbin, who speaks English, is the one managing the staff on site.

Q. Where do you find your inspiration for your cuisine?

A. A lot comes from painting and my curiosity about food. My cooking philosophy is about being open to others, about giving and loving. There is no taboo in cooking. The only barrier that can happen is that it is not good.