A chef says olť to foods of Chiapas 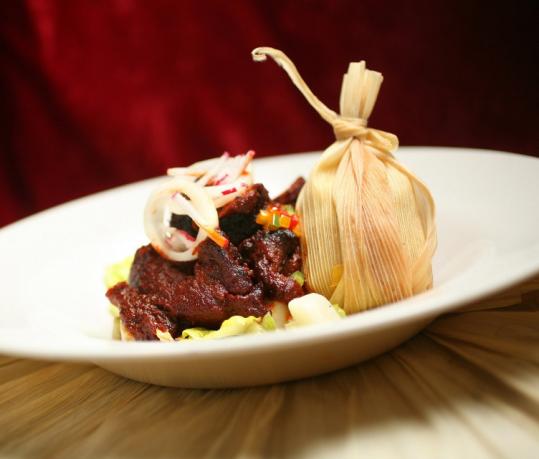 CAMBRIDGE - Erwin Ramos is smitten by the foods of Chiapas, the southernmost region of Mexico, which he visited last year as part of a group hosted by Chicago restaurateur, TV personality, and cookbook author Rick Bayless.

Ever since, Ramos, chef of Olé Mexican restaurant, has been serving what he learned. "To understand a recipe, I need to know where it came from," says Ramos, whose explorations in Chiapas encouraged him to learn more. Soon he'll be heading to Guadalajara and later in the spring to San Miguel de Allende with a group led by Diana Kennedy, another Mexican cookbook author. "I am not Mexican, so I must keep educating myself," says Ramos, who was born in the Philippines.

"As I smell and taste these different cuisines in their regions of origin," he says, "I am confident that I am really grasping them." For now, Chiapan cuisine is still a particular favorite. It was a hit when he cooked at the James Beard House in New York earlier this winter, and it remains popular at Olé, where along with his restaurant's mainstays - taquitos, quesadillas, and the popular tableside guacamole - diners have been enjoying Chiapan specialties such as rustic bread soup with plantains, tamales, chayote, and chili-seasoned pork pot roast with green poblano rice.

Ramos was tickled to discover similarities between Chiapan cuisine and the foods of his homeland, especially in the city of San Cristobal. "The Philippines were under Spanish rule for 400 years," he explains, "so it makes sense there would be a link."

More humble peasant food than white-tablecloth cuisine, Chiapan cooking is highly reflective of the state's indigenous Mayan roots (about one quarter of Chiapans are of full Mayan descent), but the food lacks the sophistication of its more famous neighbor to the west, Oaxaca.

Still, Chiapas has landed on the culinary map - thanks in part to Bayless. The area's diverse topography includes mountains, plains, and seacoast, which are conducive to farming, cattle-ranching, and fishing. Chili pepper is used less often than in other parts of Mexico; common ingredients are tomatoes, plantains, black beans, raisins, cinnamon, and cloves.

Ramos looks forward to the day when he can master tamales like those he tasted in Chiapas. The secret, Bayless told him, has everything to do with grinding the corn by hand. In a typical village, one grinder is shared by all cooks. For months now, Ramos and his partner, Ivan Torres, have been trying to find a local source for hand-ground corn. "Rick [Bayless] tells me to keep looking," says Ramos. "He is so honest and so relentless in his pursuit of authentic ingredients and methods."

The Olé chef likes to make food look good. Mexican-Americans who dine there sometimes comment that Ramos's cooking tastes like their homeland, but doesn't look like the food they know. He takes that as a compliment. "Mexican dishes can sometimes seem too raw and rustic," he says. "Chefs there are starting to make more refined cuisine."

One recipe Ramos is eager to make is chili rellenos, a dish that incorporates peas, almonds, peaches, dried candied pineapple, and raisins. "When I got my hands on this recipe during that trip," recalls the chef, "I thought to myself: 'I don't care if I lose my baggage, but I cannot lose this recipe.' "