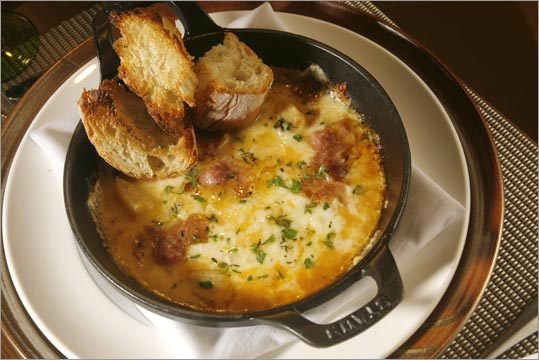 Push the chairs and tables up against the walls and L'Andana could double as a Tuscan-themed roller rink. It's one big restaurant - 240 seats, with room for 30 more in the bar area, plus a function room. And on a Friday night before a snowstorm rolls in, the place is doing such a brisk business we can't find a parking space and have to use the valet service.

It's free, but there's still something strange about handing over your keys to a valet in the lot of a Burlington restaurant. If there's one positive constant in suburban dining, it's that you can always find a spot for your car.

Hopefully, L'Andana signals the approach of another positive constant in suburban dining: good food. L'Andana's is excellent, worth driving to Burlington for, which doesn't really come as a surprise - it's run by the Columbus Restaurant Group, the not-exactly-slouches behind Boston's Mistral, Sorellina, Mooo...., and Teatro. (Formerly known as the Commonwealth Restaurant Group, it was recently renamed because of copyright issues.)

Chef-owner Jamie Mammano and crew have a lot of practice with Italian, and that's what they stick with here, under the sure hand of executive chef David Blessing. The choice of a crowd-pleasing cuisine does just a bit to hedge the bet of opening an expensive, 200-plus seat restaurant in Burlington.

Hedging the bet further, the literal centerpiece of the menu is a selection of crowd-pleasing wood-grilled meats, listed in a box at the middle of the page. These 20-ounce rib-eyes and 16-ounce veal chops are big enough to hide the presence of slightly edgier dishes - venison carpaccio, octopus, bruschetta with sweetbreads - from those who are squeamish about such things. Chicken al mattone (under a brick) is a juicy marvel with crackly skin, but swordfish comes out of the heat dry. Not wood-grilled but still good is veal Milanese, a giant serving draped over an entire plate and topped with a lemony arugula salad, a perfect foil for the crisp bread crumbs and tender meat.

But it's the pasta that's the actual centerpiece of the menu, even if it doesn't appear till after the primi, meats, and contorni. (This is confusing for those accustomed to ordering pastas as primi; the noodles are available in small and large portions so you can eat them for either course.) There are only a few choices, but the likes of fettuccine with mushrooms and tortellini stuffed with crab are the best part of a meal at L'Andana (the name is a twist of the Italian word "lontano," meaning "far away").

The tortellini are what I would return for, silken pasta wrapped around fresh, sweet crabmeat, tarragon-infused broth pooling around the little dumplings. Crab is so often a pale shadow of the stuff you can get on summer road trips to Maine, but this tastes like what you'd buy from a picker selling it out of a cooler on her front lawn in Stonington.

That fettuccine, too, captures the essence of a place - a bosky wood. Meaty mushrooms are grilled to give them even deeper flavor, and the dish is finished with black truffle butter. The noodles are perfectly al dente. Capellini interwoven with shrimp, clams, salt cod, and tomatoes is a dish lively with different sea tastes, made livelier with a zip from Serrano chilies.

Not all of the noodles are music to the mouth. Spaghetti chitarra ("guitar" - a reference to the stringed device this type of noodle is cut on) is given the carbonara treatment, but it's bland and lacks the rich egginess. The person who ordered it declares it a waste of calories. A better indulgence is a primi of fonduta. This plate of gooey cheese embedded with slices of sopressata and cloves of roasted garlic is great 38th date food - eating it is kind of romantic, in a "Lady and the Tramp" we're-slurping-the-same-strand way, but not if you're trying to impress someone.

L'Andana itself can be romantic, when you're nestled in the back with a view of the gas fireplace, splitting a dish of house-made sorbetti or some plump little apple cider doughnuts. (It helps if you're tended by the waitress who exudes such competence she could be Martha Stewart's sister, rather than the waiter so impossibly, bumblingly off he needs three helpers to get your dinner to the table.) The chairs are comfy, if upholstered in an oddly giraffe-like pattern; the lighting is dim; and the room is amazingly not that loud, given its vast dimensions. But it's also a great place to go with a group - much of the space is set up with bigger tables, where women with hair lacquered into impeccable, unmoving coifs and gentlemen in suits sit sipping cocktails and glasses of falanghina and dolcetto. The decor is mod meets someone's idea of a Tuscan farmhouse - wood floors, chandeliers made from wine barrels, oh-so-rustic bales of hay ensconced on shelves near the ceiling; track lighting, cream-colored banquettes, and a white cast-resin deer head on the wall.

If it's hunting season in the suburbs, L'Andana hits its mark right between the eyes. Its immediate popularity confirms there's a hunger for high-quality food beyond the city limits. Suburban restaurants such as Coriander and Il Capriccio have been proving this for years. But in a heavily populated Boston restaurant market, chefs and owners are increasingly looking farther afield. Clark Frasier and Mark Gaier of Arrows fame chose to open their new spot, Summer Winter, in Burlington. The Met Club and Sel de la Terre have new branches in Natick. In a few years, we may all be heading to Toro Foxboro and Petit Robert Revere for a night out.