THIS STORY HAS BEEN FORMATTED FOR EASY PRINTING
HARVEST | dining out 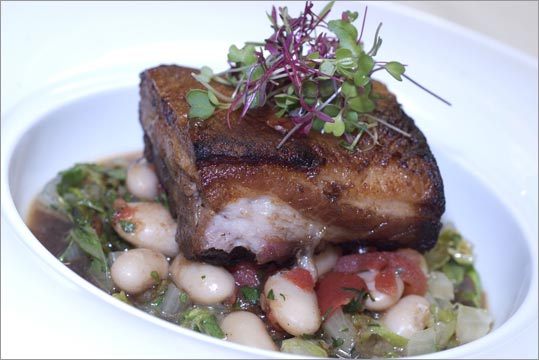 Harvest has tenure. The Harvard Square restaurant, feeding and watering hole to the Cambridge intelligentsia since 1975, is assured of its position. But that doesn't mean it's coasting. Though the decor is a bit tired (renovations will begin at the end of January, and the restaurant will be closed the last two weeks of February), the food just got a major spruce-up: new chef Mary Dumont, who took over in September. The New Hampshire native cooked at Jardiniere and Campton Place in San Francisco, among others, before returning to New England as the chef at Dunaway Restaurant at Strawbery Banke in Portsmouth. N.H.; she was named a best new chef of 2006 by Food & Wine magazine.

She's the right person to head up Harvest: Her cooking is rooted in the canon, but with a light, modern touch. Not stodgy, not cutting edge, it will impress the traditionalists without boring more restless palates. On the current menu, diners find classics such as billi bi soup - little more than mussels, cream, and booze, a throwback both elegant and decadent - duck breast, and rack of lamb. But there's Pernod in the billi bi instead of the usual white wine, lemongrass-prosciutto consomme pooling under the duck, and preserved lemon gnocchi with the lamb. If Harvest has a West Coast analog, it's the Cafe at Chez Panisse; both opened in the same era, and both succeed by doing exactly what so many restaurants talk about - building dishes around fresh, high-quality local ingredients.

But there's no mistaking the scene at Harvest for Berkeley. "This is so 02138," one diner whispers, looking around the room. There are men in tweed and corduroy jackets with elbow patches, women wearing organic fibers and silver earrings that look artisan-made, a group of what appear to be faculty members entertaining a visiting academic. (OK, it does sound like Berkeley.) On a later visit, 75 percent of the clientele is wearing blue button-downs (as are the staff - even the waitresses wear ties). A table of young gents pluck shrimp and oysters off a fruits de mer platter, loudly trying to out-clever one another. "Tom's in his corporate apartment," we overhear one diner say to another. "She just booked her trip, first class," someone at another table says. Some nights you get liberal arts, others you get business school.

Either way, the fruits de mer is a fine place to start, a generous serving of oysters (often local), shrimp (cooked just a hair past perfect), half a lobster tail, and a dollop of ceviche. The platter of shellfish and ice on its tall metal stand makes departing customers say "ooh!" and nudge their partners - next time. Its landlubber equivalent, the charcuterie platter, is even better. There's a ramekin of silky duck liver mousse, a rough-hewn housemade country terrine, caper berries, paper-thin slices of pickled fennel, and a smear of dark, fruity-tasting violet mustard.

Harvest's menu is vegetable-friendly, and that's what elevates it. It's no mean feat to prepare meat and fish well, but any number of restaurants do so and then stiff the rest of the plate. Everyone loves potatoes mashed and fried, but they've been typecast. At Harvest, they wind up as confit, in mousseline, braised in red wine, and cooked risotto-style. The vegetables aren't sides, supporting players for the protein; they're integral parts of the dish. Grilled duck breast is served in lovely thick, rosy slices, but what makes it so good are the slivers of buttery Verrill Farm pears hiding underneath, a counterpoint in taste and texture. Braised kurobuta pork belly is a quivering cube of fatty, crisp-edged melt-in-your-mouth meat, and if it was served alone on a white plate, it would still command attention. Here it's part of a "BLT" with beans (cannelini), lettuce (braised), and tomato (confit). The dish reminds us that lettuce is a green, not just something that goes in salads; it keeps the jumbo beans and pork from becoming too heavy.

So even if, say, a piece of halibut is ever so slightly on the dry side, the dish is still memorable because the "hand dug potato confit" (who knew that grew in the ground?) and the chive and potato mousseline present two sides of the tuber on one plate, and because the sauteed shrimp and Pernod in the dish taste so good together.

In a duo of Wolfe's Neck Farm beef, no such distraction is necessary. A hunk of grilled ribeye sits beside a hunk of braised short rib. "Age before beauty," the plate's owner says, and tucks into the short rib. It's garnet inside, with a deep, seasoned flavor; the meat practically dissolves at the touch of fork tines. That must be what happened to it, because it disappears almost immediately. The ribeye is juicy and thick and gone almost as quickly.

Sometimes the elevation of vegetables backfires - salads, for example, can be too lightly dressed. And there's the odd dish that could hold back a bit more; does monkfish really need to be accompanied by herbed stuffing, bacon, artichokes, beans, and cockles, all in a broth heavily dosed with smoked paprika (so much so that one night it's inedible - let's chalk it up to day-after-Thanksgiving exhaustion).

But most things work, down to a bourbon pecan tart with a crisp-chewy crust, complemented by dried cranberries, and a chocolate souffle that the server punctures for you, then fills with a little pitcher of espresso cream. (The caramel pots de creme, however, is just wrong - there is no wobble whatsoever to this puck of uninteresting custard.) And the place is busy most nights, despite the fact that the service is either friendly or efficient, but rarely both.

Dumont has composed a menu that reads like a laundry list of local producers and ingredients: In addition to the Wolfe's Neck beef and the local oysters, you find Applecrest apples, Casco Bay cod, Georges Bank monkfish, and at the bar Point Judith calamari, Berkshire ham, and Boyden Farm beef. It's a bit precious to mention them all, but it also stresses the chef's relationships with regional farmers and fishermen, many of these connections carried over from the Dunaway. It gives a sense of continuity. At a place like Harvest, still the quintessential Cambridge restaurant, that seems appropriate.