THIS STORY HAS BEEN FORMATTED FOR EASY PRINTING
Sauce 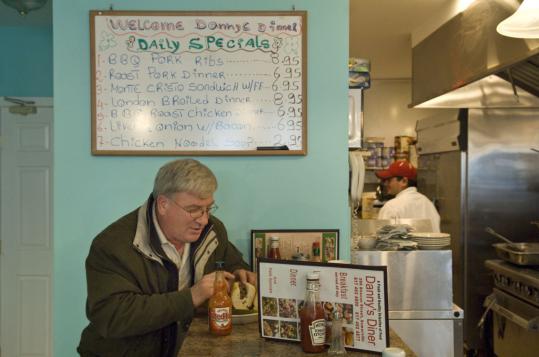 Those who have spent quality time at breakfast joints and diners (not to be confused with high-end restaurants taking a stab at brunch) will tell you that you should not judge morning-meal establishments by their décor or service.

Some of the best diners look rough around the edges and have servers who grunt, glare, and silently judge you if you make a high-maintenance request.

Knowing this, we were unfazed when the first 15 minutes of our visit to the new Somerville breakfast spot Danny's Diner included a grunt when we asked for decaf coffee (apparently, that was a no-go at Danny's), a glare when we tried to order lunch during breakfast hours, and a silent judgment when we dared to pull up a fifth chair to a table for four.

In the four months that Danny's has been open, the unassuming corner restaurant has slowly developed a following. It's no mob scene like nearby Ball Square brunch haven Sound Bites. But despite its minimalist decor and occasionally icy staff, Danny's is a contender to become a favorite morning eatery for those who want a no-frills wake-up. It's breakfast done right, and really, at these places, the food is all that matters.

On this recent Sunday morning, we were surrounded by people you might see at Sound Bites or Sorella's in Jamaica Plain - 20-somethings in pairs, a family, and some disheveled newspaper readers at the counter by the open kitchen. Danny's is small (there are only 30 seats, including stools) with just a large refrigerator with canned drinks by the front door and a few framed pieces of art on the pastel walls.

We quickly learned that while breakfast is served all day, Danny's only serves its lunch and dinner menu, which has everything from an Italian sub to scallops scampi, from 11:30 a.m. to close. Our request for a grilled cheese sandwich at 11 was rebuffed with the aforementioned glare despite the fact that there were no dining hours listed on the menu.

We also learned that while decaf coffee wasn't an option that morning (owner Danny Escobar said by phone that it should have been), egg whites were. I went with the egg-white version of the veggie omelet, which was an almost grease-free, fluffy mix of whites, peppers, onions, and tomatoes served with a heaping pile of shiny hash browns. It wasn't the favorite, though. First prize went to the less-healthy corned beef hash omelet, which was a plate-size block of yellow egg blended with delicious corned beef and potato.

We omelet eaters had a choice of an English muffin, toast, or pancakes as a side. The cakes turned out to be the best pick because, ladies and gentlemen, Danny's makes near-perfect pancakes. They weren't thick like the ones you might see at a more gourmet brunch spot trying to justify charging $10 for a simple stack. They were the light and fluffy pancakes you might make in your own home - the flawless, round Bisquick circles that only appear on your frying pan after you've made a dozen throwaways. The chocolate-chip pancakes were just as good, although almost too decadent and gooey.

The breakfast sandwich came out as expected, egg on an English muffin with the option of meat - nothing special, but nothing wrong either, especially for $3.25.

Diner snobs should know that Danny's doesn't have everything. The menu includes breakfast basics, but you won't find bagels, lox, blintzes, or other New York-style favorites.

And of course, like many tiny breakfast spots, Danny's doesn't want you to hang around. Once we had consumed our morning meal, it was time to go. Others were waiting and we were pretty sure our server was sick of us.

It was a brief experience, but the food stayed with us. In fact, one of my dining companions said that a few days later, her jacket still smelled of grease. At good breakfast joints and diners, that can happen, too.