THIS STORY HAS BEEN FORMATTED FOR EASY PRINTING
mooo.... | dining out

A slice of luxury 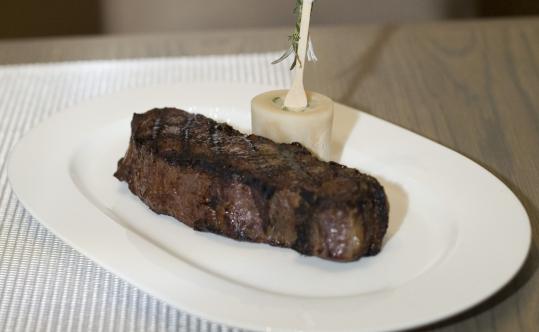 The dry-aged sirloin at Mooo.... has the flavor of two steaks concentrated into one; it's accompanied by a bone filled with roasted garlic and bone marrow butter. (ZARA TZANEV FOR THE BOSTON GLOBE)
Email|Print| Text size – + By Devra First Globe Staff / November 8, 2007

A picture of a very sweet calf is looking down at me from the wall as I chew my dry-aged sirloin. Its little eyes bore into my soul. Oh no - am I eating Mommy? If so, Mommy's yummy. Across the table, two of my fellow diners are reclining on pillows. "I think they're made of cow hide," one of them whispers. Not long ago, she was a vegetarian. Now she's eating a $130 steak. The calf picture might be enough to send her running back into tofu's arms, if only that Kobe beef weren't melting so magnificently in her mouth.

We are at Mooo...., Fifteen Beacon Hotel's steakhouse, where carnivorous bravado is wrapped in plush trappings - tones of off-white and beige, giant armchairs, gauzy lighting. The room and the attentive service say: You are a stylish and tasteful human being. The artwork says: You can eat the uddered equivalent of Bambi while looking her in the eye - you're the man! The bill says: Whoever you are, salud. You're doing all right.

Steakhouses are still our idea of luxury, where we're willing to shell out the big bucks in exchange for being - and feeling - well fed. And so they keep opening. When this is what you're after, much of the food at Mooo.... is worth it. The next step down from the paycheck-wounding 6-ounce Kobe is the dry-aged sirloin. At $62 for 14 ounces, it's a value meal in comparison. The beef comes from Four Story Hill Farm in Pennsylvania, which has supplied meat and poultry to Thomas Keller, Charlie Trotter, and other big-name chefs; it's aged for 21 days, and it tastes as though two steaks have been concentrated into one. Filet mignon ($36 for 8 ounces) is tender enough for a toddler, but fit for someone with a much more discerning palate - it's mild, but not bland. And for those with a taste for Kobe beef but no expense account to support it, a Kobe beef dumpling appetizer is hardly slumming it. Here the meat goes back to its Asian roots with flavorings of ginger, scallion, and soy sauce, enclosed in silky pasta. (Those without expense accounts might also want to watch out for the surreptitious pouring of multiple bottles of water.) Steaks here are served with a bone filled with roasted garlic and bone marrow butter; the garlic obscures the taste of the marrow, but the well-seasoned steaks don't need it anyway.

For a place named Mooo...., there are plenty of non-bovine options - perhaps that's what the puzzling tail of ellipses is meant to indicate. Grilled corvina, a fish common in South America, is firm and meaty, with a clean flavor. The crispy skin, left on, gives it an almost sardine-like taste that pleases the Americans at the table, if not the Peruvian. ("Corvina's not supposed to taste like anything," she says. "It tastes like what you cook it with.") Maine lobster macaroni would be good if the lobster weren't so dry. Sea scallops are sweet and wonderful on one occasion, served with mashed potatoes made equally sweet by the inclusion of crunchy corn kernels. On another visit, though, they're way too salty, and corn is no longer in season. Now they come with Brussels sprouts, bacon, and mushrooms. The bacon, sadly, is MIA from our order. The Brussels sprouts are present, though when we try to order them as a side, we're told the kitchen is out. Then can we have the scallops, but hold the scallops?

Deep-red tuna tartare is cool and seductive in the mouth and treated with Asian flavors similar to those on the Kobe dumplings, to the opposite effect - the ginger and soy are refreshing on the tuna, and comforting with the beef. (The sesame-encrusted crackers the fish is served with aren't particularly tasty, though.) The tartare is almost as good as the version at Sorellina, Mooo....'s sister restaurant along with fellow Commonwealth Restaurant Group establishments Mistral and Teatro. They're all overseen by chef-owner Jamie Mammano, who has tasteful luxury down to a science (and another new restaurant with L'Andana, an Italian spot in Burlington).

The foie gras terrine is more tasteful luxury, a slab of mousse-like richness. As rich as it is, it's hard to stop eating. Often, I can take or leave foie gras, but I'll take this stellar version (it helps that there is no picture on Mooo....'s wall of a sad-eyed fowl).

This being a steakhouse, sides are separate; with this category, the menu gets a bit cheeky. It offers succulent "Steamed Asparagus, hollandaise (of course)" and "Whipped Sweet Potato, mini marshmallows." Cheekiness continues with the roster of sauces, from béarnaise to barbecue, all $1 or $2 till list's end, where A-1 is free. Dare you to put it on your Kobe sirloin. For sides, the way to go is the side flight, which contains mashed potatoes, creamed spinach, truffled parmesan fries, and mixed mushrooms. It's a nice selection; one giant serving of cauliflower or potato gratin is too much of the same. But my favorite side may be the rolls that come at the start of the meal in a little skillet, shiny on top and dusted with coarse salt, doughy and buttery when pulled apart.

After all the foie gras and beef and marrow butter, you might think Mooo.... would merely go through the motions with dessert. Instead, it's thinking outside the box: The parfait of butterscotch pudding is a distant cousin to Jell-O's version. It is sweet, but it's also a touch salty, studded with crunchy bits of toffee and topped with fluffs of whipped cream. Sadly, you do not have multiple stomach compartments in which to fit seconds.

Before Mooo.... was reborn as a steakhouse, it was the Federalist, and there could hardly be two more different handles, one sober and statesmanlike, the other an inchoate bellow. Mooo.... is not about restraint. Things are big here: the steaks, the armchairs, the chandeliers encased in larger-than-life amber shades. Two "o"s aren't enough for its name; neither are three ellipses. Mooo.... is hungry for mooore, and it knows we are too.

Ratings reflect the restaurant critic's judgment of the food, service, and atmosphere in relation to the price, based on several anonymous visits.