The challenge: making a meal from the dusty shelves of a modest market. The result: radishes with butter and salt, flatbread, roast chicken, yogurt and cucumber sauce, and chocolate pudding 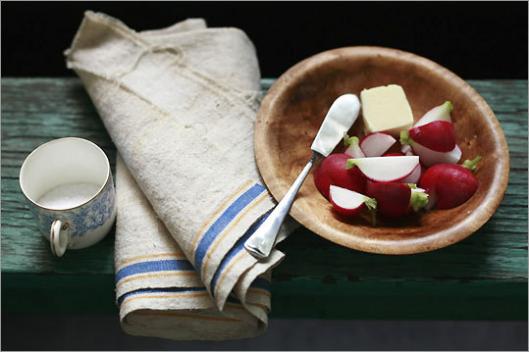 A special meal can be made from simple ingredients, like radishes with butter and salt. (Food styling / Jonathan Levitt; Photos by Zara Tzanev for The Boston Globe)
Email|Print| Text size – + By Jonathan Levitt Globe Correspondent / November 7, 2007

We can't always shop like the Parisian housewives of our domestic fantasies - sniffing peaches at the fruit stand, bossing around the butcher, and pinching all of the soft cheeses. Sometimes it is late, or we are hard up, or we are far from home, and under the harsh lights of a small, sad market we must make do.

This time of year especially, traveling for the holidays, we may find ourselves in an unfamiliar town, in a market more down-and-out and wilted than our favorite Shaw's or Whole Foods - not quite a convenience store (you won't need to Iron Chef a casserole out of Slim Jims and canned tuna), but the sort of place where it takes some hunting and gathering to put together dinner. But there is a way to buy when it seems as if there is nothing to buy, to plan a meal around cooking rather than shopping, to load the basket with the dowdy and unpromising, the generic milk and flabby chicken parts, and to conjure up something fit for the table.

What could we make, we wondered, with this and that, thrown together from the most modest of markets? Our meal: peppery raw radishes with sweet butter and coarse salt; a whole wheat flatbread, sort of a tortilla, sort of a chapati, rolled out thin and puffed in the pan; chicken legs and thighs, roasted on the bone until the skin burnishes crackly and golden and the meat pulls off in moist pieces; a simple yogurt and cucumber sauce somewhere between Indian raita and Greek tzatziki; and for dessert, the most old-fashioned chocolate pudding, cooked on the stove and crowned with a goofy dollop of fresh whipped cream.

It's a nice meal, but not the only menu to be made from those dusty shelves. We could have improvised spaghetti and meatballs, or fish tacos, or steak frites, but the idea was to make something that we would eat and then not just praise halfheartedly. We didn't want to say how good it was, but how much better it would have been with San Marzano tomatoes, or an avocado, or a nice thick rib eye - all of which we could have procured at any of the urban and suburban supermarkets in New England that have come so far since the no-arugula days of the '80s and early '90s.

But here we had radishes, which top the list of foods that are good no matter where, no matter when. Among the hardiest of vegetables, they sprout as soon as the frost is out of the ground and quickly swell bright red and crisp. In the produce section they hold up as well as Michelle Pfeiffer: They look fresh from the dirt while the broccoli yellows and the lettuce droops. In France, radishes, sliced in half or into quarters, dragged through soft butter, and sprinkled with coarse salt are a common aperitif-time snack. They are also a nice way to start a meal, or a good thing to pick at while you eat everything else - crunchy, spicy bites tamed by the sweet cream.

For the main course we chose to roast chicken. Perdue or Tyson birds may lack the deep flavor and pedigree of pasture-raised blue-footed poulets de Bresse or the New England equivalent, but with fatty skin and swollen flesh they're perfect for a hot oven. A whole chicken, trussed, larded, and stuffed with herbs, makes for a nice show on the table, but a pan of salted legs and thighs roasted dry until the skin renders golden brown and the juices run clear tastes just the same without any of the fuss.

To gather up the chicken we needed bread. Good bread can turn any meal into a feast. The packaged, sliced stuff, with its corn syrup and soft crust, is fine for grilled cheese but not quite dressed for dinner. You could make a crusty loaf from scratch, but you don't want to, and you don't have time anyway, so why not make flatbread? The simplest flatbread of all is just flour and water and a little bit of salt. Wheat flour gives it a toothsomeness and a wholesomeness, and if the dough is moist, the finished skins will be soft and pliable. In India and Mexico and other places, this sort of bread is a staple, eaten most days, at most meals, and never grown tired of. There is something to that.

For a saucy condiment we wanted something cool and kind of spicy. The combination of cucumber and yogurt is common around the world. Generally the yogurt is strained and then combined with garlic, cucumber, sometimes mint, sometimes chopped nuts, and usually some kind of oil. For our sauce, we combined yogurt right out of the tub with salted cucumber drained of its bitter juices and garlic crushed into a fine paste. We brightened everything with a squeeze of lemon juice and then let the flavors come together for a few minutes before we sat down to eat. Greek cooks make their tzatziki luxurious with a couple of glugs of fruity olive oil. We used chicken fat from the roasting pan.

And then the pudding. It came out richer and silkier and more cocoa-y than what we would have made from the Jell-O box. We stirred together cocoa powder, sugar, a pinch of salt, and plenty of milk and cooked it on the stove top with just enough cornstarch to bind everything together. Cooked and still warm, it was as viscous as creme Anglaise, but as it cooled, it thickened, and after a couple of hours was set but still jiggly - not quite as luscious as the custard of a crème brulee, but not bad for one pot and a few minutes of standing over the stove.

The meal came out looking like a peasant farmhouse lunch from somewhere in Turkey or rural India. We ate from mismatched plates and wooden bowls, starting out with knife and fork and finishing things off with our fingers and lips, sucking the bones clean and slurping the drips of sauce. We were full but ate the pudding anyway, leaning back in our chairs and feeling a long, long way from the bleak, understocked market.