THIS STORY HAS BEEN FORMATTED FOR EASY PRINTING
Eating locally

To get to the other side

How do you make chickens lay richer eggs and produce tastier meat? Let them graze in a pasture and eat organic grains, say Jen Hashley and Pete Lowy of Pete and Jen's Backyard Birds. 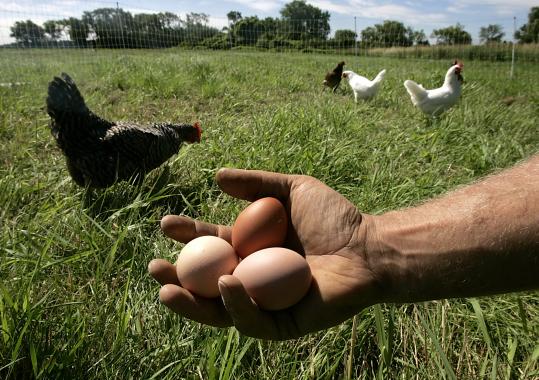 CONCORD -- Can there be such a thing as a happy chicken? On a cloudless, sweltering morning, a dozen or so White Leghorns, Araucanas , and Black Sex-links follow Pete Lowy and Jen Hashley around their fenced-in pasture on four acres here, rather than chill out in the funky painted mobile coop Lowy built for them. Curious and alert, the birds occasionally rub up against a leg or peck close at their feet.

"I was working inside here a couple weeks ago," says Lowy, who lifts up the coop's side wall to gather a couple of eggs from laying boxes. "They all followed me in here to watch."

The bigger question is, do happy chickens mean better-tasting omelets now and divine coq au vin later? Lowy and Hashley think so, as do the customers of Pete and Jen's Backyard Birds , a business the couple started at Verrill Farm here in 2002.

This is a homegrown enterprise. The Peace Corps alums met at a six-month-long ecological horticulture apprenticeship at the University of California at Santa Cruz. They discovered a mutual interest in homesteading as well as in each other. When they moved into their house on Verrill Farm, where Lowy is the assistant farm manager, the couple noticed a neglected weed- and bramble-covered coop at the bottom of their yard and asked the Verrills if they could clean it out and raise chickens.

Backyard Birds started with eight laying hens, only two of which were producing. The couple sold eggs to friends and co-workers. Experience bred confidence, and soon they were expanding their flock and looking for ways to raise birds humanely and with minimal environmental impact. Their research brought them to Joel Salatin of Polyface Farm in Virginia, who writes and speaks about pasture-based farming. By adapting some of his practices, Lowy and Hashley were able to move the birds out of the enclosed coop and into the pasture. "The Verrills have been very generous," says Lowy. "They let us use their land and build gardens, and expand and try new things."

Five years later, Backyard Birds has 70 layers and 500 meat birds. The couple sells eggs year round, and the meat birds are processed during four periods staggered from June to October.

"We really don't have to sell anyone on our birds," says Lowy. "Some times we'll get someone who wants one chicken and we'll think, 'OK, they're testing us.' " Adds Hashley, "They always come back raving about the taste and quality being better than some mystery-meat broiler. It sells itself."

Julie Dunn of Watertown is a typical customer. She and her husband buy eggs, along with four to six chickens each delivery period, which she says taste better than any chickens she could buy at the grocery store.

"It's certainly more expensive," says Dunn, an epidemiologist, who is paying $4.40 per pound for the birds, $5 for a dozen eggs. "So we eat less chicken." The fact that they're raised humanely and safely means a lot to her. "It's how I'd rather spend my food dollar."

Dunn is part of a growing number of consumers who care how their chicken tastes, and also how it was raised. A typical feedlot chicken is confined to a small cage with other birds, eating high-energy feed designed for faster growth. Battery chickens, as well, lay their eggs in crowded cages and are routinely debeaked to prevent feather-pecking each other to death. Proponents of factory farming believe this is the most efficient, least expensive way to get chicken and eggs to the American dinner table. Whole factory-farmed chickens can go for as little as 99 cents per pound; likewise, a dozen large eggs run about 99 cents.

Pete and Jen's Backyard Birds eat grass, bugs, and worms, clean themselves with dust baths, and roost in their coops at night. Their pasture-based diet is supplemented with organic grains, kelp, oyster shells, and grit, which help them grow naturally to four to six pounds. The chickens have acres of land to peck and, well, to spread their wings. If there's any bad news about this system, it's that it's a labor-intensive way to raise food.

"The reality is we can't [sell] for less money," says Lowy.

"So for some customers, chicken becomes a special thing," says Hashley. And once anyone has tasted the rich, flavorful, bright-orange yolk of a pastured chicken egg, it's difficult to go back to the supermarket variety.

Meat birds are separated from the layers, but both flocks are surrounded by solar-powered electric fences, which keep the birds safe from dogs, coyotes, and raccoons. Hashley is off the property all day as the project director at the New Entry Sustainable Farming Project through Tufts University, a program that assists immigrants and disadvantaged beginning farmers with training and access to land.

That leaves Lowy to check on the chickens. He moves the wheeled coops at least once a day to lessen the impact the chickens have on the pasture, and since the electric fences can easily be repositioned, the pasture never becomes denuded. He'll make a couple of daily trips to check on the birds' water, slipping ice cubes into it if it's particularly hot, as well as to collect eggs and clean nest boxes. An electric door on the layers' trailer lets the birds out in the morning. At night, the coop door closes automatically. Most of the time, all the chickens make it inside, but Lowy makes evening runs to catch stragglers.

This year, Hashley and Lowy added six Yorkshire/Hampshire hogs to their enterprise. Two hogs are spoken for: one for their Sept. 15 wedding on the farm and the other for an end-of-season party for the farm's Jamaican workers. The hogs are also surrounded by a solar-powered electric fence that can be moved around, and they learned to stay away from it, even if that means missing out on choice mulberries from an overhanging tree.

Walking back to the farm, Lowy and Hashley ponder the circumstances that brought them here. Neither hails from a farm family; Lowy is from suburban Long Island and Hashley was raised in a small town in Indiana. Their Peace Corps experiences -- his in Micronesia, hers in Honduras -- gave them both a close look at what he calls "the cycle of life."

"When I go home to visit my family," she says, "I can talk to older relatives about raising chickens. That's something they used to do, and when we explain why we're doing it, I think they think it's a little strange at first, but they get it."

Every few weeks this summer, we’ll check in with a farmer or producer or restaurateur who is contributing to the effort to help consumers eat locally. To view a photo gallery of Backyard Birds and read other Eating Locally stories, go to boston.com/food.