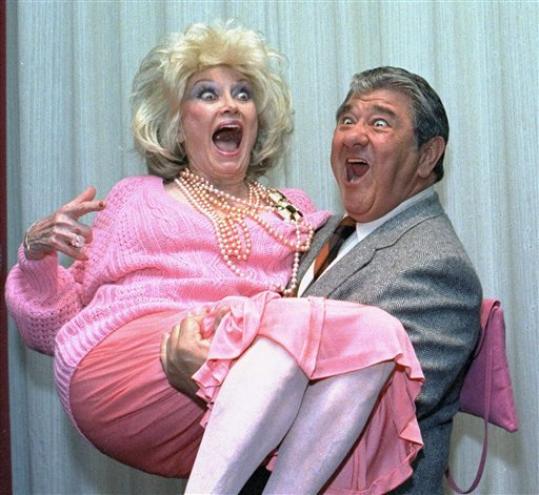 FILE-In this Oct. 9, 1985, file photo, Comedian Phyllis Diller gets a lift from emcee Buddy Hackett prior to the celebrity stag luncheon roast at the New York Friars Club in New York City. Diller, the housewife turned humorist who aimed some of her sharpest barbs at herself, died Monday, Aug. 20, 2012, at age 95 in Los Angeles. (AP Photo/Marty Lederhandler, File)
By The Associated Press August 20, 2012
Text size – +

A selection of comic lines from Phyllis Diller, who died Monday at age 95:

-- "I once wore a peekaboo blouse. People would peek and then they'd boo."

-- "You know you're old when your walker has an airbag."

-- "I was the world's ugliest baby. When I was born, the doctor slapped everybody."

-- "I became a stand-up comedienne because I had a sit-down husband."

-- "My vanity table is a Black & Decker workbench."

-- "The only thing domestic about me is I was born in this country."

-- "They say housework can't kill you, but why take the chance?"

-- "I have so many liver spots, I ought to come with a side of onions."

-- "The best contraceptive for old people is nudity."

-- And actor Dylan McDermott shares this line via Twitter: "One time (Diller) came over with a 70-year-old guy. Told me she was `robbing the cradle.'"