Obamas get out and about on the Vineyard 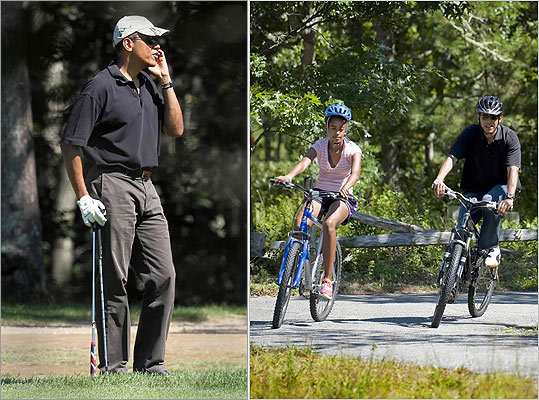 OAK BLUFFS - Even as an earthquake shook major cities in the Northeast yesterday, President Barack Obama finally looked like a man on vacation, going for a bike ride and to the beach with his family before hitting the links for a game of golf with friends.

Obama was on the course at Farm Neck Golf Club when the quake struck, and was photographed a few minutes later talking to advisers on his cellphone. The commander in chief didn’t feel the quake, but a pool reporter trailing the president’s party definitely did.

Obama, who has spent much of his Martha’s Vineyard vacation either indoors at the 28-acre Chilmark estate where the first family is staying or out of sight at restaurants or private residences, was very much out and about yesterday. As he did last year, the president joined first lady Michelle Obama and daughters Sasha and Malia for a bike ride in the 5,100-acre wilderness known as the Manuel F. Correllus State Forest. Obama was wearing a helmet - he learned his lesson two years ago when he didn’t wear one - sunglasses, a black polo shirt, and dark jeans.

“Hello, everybody,’’ the president said to reporters and about two dozen bikers who happened to also be out for a spin. The AP’s Mark Smith asked about the whereabouts of Libyan leader Moammar Khadafy, but Obama did not respond to the question.

Nancy Bressler, who was walking her dog elsewhere in the forest, told us she was excited at the prospect of seeing the president.

“I’m just going to keep walking, I guess. Maybe I’ll run into him. I used to see [Bill] Clinton all the time, but not Obama,’’ said Bressler, who is vacationing on the island from New York. “I’m glad my dog has taken care of his business. It would be bad if the president came by right at that moment.’’

Their ride over, the first family was retrieved by a phalanx of ominous-looking vehicles and whisked off to a private beach in Edgartown for a dip in the ocean. Though Hurricane Irene is about to bear down on the East Coast - sorry, ferries off the island before Sunday are booked solid - the skies were brilliant blue yesterday. Taking advantage of the glorious weather, Obama left the beach and made a beeline for Farm Neck, where he joined D.C. powerbroker Marvin Nicholson and frequent golfing buddy Eric Whitaker.