Behind the curtain, Obama going places around the Vineyard 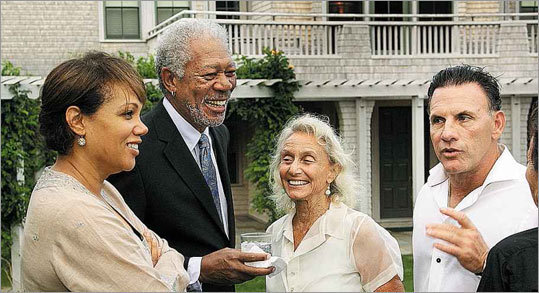 (Peter Simon for The Boston Globe) Last night, with the president out of sight, actor Morgan Freeman (second from left) was honored for his work with Plan!t Now, a disaster preparedness organization. A reception for Freeman was held at the West Chop home of lawyer James Ferraro (right). From left: Donna Lee, founder of Plan!t Now, Freeman, poet Rose Styron, and Ferraro.
By Mark Shanahan & Meredith Goldstein August 22, 2011

EDGARTOWN - On the third day of what’s shaping up to be a working vacation, President Obama remained mostly under wraps yesterday, spending the morning with his family at a private beach before hitting the links for a round of golf with friends.

Perhaps because it poses difficulties for the media horde trying to get pictures of him, Obama returned to Vineyard Golf Club in Edgartown, where he played Friday and had largely managed to avoid the cameras. And yesterday, he did skip some holes in an effort to bypass photographers.

With news breaking overseas and the economy in shambles, the president’s profile thus far has been diminished from his previous Martha’s Vineyard visits. Forget the public, even the pool reporters and photographers assigned to follow the president barely glimpsed him while he and first lady Michelle Obama were out to dinner Friday at the Beach Plum Inn or during the president’s visit to Charles J. Ogletree Jr.’s house Saturday. After golfing yesterday, Obama attended a private cocktail party at the home of CEO Brian Roberts and his wife, Aileen. Later, the Obamas went for dinner at Nancy’s Restaurant in Oak Bluffs with their daughters, Malia and Sasha.

While the president was sedentary for much of the weekend, the rest of the island was not. The Oak Bluffs fireworks were the place to be Friday night, and the best vantage on the Vineyard was the lush lawn at Peter Norton and Gwen Adams’s Queen Anne-style home overlooking Ocean Park. As always, Norton, the multimillionaire software publisher, and his wife, a financier, hosted a diverse crowd that included scions of Vineyard celebs, including Joel Buchwald, son of the late Art Buchwald, Kate Feiffer, daughter of Jules Feiffer, as well as Lotus founder Mitch Kapor, D.C. art maven Olga Hirshhorn, and New York choreographer David White, the artistic director of the Vineyard performing arts colony The Yard.

Also there was longtime islander Doug Liman, director of “The Bourne Identity’’ and executive producer of the USA series “Covert Affairs.’’ Liman had just flown in from New York and made a quick stop at the Martha’s Vineyard Agricultural Fair, where his goat, Ruby, won a blue ribbon earlier in the day.

“In what category?’’ asked Norton.

Others enjoying the catered spread of sausage, couscous, and potato salad were Liman’s mother, Ellen, FDR’s granddaughter Laura Roosevelt, photographer Peter Simon and his wife, jewelry designer Ronni Simon, Harvard professors Alan Dershowitz and Rosabeth Moss Kanter, and the Nortons’ house guests, Veronica Biggins, chief of White House personnel for former President Clinton (and now a fellow at Harvard), and her husband, Franklin, a judge in Atlanta. And who was that hunky fellow who walked in with New York philanthropist Mary Cronson? We’re told it was Ames Brown from “Bachelor Pad.’’

Meanwhile, Peter Farrelly and his wife, Melinda, had friends over to their place “up island.’’ (We think it’s Chilmark, but it was dark and our GPS doesn’t work so well here.) Making the scene on the second floor of a barn with a pool table were nightlife nabob Patrick Lyons and his wife, Kristina, “SNL’’ anchorman Seth Meyers and girlfriend Alexi Ashe, Sox vice chairman David Ginsberg and his fiancee, Laura Margosian, and “Curb Your Enthusiasm’’ crank Larry David, who just wrapped work on the Farrellys’ film, “The Three Stooges.’’ (Turns out David isn’t much better at pool than golf, about which he wrote recently in The New Yorker.)

That event, attended by director Spike Lee and Motown legend Berry Gordy Jr. (in addition to Obama’s usual island buddies), was hastily arranged Saturday morning by Boston-based planner Barbara Edelin. Guests, we’re told, received a cryptic e-mail from the White House at 2 p.m. Friday and were required to RSVP no later than 5 p.m. with their Social Security numbers. They were not told what or where the event was, but if they missed the deadline, they could not attend.

“You snooze, you lose,’’ said Cousen Rose Gallery owner Zita Cousens, who did not snooze and was at Ogletree’s house when the president arrived.

Obama stayed for about an hour, and didn’t make a speech, opting instead to greet the 100 or so guests individually.

Cousens was supposed to be at her gallery hosting the opening party for artist Glenn Tunstull’s new show, but she was delayed in getting there.

“I told Glenn ‘I’m going to be late, but I can’t tell you why,’ ’’ she said. “The security surrounding the president’s event [at Ogletree’s] was intense.’’

The only celebrity at the gallery was in a frame. Tunstull, who’s done portraits in the past of entertainment lawyer Amy Goldson and former soap star Patricia Hayling Price, pointed out his picture of influential record exec Sylvia Rhone, former president of Universal Motown Records. (The painting’s not for sale because Rhone already bought it.) This week, Tunstull told us, he’s working on a piece with former TV journalist Carole Simpson.

Last night, with the president out of sight, the action was in Vineyard Haven, where actor Morgan Freeman was honored for his work with the disaster preparedness organization Plan!t Now. A reception for Freeman was held at the West Chop home of lawyer James Ferraro. The Oscar winner had been at Tanglewood the night before, where he joined former Pops conductor John Williams onstage to narrate a selection from “The Reivers,’’ the 1969 movie based on William Faulkner’s last novel.

Earlier yesterday, Freeman played a round at Vineyard Golf Club, and spoke briefly with Obama.

“What I wanted to tell him is to get pissed off, get fighting mad,’’ the actor said. “But I know he won’t because he doesn’t think it’s politically smart.’’

Asked about Obama’s prospects for a second term, Freeman paused. “If I could vote for him 1,000 times, I would,’’ he said. “I think he’s been horribly sandbagged, and it makes me so angry.’’ 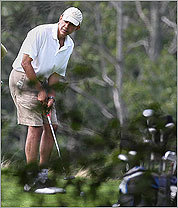