Cheers for the B’s 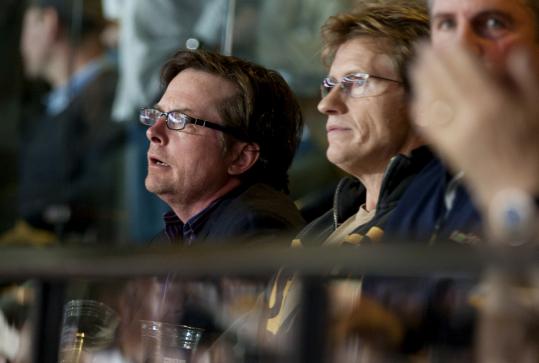 It was all aboard the Bruins bandwagon at the Garden last night. Having gutted their way to Game 6 of the Stanley Cup Final, the boys in the spoked-B sweaters suddenly found themselves at the center — the hub, you might say — of Boston’s sports universe. Never mind that many of those who paid a ransom to sit in the rafters couldn’t pick Milan Lucic out of a lineup just a month ago, it’s all good now. Of course, there were plenty of hardcore hockey types in the house last night, including Denis Leary, the “Rescue Me’’ star who is BFF with Bruins Hall of Famer Cam Neely. Also making a return trip to the Garden was “Family Ties’’ actor Michael J. Fox, who was here for the B’s Game 3 beatdown of the weak-kneed ’Nucks. . . . Senator John Kerry, a hockey fan from way back, was feeling confident before the game. “They can’t lose in this building. I’m serious,’’ said Kerry, who told us he still skates despite hip problems. “This is a great team who would have won Game 5 in Vancouver if it wasn’t for a lousy bounce. Psychologically, I just think it’s impossible for them to lose tonight.’’ . . . Other familiar faces in the crowd included Mayor Tom Menino, Police Commissioner Ed Davis, Joe Kennedy, Fenway Recordings owner Mark Kates, Greatest Bar’s Billy Fairweather, Strega owner Nick Varano, Liberty Hotel owner Dick Friedman, Lycos founder Bob Davis, State Room owner Jim Apteker, Davio’s owner Steve DeFillippo, SBLI’s Bob Sheridan, foremost flack George Regan, Reebok’s Paul Foster, comedian Lenny Clarke, chef Ming Tsai, Sox GM Theo Epstein and his brother Paul, former Sox ace Curt Schilling and his wife, Shonda, NHL greats Mark Messier and Wayne Gretsky, former NHL tough guy Tie Domi, president Jonathan Kraft, “Ted’’ director Seth MacFarlane and star Mark Wahlberg, NBA star Steve Nash, co-owner Steve Pagliuca, team president Rich Gotham, coach Doc Rivers, and Dropkick Murphy Ken Casey. . . . How crowded is the Bruins bandwagon? Very. Before last night’s game, Russian opera singer Elena Zoubareva was outside by the Bobby Orr sculpture schooling B’s fans on the proper technique for screaming. No kidding. According to Zoubareva, a B’s booster whose father was friendly with the great Russian goalie Vladislav Tretiak, haphazard hollering can be bad for your health. “When you scream like this, ‘Aaaggghhh,’ ’’ she said, giving us an earsplitting wail, “you could have injury. You could pop blood vessels and that could lead to polyps.’’ Of the major sports, hockey fans are at the greatest risk, she said, because they are, well, the most nuts. “People don’t take their voice seriously,’’ said Zoubareva. “Say you’re sitting down and all of a sudden you run a marathon. You wouldn’t do that. Why do you think you can use your voice in such a strenuous way?’’ . . . Just as they did before Game 3 the Canucks dined at Davio’s on the eve of Game 6. The team, including coaches, commandeered a whole section of the restaurant. Goalies Roberto Luongo and Cory Schneider were good guys, posing for a pic with a 9-year-old hockey fan. The ’Nucks noshed on steak and pasta and multiple bottles of red wine. . . . Meanwhile, Bruin Mark Recchi had a quiet dinner at Strega Waterfront.