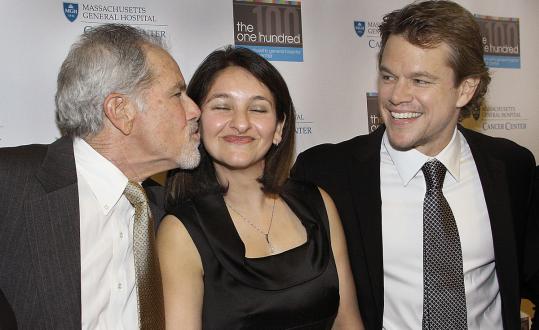 Matt Damon was in town last night to speak at a Mass. General Hospital Cancer Center event honoring 100 people and groups who’ve helped advance the fight against cancer. The actor was joined by his dad, Kent, who’s been treated for multiple myeloma in recent years, and Matt’s wife, Luciana Barroso. Chatting with reporters on his way into the Westin Boston Waterfront (after getting briefly stuck in the revolving door), Damon said his dad is “fighting the good fight.’’ Damon had not previously talked about his father’s cancer. As for his career, Damon told us he and Ben Affleck are still thinking of teaming on “The Trade,’’ about wife-swapping Yankee players Fritz Peterson and Mike Kekich. Damon said Sox fans will forgive him for donning pinstripes for the role. “I wear Boston on my sleeve,’’ he said. “I’ve been yelled at enough walking down the street in New York with my hat on that I’ve paid my dues.’’ In addition to last night’s honorees, who included philanthropists, doctors, and researchers, guests included Senator John Kerry, Damon’s “Bourne’’ costar Chris Cooper and wife Marianne Cooper, and Aerosmith bassist Tom Hamilton and wife Terry.