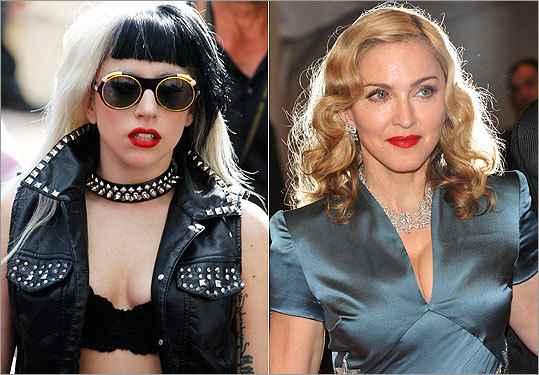 When Lady Gaga released her song “Born This Way’’ in February, the music world cried foul. The pop hit sounded too much like Madonna’s “Express Yourself,’’ critics protested. But the Material Girl stayed mum on the issue.

That’s what you do when you’re family.

According to Boston celebrity genealogist Chris Child, who painstakingly pores over documents searching for connections between notable people at the New England Historic Genealogical Society, the two singers share more than a penchant for reinvention: Lady Gaga and Madonna are related.

“They are ninth cousins once removed,’’ Child said with a sly grin.

He presented a handwritten piece of paper, which traced the relations of Madonna Louise Veronica Ciccone and Stefani Joanne Angelina Germanotta back to a French immigrant farming couple who came to Quebec in the 1600s. Born this way, indeed.

“When I saw that Lady Gaga had French Canadian ancestry I thought there might be something there,’’ said Child, who started working at the Newbury Street institution as a 16-year-old intern in 1997.

Child’s interest in genealogy and its pop-culture connections comes at a moment when people can’t seem to get enough of their ancestral past. What was once a hobby for retirees has become downright popular. Harvard’s Henry Louis Gates’s fascination with genealogy has led to popular documentaries on the topic, including one tracing Oprah Winfrey’s family history. The NBC show “Who Do You Think You Are?’’ has uncovered the roots of celebrities such as Sarah Jessica Parker and Ashley Judd. (Both actresses visited the NEHGS with camera crews to plunge into their pasts.) The number of subscribers to Ancestry.com, a website where users can search long lost relatives and create family trees online, is surging.

Dressed in a dark suit with cufflinks and understated glasses, Child, 30, doesn’t look the part of one who spends his days wading through papers of the rich and famous. As a genealogist for the Newbury Street Press, the publication arm of NEHGS, he edits a genetics column and is the go-to guy when members are stuck on a limb of a challenging family tree. His encyclopedic memory and youthful energy combine for some fascinating finds. He’s linked Ben Affleck and Matt Damon, solved the mystery of Abraham Lincoln’s true grandparents and connected Mark Wahlberg to “The House of the Seven Gables’’ author Nathaniel Hawthorne.

“It comes as an extension of my interest with presidents and historical figures and how they relate to current personalities,’’ said the Jamaica Plain resident.

Child first visited the stately NEHGS building as an 11-year-old Boy Scout, and he took to genealogy immediately. “I found it initially overwhelming, but I got into it right away. I knew I had a special skill and could retain the information.’’

Dates, decades, which Mayflower descendants have presidential ties, are all top of mind for Child. If he doesn’t have the answer, he knows which book or database holds the missing piece.

A strong command of history helps when heritage hunting with minimal clues. His knowledge of early New England migration patterns and the prominent families who settled here is significant. “When you are trying to figure it out, it helps to know how people traveled, where they went, how they lived,’’ said Child, who studied history at Drew University in New Jersey.

Child has worked full-time for the society since 2003. When he isn’t editing columns, he’s tracing bloodlines of notable figures to see if there’s an unusual connection. His work immerses him in the Irish famine, the Civil War, the Dust Bowl and, lately, “The Ellen DeGeneres Show,’’ where a chart he created of the host’s family connections was shown on air.

“I’ll work on this at any given time if someone pops into my head,’’ said Child. “We’ll go full force on someone’s ancestry if they are in the news.’’

Like, say, a certain new member of the British royal family. “The Ancestry of Catherine Middleton,’’ written by the late William Addams Reitwiesner and edited by Child, traces the history of Prince William’s new wife and her family. The book has been released in conjunction with the royal wedding.

Contacting British officials, sending fees through the mail, and waiting for documents from overseas took longer than usual. But some of Child’s additional research paid off. Turns out Middleton is fourth cousins with British filmmaker Guy Ritchie, which may explain why Madonna’s ex was present at Westminster Abbey for the April 29 nuptials.

More surprising? The new Duke and Duchess of Cambridge were related before they tied the knot.

A distant connection through Princess Diana’s ancestry links the newlyweds, which is not so unusual in such circles. “Queen Elizabeth II and Prince Philip are third cousins,’’ Child noted.

Middleton is also related to talk show host DeGeneres, who has become the genealogical equivalent of Kevin Bacon. Child worked on DeGeneres’s genealogy in 2008, when her show contacted the society. Last year DeGeneres gave considerable airtime to the chart Child produced linking her with Halle Berry, Richard Gere, Princess Diana, and others.

Like most skills, tracing kinship back in time is more complex than jumping online. Child spends weeks and sometimes months cross-referencing wills, census records, marriage and death certificates, and visiting town halls for records not available in his databases. Other times, such as if there’s a French Canadian pedigree, Child can “trace a line back 200 years within minutes,’’ thanks to priests in Quebec who indexed all marriages from the 1600s to the 20th century.

The society’s chief executive, D. Brenton Simons, credits Child’s work with breathing new life into a practice that dates back to the 17th century. Early family records were done by needlework or pen and ink calligraphy. “It’s no longer seen as an elitist, old-fashioned pursuit,’’ said Simons, the president of NEHGS. “We’ve made it current and fun and interesting.’’

Child’s genius, says Simons, is almost innate. “He is a world talent. We can throw any genealogical riddle his way.’’

How good is he? “When I’m tracing someone’s ancestry and I come across someone from the 17th century, I’ll say ‘Oh that could be a relative of [President] Obama.’ That’s how my mind works,’’ said Child, who knows that 20,000 immigrants came to America between 1620 to 1640, the same period Obama’s ancestors settled in Barnstable and Haverhill.

“I’ll remember a lot of things about couples from 400 years ago, not so much about things today.’’

The mysteries he uncovers are not gruesome, but they can be unusual. “Sometimes you are debunking a family myth,’’ said Child, who is part sleuth, part historian. Other times, as in the case of a man in the 1880 Census who listed two wives — one as “invalid,’’ the other as “mistress’’ — his findings are better left in the past.

Child’s first love is tracing presidential ties, which led to a link between Hillary Rodham Clinton and Angelina Jolie (they are ninth cousins twice removed). When Scott Brown ran for US senator, Child discovered that Brown and President Obama share kin going back 10 generations.

He’s currently working on family trees for 2012 presidential hopefuls Newt Gingrich and Michele Bachmann. As for Donald Trump? “Not yet,’’ Child said. 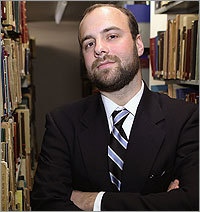 Wonder who else is related? We took a peek and it looks like it truly is a small (A-list) world after all.
Your comment is subject to the rules of our Posting Policy
This comment may appear on your public profile. Public Profile FAQ