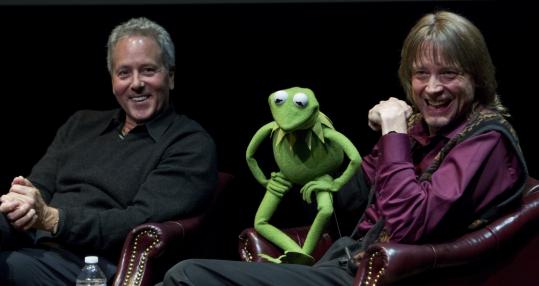 The last time movie producer David Hoberman spoke at Suffolk University, he talked about “The Fighter,’’ which he coproduced with one of its stars, Mark Wahlberg. Hoberman was back at Suffolk on Thursday to talk about his latest project: “The Muppets’’ reboot featuring Kermit the Frog and written by Muppet enthusiast and actor Jason Segel. Hoberman not only dished about Kermit, he brought him onstage — with help from Steve Whitmire, who started puppeting Kermit after the death of Jim Henson. The audience asked Kermit questions and watched a montage from the movie, which also stars Amy Adams, Emily Blunt, Rashida Jones, Billy Crystal, and the Bay State’s own Chris Cooper. Of course, we had to ask Hoberman whether he is in on Wahlberg’s plans for a sequel to “The Fighter.’’ All he would tell us is that there’s “more story to tell’’ about Lowell’s Micky Ward and his fights against Arturo Gatti.