Moving men get a lift from reality TV 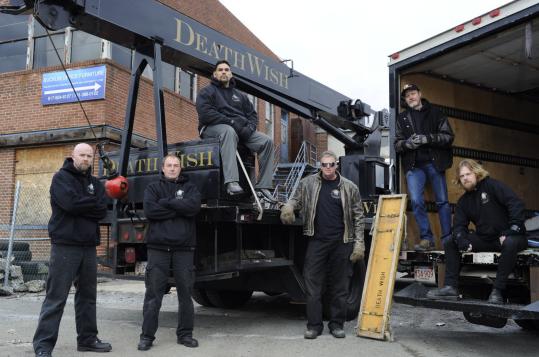 Greg Keane works way too much to watch reality TV. But be in a show? No problem. Keane is the star of “Deathwish Movers,’’ a new Travel Channel series premiering tomorrow night. The unscripted show follows Keane’s Malden-based company, Deathwish Piano Movers, which specializes in moving unwieldy objects. “We did a bathtub two weeks ago that weighed 3,000 pounds and was carved out of a single piece of marble,’’ says Keane. “No one else wanted to touch it, but that’s right up our alley.’’ (Who owns a 3,000-pound marble tub? A resident of Weston, of course.) What’s the secret to being the high priest of heavy lifting? “You gotta be a little smarter than the object you’re moving,’’ says Keane, who has a crew of 20 employees. “This isn’t a game for big strong dumb guys.’’ And — always — before he starts a move, he considers the worst-case scenario. “Murphy’s Law is a big part of the job,’’ says Keane, only half joking. “Deathwish Movers’’ may not make Keane a household name like, say, “Dog the Bounty Hunter’’ star Duane “Dog’’ Chapman, but that’s fine with him. “My expectation?’’ he said. “For the phone to ring so my employees have work.’’