THIS STORY HAS BEEN FORMATTED FOR EASY PRINTING
More Celebrity news 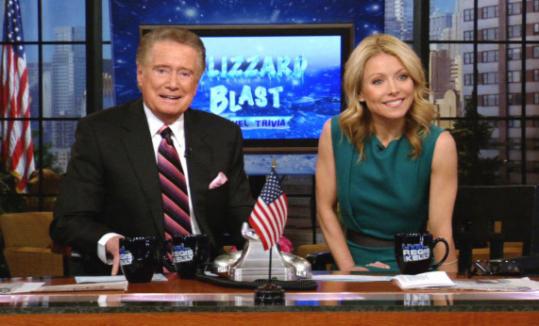 Regis Philbin (with Kelly Ripa) said on the air yesterday that he will retire this summer. (Disney-ABC Domestic Television via AP)
Associated Press / January 19, 2011

Regis Philbin announced yesterday that he’s retiring from “Live With Regis and Kelly.’’ Philbin has hosted his show for more than a quarter-century, most recently sharing hosting duties with Kelly Ripa. He said he would step down around the end of the summer. The show’s distributors, -ABC Domestic Television, said in a statement the “Live’’ franchise will continue, adding that a new cohost will be named to join Ripa, who marks 10 years with the show next month.

Campbell’s fee cut
Some of the fees a British tabloid had to pay supermodel Naomi Campbell after losing a lawsuit were too high, a court ruled yesterday. The European Court of Human Rights ruled against the paper having to pay the “success fee’’ Campbell agreed to pay her lawyers on top of other legal costs, arguing it didn’t fit the offense. In 2004, Campbell won her battle against the Daily Mirror, which printed photographs in 2001 showing her leaving a drug counseling meeting. Britain’s highest court ruled the paper breached Campbell’s privacy by running the photos and a story detailing her treatment, and awarded her more than 1 million pounds.
Film company settlement
Cosmetics magnate Ronald Perelman has ended his legal fight with ex-wife Ellen Barkin over a movie production company they started while married but squabbled over for years after divorcing, according to court records and Barkin’s lawyers. The chairman and the actress settled the lawsuits over Applehead Pictures, according to Barkin lawyer Jacob W. Buchdahl. The settlement came after an appeals court ruled against Perelman last month in one of the lawsuits, saying he owed more than $4.3 million to Applehead.
Estate case to Supreme Court
The Supreme Court yesterday considered whether Anna Nicole Smith’s estate legally deserves some of the $1.6 billion estate left behind by her late Texas billionaire husband. The justices listened to arguments from a lawyer of the deceased former Playmate, whose estate is locked in a battle for money they say was promised to her by her husband, oil tycoon J. Howard Marshall. The two were wed in 1994 when he was 89 and she 26. Marshall died the next year, and his will left his estate to his son, E. Pierce Marshall, and nothing to Smith, whose real name was Vickie Lynn Marshall. Smith challenged the will, and a bankruptcy judge awarded her $475 million from Marshall’s estate, with a federal judge reducing that amount to $89 million in 2002.
Linney gets back to work
Laura Linney was to return to Broadway’s “Time Stands Still’’ last night for the first time since her father’s death. Romulus Linney, a prolific playwright whose work ranged from stories set in Appalachia to the Nuremberg trials, died Saturday in upstate New York. The actress dropped out of the play over the weekend. She wasn’t on hand to accept her Golden Globe Award Sunday night for her role in Showtime’s “The Big C.’’
Hairdon’t
“How do I say this? I think it was the ugliest haircut I’ve ever seen.” — Jennifer Aniston, talking about “The Rachel” (right), the ’do she sported in the mid-1990s on the sitcom “Friends.”