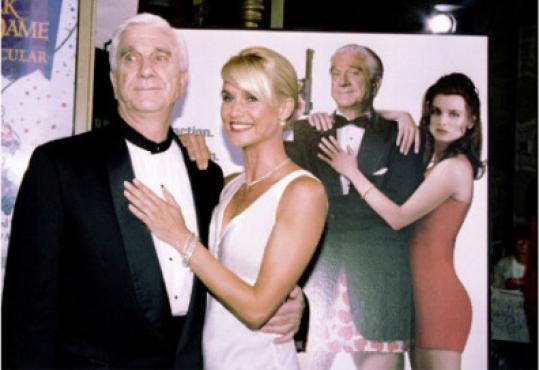 LOS ANGELES — Leslie Nielsen, who traded in his dramatic persona for inspired bumbling as a hapless doctor in “Airplane!’’ and the accident-prone detective Frank Drebin in “The Naked Gun’’ comedies, died yesterday in Fort Lauderdale, Fla. He was 84.

The Canadian-born actor died of complications from pneumonia at a hospital near his home at 5:34 p.m., surrounded by his wife, Barbaree, and friends, his agent, John S. Kelly, said in a statement.

“We are saddened by the passing of beloved actor Leslie Nielsen, probably best remembered as Lieutenant Frank Drebin in ‘The Naked Gun’ series of pictures, but who enjoyed a more than 60-year career in motion pictures and television,’’ said Kelly.

Mr. Nielsen came to Hollywood in the mid-1950s after performing in 150 live television dramas in New York. With a craggily handsome face, blond hair, and 6-foot-2-inch height, he seemed ideal for a movie leading man.

Mr. Nielsen first performed as the king of France in the Paramount operetta “The Vagabond King’’ with Kathryn Grayson.

The film — he called it “The Vagabond Turkey’’ — flopped, but MGM signed him to a seven-year contract.

His first film for that studio, as the spaceship commander in the science fiction classic “Forbidden Planet,’’ was auspicious. He found his best dramatic role as the captain of an overturned ocean liner in the 1972 disaster movie, “The Poseidon Adventure.’’

He became known as a serious actor, although behind the camera he was a prankster. That aspect of his personality was never exploited until “Airplane!’’ was released in 1980 and became a huge hit.

As the doctor aboard a plane in which the pilots, and some of the passengers, become violently ill, Mr. Nielsen says they must get to a hospital right away.

“A hospital? What is it?’’ a flight attendant asks, inquiring about the illness.

When he asks a passenger if he can fly the plane, the man replies, “Surely you can’t be serious.’’

Mr. Nielsen responds: “I am serious, and don’t call me Shirley.’’

Critics argued he was being cast against type, but Mr. Nielsen disagreed.

“I’ve always been cast against type before,’’ he said, adding comedy was what he always wanted to do.

It was what he would do for most of the rest of his career, appearing in such comedies as “Repossessed’’ (a takeoff on the demonic possession movies like “The Exorcist’’) and “Mr. Magoo,’’ in which he played the title role of the good-natured bumbler.

Mr. Nielsen did play Debbie Reynolds’s sweetheart in the popular “Tammy and the Bachelor,’’ a loanout to Universal, and he became well known to baby boomers for his role as the Revolutionary War fighter Francis Marion in the TV adventure series “The Swamp Fox.’’

Unhappy with his roles at MGM, he asked to be released from his contract. As a freelancer, he appeared in a series of undistinguished movies.

“I played a lot of leaders, autocratic sorts; perhaps it was my Canadian accent,’’ he reasoned.

Meanwhile, he remained active in television in guest roles. He also starred in his series, “The New Breed,’’ “The Protectors,’’ and “Bracken’s World,’’ but all were short-lived.

Then “Airplane!’’ captivated audiences and changed everything.

Robert Stack, Peter Graves, Lloyd Bridges, and Nielsen were hired to spoof their heroic TV images in a satire of flight-in-jeopardy movies. After the movie’s success, the filmmaking trio of Jim Abrahams and David and Jerry Zucker cast their newfound comic star as Detective Drebin in a TV series, “Police Squad,’’ which trashed the cliches of “Dragnet’’ and other cop shows. Despite good reviews, NBC canceled it after only four episodes. “It didn’t belong on TV,’’ Mr. Nielsen later said. “It had the kind of humor you had to pay attention to.’’

The Zuckers and Abraham converted the series into a feature film, “The Naked Gun,’’ with George Kennedy, O.J. Simpson, and Priscilla Presley as Mr. Nielsen’s costars. Its huge success led to sequels “The Naked Gun 2 1/2’’ and “The Naked Gun 33 1/3.’’

His later movies included “All I Want for Christmas,’’ “Dracula: Dead and Loving It,’’ and “Spy Hard.’’

Between films he often turned serious, touring with his one-man show on the life of the great defense lawyer, Clarence Darrow.

He grew up 200 miles south of the Arctic Circle at Fort Norman, where his father was an officer of the Royal Canadian Mounted Police. The parents had three sons, and Mr. Nielsen once recalled, “There were 15 people in the village, including five of us. If my father arrested somebody in the winter, he’d have to wait until the thaw to turn him in.’’

The elder Nielsen was a troubled man who beat his wife and sons, and Leslie longed to escape. As soon as he graduated from high school at 17, he joined the Royal Canadian Air Force, even though he was legally deaf. (He wore hearing aids most of his life.)

Mr. Nielsen later worked as a disc jockey at a Calgary radio station, then studied at a Toronto radio school operated by Lorne Greene, who would go on to star on the hit TV series “Bonanza.’’ A scholarship to the Neighborhood Playhouse took him to New York.