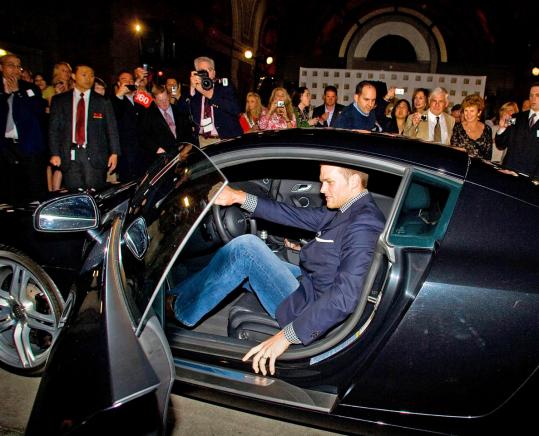 Last month’s early-morning car crash that left one person injured but Tom Brady unharmed was more than a close call for the quarterback. It was also a great marketing opportunity.

Within hours, just about everyone knew that the superstar athlete with a supermodel wife drove an Audi worth $97,000.

In the days that followed, the Globe learned that Brady’s car was a perk, part of an endorsement deal with Audi of America Inc. Since 2007, Brady has acted as “honorary chairman’’ of Best Buddies International Inc., a charity that helps learning-disabled adults, and in that role he makes appearances at fund-raisers, giving participants rides in his Audi.

Anthony Kennedy Shriver, Best Buddies founder and chairman, introduced Brady to Audi, which also loans Shriver and his wife two cars for them to drive.

The Brady-Audi-Best Buddies connection is part of a world known as cause marketing, an arrangement that allows a corporation to affiliate with a charity and celebrities to burnish its public image and — potentially — boost sales. The charity, in turn, benefits from the exposure and increased marketing power that come from a corporate ally.

For example, U2 frontman Bono pitches for Louis Vuitton and donates his undisclosed fees to help nonprofits in developing countries. Pop star Lady Gaga, for an undisclosed fee, promotes a line of MAC lipstick, with a portion of sales benefiting AIDS research.

It’s an arrangement based on mutual benefits, said Howard Anderson, a professor of entrepreneurship at the Sloan School of Management at the Massachusetts Institute of Technology.

“Everyone wants to do good and do well at the same time,’’ he said.

The arrangements are especially valuable to companies because re search has shown that consumers tend to prefer products with a charity connection. A recent survey by the Boston marketing firm Cone found that 73 percent of people between the ages of 15 and 35 were “willing to try a new product they’ve never heard of if it supports a cause.’’

Alison daSilva, Cone executive vice president, said cause marketing is a “key differentiator in which companies win the hearts and wallets of their consumers.’’

About 80 percent of Fortune magazine’s top 200 US companies have a “branded cause-related initiative’’ involving a charity, daSilva said. According to the IEG Sponsorship Report, an industry publication, corporate spending on cause marketing was projected to grow about 6.1 percent this year, to $1.61 billion.

Celebrities like Brady or Bono can heighten the return on the investment, she said. “They’re definitely worth the money,’’ daSilva said of the celebrities. “It has proved to be an effective marketing strategy.’’

Ken Berger, chief executive of Charity Navigator, a nonprofit that tracks charity effectiveness, said the marketing relationships can turn problematic when the public suddenly becomes aware that a celebrity is paid for an endorsement of a cause instead of promoting it out of a sense of altruism. Berger said those revelations can raise questions in donors’ minds about a celebrity’s dedication to a cause and potentially hurt fund-raising.

That’s why some nonprofits and celebrities don’t publicize such transactions, he said.

“That’s why a lot of this stuff flies under the radar and these kind of arrangements are not usually very public,’’ Berger said.

Audi, which has sponsored Best Buddies since 2007, loans as many as 35 cars at a time to the Miami nonprofit for high-profile fund-raisers in locations such as Hyannis Port and the Hearst Castle in California. In exchange, Audi gets its five-rings logo prominently placed on the charity’s website, displays its cars at fund-raisers, and on riders’ shirts, including those worn by actors Rob Lowe, David Hasselhoff, and musician Kenny G, as well as Maria Shriver, wife of the governor and sister of Anthony Kennedy Shriver.

In press releases, Audi emphasizes that it has helped Best Buddies raise millions of dollars, and that Audi dealers and partners have donated as much as $170,000 to the cause. Audi does not say whether — in addition to giving Brady a car — it pays the quarterback for his endorsement.

Neither Brady nor his agent returned phone calls from the Globe.

“You don’t understand how incredibly hard it is to get a company to step up and give money like that for people with intellectual disabilities,’’ he said. “We’re really lucky they’re doing this.’’

Shriver said Brady had participated in Best Buddies charity bicycling events for free, riding at the urging of his sister and manager Nancy, without any kind of corporate endorsement. Shriver said he told Audi he thought Brady would be “a great fit’’ in its “VIP Ambassador’’ program, helping spur a formal endorsement deal.

The VIP Ambassador program is a marketing effort to get celebrities and influential people to drive Audis by offering them cars to drive for free. Other former Audi ambassadors include musicians Justin Timberlake and Seal. Shriver and his wife are also “VIP Ambassadors,’’ and he said he drives an Audi Q7 and his wife has an Audi A8 sedan.

“This is a gigantic home run for everybody,’’ Shriver said.

“We certainly don’t want them driving another manufacturer’s cars,’’ he said.