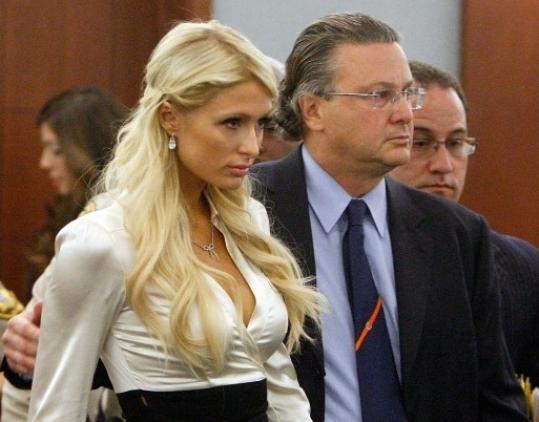 Paris Hilton pleaded guilty yesterday to misdemeanor charges stemming from her cocaine arrest last month at a Las Vegas resort. The 29-year-old heiress and socialite avoided jail time by acknowledging that she had cocaine in her purse and lied to police. She was ordered to serve a year of probation, complete a drug abuse program, pay a $2,000 fine, and serve 200 hours of community service. (AP)

Singer-songwriter Bruno Mars was found with a bag of cocaine in a Las Vegas casino bathroom following a nightclub show over the weekend, police said yesterday. The crooner was arrested Sunday after being detained by security at the Hard Rock Hotel & Casino. Mars, whose real name is Peter Hernandez, was found with 2.6 grams of cocaine and booked on suspicion of possession of a controlled substance, police said. (AP)

A judge yesterday issued an arrest warrant for Lindsay Lohan after she acknowledged failing a drug test. The actress could wind up back behind bars if she is found to have violated probation. Lohan, 24, will remain free pending a court hearing Friday in Los Angeles. She confirmed on her Twitter page last week that she failed a court-ordered drug and alcohol screening. She spent two weeks in jail this year after violating probation stemming from convictions involving her 2007 arrests for drug use and driving under the influence. (AP)

The father of sextuplets, who stars on a cable television reality show about raising them, was charged with domestic violence while visiting family in Arizona. Bryan Masche, 32, who stars in “Raising Sextuplets’’ on WE TV, yelled at and threatened his wife and another family member at a relative’s home in Camp Verde, authorities said. Jenny Masche told authorities the argument stemmed from marital issues and her husband wanting to take the children to Lake Havasu City. (AP)

Randy Quaid and wife out on bail

Actor Randy Quaid and his wife have been released on bail after their weekend squatting arrests for moving into a home they reportedly sold years ago in California. Santa Barbara County sheriff’s spokesman Drew Sugars said the Quaids were arrested Saturday after an alarm went off at the Montecito home and the couple was found living in a guest house. (AP)

[an error occurred while processing this directive]
More in the new Names blog
Your comment is subject to the rules of our Posting Policy
This comment may appear on your public profile. Public Profile FAQ