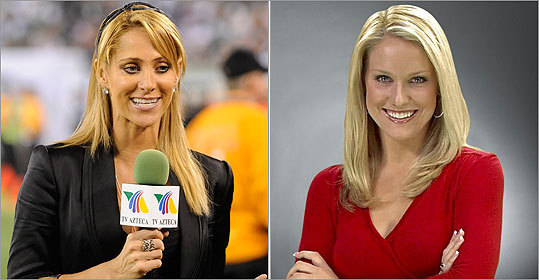 Heidi Watney might want to think before speaking next time. Talking yesterday about the controversy involving the and a female journalist who claims she was made to feel “uncomfortable’’ in the team’s locker room, the Sox sideline reporter basically blamed the woman. Appearing on WZLX’s “Karlson & McKenzie’’ show, Watney said she knows next to nothing about the story, but still suggested Ines Sainz was harassed because “she does outlandish things, that’s part of her shtick. . . . Not that you have it coming, but in this world you set yourself up for things.’’ Watney went on to say: “I know that she’s the reporter who showed up at the Super Bowl with the wedding dress on for Tom Brady.’’ In fact, she’s not that reporter. Another correspondent, Ines Gomez Mont, wore a wedding dress to media day at the Super Bowl. Watney, who’s been romantically linked to at least one ballplayer in the past, said, “You yourself are held to a standard of behavior, so you can’t blame other people around you.’’