Making the scene at the ESPYs 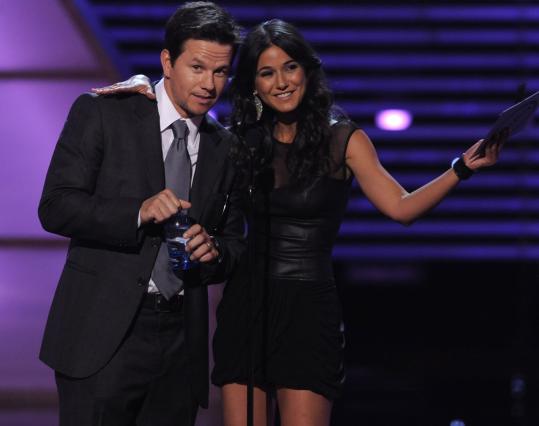 New England had a good showing at the ESPYs the other night. Besides host Seth Meyers, who’s a Bedford, N.H., native and a fan, the awards show featured Dorchester’s Mark Wahlberg, who with “Entourage’’ star Emmanuelle Chriqui presented the “Best Female Athlete’’ honor to Olympic gold medalist Lindsey Vonn. . . . Locally, Hall of Famer Jim Rice was at Game On! to sign autographs yesterday. He was joined by NESN’s Tom Caron.

Joe Perry treated and released after crash
Aerosmith guitarist Joe Perry was treated and released from a hospital yesterday after being rear-ended by a car while he was riding a motorcycle in Middleborough. The extent of Perry’s injuries was not disclosed, but the 59-year-old ax man was transported to Morton Hospital and Medical Center in Taunton after the crash, which occurred around 2 p.m. Police said Perry was on his motorcycle, heading east on Route 44, when he was struck from behind by a sedan traveling at low speed. (The rocker was checked into the hospital under his given name, Anthony Perry.) Police didn’t immediately ID the driver of the other vehicle, saying the incident is still under investigation. Aerosmith, who recently played a string of shows in South America and Europe, is slated to play Fenway Park Aug. 14. The band has been beset by illness and injury over the past few years. Perry had knee-replacement surgery in 2008; singer Steven Tyler fell off a stage in South Dakota, breaking his shoulder; bassist Tom Hamilton was diagnosed with throat cancer in 2006 and underwent radiation and chemotherapy; and guitarist Brad Whitford missed part of last summer’s tour after bumping his head getting out of a Ferrari. The band’s rep, Liz Rosenberg, told us yesterday, “Joe is home and he’s fine. All’s well and we’re all grateful.’’

Baldwin connects with the Kennedys and Mass.
Alec Baldwin says his big plan for Tanglewood this weekend is to keep the attention away from himself and on the music. On Sunday, he’ll narrate “The Dream Lives On: A Portrait of the Kennedy Brothers,’’ the same program that debuted at Symphony Hall in May with narrators Robert De Niro, Morgan Freeman, and Ed Harris. Baldwin says the material is good enough to stand on its own. He won’t act, he’ll just read. “The trick is not to get in the way. The words are very powerful.’’ The gig is a personal one for the politically active Baldwin, who’s been a friend to the Kennedy family for years. “I had a great relationship with Ted Kennedy. Michael [Kennedy] and I did a lot of campaigning together,’’ Baldwin told us by phone from New York recently. Baldwin recalled a visit to the Kennedy home where he looked at a wall of family photographs and was heartbroken to notice that after a certain year, two of the Kennedy patriarchs go missing. “You see that Ted became the father to all of these kids.’’

After talking Kennedys with Baldwin, we had to ask about rumors that he’ll be leaving “30 Rock’’ as soon as his contract is up. Baldwin confessed that he did tell a reporter that he assumed he’d be done with “30 Rock’’ in 2012 — but only because the show’s contract ends that year. “Everyone has a six-year contract. After that, our contract is up. As of now, there is no show after that.’’ Baldwin (inset) said he’s enjoyed this season of the show, particularly because of all of the jokes about Massachusetts. His character, Mass. native Jack Donaghy, spends much of the season romancing Julianne Moore, who plays a Waltham redhead with a terrible Boston accent. As for Moore’s take on the Boston drawl, Baldwin said he’s heard mixed reviews — although he assumes Bostonians will always be critical of outsiders who mimic them. “Bostonians are like Parisians when it comes to their accents.’’ Tickets for Baldwin’s Sunday performance in Lenox are still available. The show also features Arlo Guthrie.

Spread formation
Work continues on the carbon footprint — we mean house — belonging to Pats QB Tom Brady and his supermodel spouse, Gisele Bundchen. The enormous spread in the exclusive LA neighborhood of Brentwood reminds us of the “Star Wars’’ city of Mos Eisley on the planet Tatooine. Wow. The couple paid $11 million for the 3.75-acre property and spent many millions more on the house, which is being built by Boston-based Suffolk Construction. The 22,000-square-foot mansion will have eight bedrooms, a covered bridge, six-car garage, and a lagoon-shaped swimming pool.

The trailer for “The Social Network’’ finally hit the Internet yesterday. The film, directed by David Fincher, written by Aaron Sorkin, and costarring Jesse Eisenberg and Justin Timberlake, is about the travails of Facebook cofounder Mark Zuckerberg and his Harvard classmates. The trailer, which looks promising, is set to Vega Choir’s rendition of Radiohead’s “Creep.’’ The movie, partially shot in Boston (though not at Harvard) is opening the New York Film Festival Sept. 24.

John Ellement of the Globe staff and Globe correspondent Lauren Finch contributed. Read the Names blog at www.boston.com/namesblog. Names can be reached at names@globe.com or at 617-929-8253.