They’ve got some friends 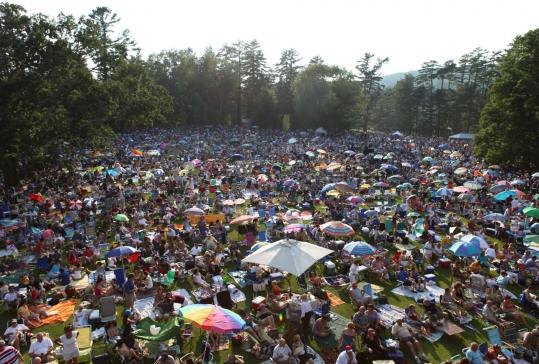 An estimated 75,000 fans attended three weekend shows by Carole King and James Taylor at Tanglewood, including this one on Saturday.
By Mark Shanahan & Meredith Goldstein Globe Staff / July 7, 2010

It wasn’t quite Woodstock, but Tanglewood was teeming with people over the weekend, as an estimated 75,000 people turned out for James Taylor and Carole King’s three shows at the BSO’s summer home. Each night, the lawn was packed two hours before show time, and cars were wedged every which way in the parking areas. VIPs making the scene included cellist Yo-Yo Ma, who sat in on “Sweet Baby James’’ and “You’ve Got a Friend,’’ actress Laura Linney, actress Idina Menzel and her handsome husband, Taye Diggs, “Rescue Me’’ star Denis Leary and wife Anne, pianist Emanuel Ax and conductor Michael Tilson Thomas, singer Louise Goffin, whose mom is King and dad is Gerry Goffin, and, of course, Taylor’s wife, Kim, who sang back-up on “Mexico.’’ (All proceeds from the July Fourth show went to Tanglewood.) King may want to relocate to Western Mass. The AP reported yesterday that the singer has put her 128-acre ranch in central Idaho on the market with a “reduced’’ asking price of $16 million. The Robinson Bar Ranch compound includes a 7,300-square-foot lodge, a residence, a caretaker’s home, a professional recording studio, guest cabins, and horse barns. King put the ranch up for sale in 2006 for $19 million.

Getting out the vote
Call it constituent service. Senator John Kerry sent an e-mail to supporters yesterday asking them to help make Sox first baseman Kevin Youkilis an All-Star. “All 3 million of you in the johnkerry.com community have done incredible work these last seven years on some of the biggest fights of our lives. This isn’t one of them,’’ Kerry wrote. “But it’s not small potatoes either if you’re a fan.’’ Kerry was upset because Youk was trailing Yankee Nick Swisher in MLB’s All-Star balloting. “Swisher’s having a fine year, but Youk is better in just about every category: batting average, slugging, home runs, everything, and he plays Gold Glove defense to boot,’’ wrote Kerry. Totals yesterday showed Youk had taken the lead. Wrote Kerry: “Please don’t let anyone say that Swisher beat Youkilis because Sox fans have gone a little soft after ’04 and ’07. . . . Youk deserves to be in the All-Star game — while the team has grinded it out in spite of injury after injury, he’s been a rock.’’
Record setter
In other Youk news, Rounder Records is releasing a compilation CD benefiting the should-be All-Star’s charity, Hits for Kids, as well as Christopher’s Haven. Called “Music Hits Home,’’ the collection includes tunes by the Dave Matthews Band, Springfield’s own Staind, Stoughton singer Lori McKenna, Will Dailey, the Dropkick Murphys, Phish’s cover of Boston’s “Foreplay/Longtime,’’ and the Allman Brothers’s “Black Hearted Woman,’’ recorded live at the Center. Youkilis will sign copies of the disc July 16 at the Newbury Comics in Faneuil Hall.
Gandolfini in town
“Sopranos’’ star James Gandolfini was spotted having lunch at Joe Milano’s Union Oyster House yesterday and, later, enjoying gin and tonics at Russell House Tavern. He told locals he was in town to research an upcoming role — someone who attended Phillips Academy and Harvard. Seems like that could be a lot of people. We don’t see any Andover/Harvard parts in Gandolfini’s immediate future. According to the Internet Movie Database, Gandolfini is set to play music promoter Freddy Cousaert in a biopic about Marvin Gaye. We hear Gandolfini also recently extended his option to adapt former Globe writer Anthony Flint’s book “Wrestling With Moses,’’ about the battles between Jane Jacobs and Robert Moses.
The Big Papi nonstory
We were interested to read the profile of David Ortiz in the latest issue of The New Yorker. Too bad it doesn’t say anything. The author, Ben McGrath, manages to break no new ground in a six-page story about Big Papi’s resurgence. (The piece is promisingly titled “The Undead.’’) Ortiz is called “the most beloved baseball player New England has known in a generation . . . seemingly the least tortured and conflicted of sports heroes, without the cloying desperation of an A-Rod or the competitive hostility of a Clemens or the spacey indifference of a Manny.’’
Reign in Spain almost over
Boston Ballet dancers are scheduled to return from their monthlong trip to Spain on Friday. They’ve been hard at work, performing at venues such as Barcelona’s Teatro Coliseum and at the Teatro Perez Galdos in Las Palmas de Gran Canaria. But don’t feel bad for the dance crew. According to principal dancer Misa Kuranaga, who just arrived back in Boston, there was plenty of time for play and tourism. “When we were in Granada, there’s the Castle — I think it’s called Alhambra — it’s kind of like an Islamic-influenced palace, all of these beautiful buildings. That was some of the favorite sightseeing,’’ Kuranaga told us, adding, of her diet abroad, “I ate a lot of paella. I know this sounds funny, but the tomato there tasted very good. I was eating a lot of tomatoes there.’’ Kuranaga said her dancer friends will spend the next few days hanging out and seeing more of the country now that performances are over. She had to head home early so that she could prepare to travel to Japan and then to Damian Woetzel’s dance festival in Vail. “They’re having a free vacation,’’ she joked, of her fellow dancers’ extra days off.
Twittering about
“The Office’’ star Mindy Kaling gave one last Twitter shout-out to her hometown, Boston, before heading back to Los Angeles. “Goodbye Coolattas, Kevin Garnett, Legal [Sea Foods], family compounds as normal thing, Barry & Elliot, Walden, and ethnic white people.’’ . . . Also being funny on Twitter was Newton-bred horror director and “Inglourious Basterds’’ star Eli Roth, who told fans that he and his “American Psycho’’ novelist pal Bret Easton Ellis had the same reaction when they saw “Toy Story 3.’’ “[We] were both traumatized by the end of Toy Story 3. American Psycho & Hostel got nothing on Woody & Buzz.’’ Ellis also tweeted, “At a party talking with Eli Roth about how wrenching Toy Story 3 was, and comparing notes on how much we cried during it.’’
Healthy topic
Sierra Leone and Maryland-bred safety Madieu Williams will be in town Saturday to speak at the Whittier Street Health Center’s Men’s Health Summit. Williams, who has his own foundation to help kids stay healthy, will tell his story and talk about the importance of staying in good shape. Yes, you can still register to see him.