Courtside with the rich and famous 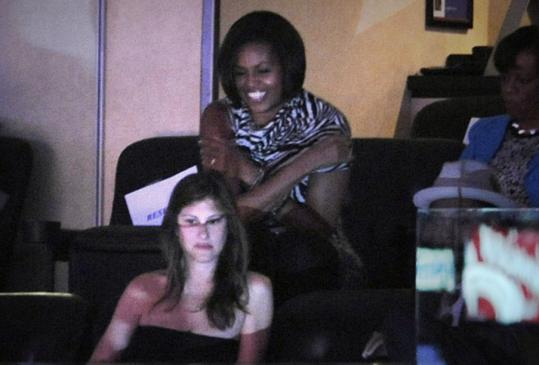 LOS ANGELES — What a shock.

No, not the earthquake that shook Southern Californians from their perpetual slumber Monday. We’re talking about all the beautiful people who scored tickets to Game 6 of the NBA Finals last night.

Courtside at the Staples Center was a refuge for the rich and famous as a who’s who from Hollywood turned out to cheer for the — well, mostly for the Lakers.

fans Maria Menounos and Dane Cook were right down front doing their best to irritate Pau Gasol’s partisans, while Nashua, N.H., native Mike O’Malley was screaming from a suite high above the action.

“This is crazy,’’ said Menounos, wearing a bedazzled Paul Pierce jersey. “I actually got a B-12 shot because I was getting so run-down rooting for these guys.’’ (About that jersey, Menounos told us she had to have one after seeing Ray Allen’s mom rock one at the Garden.)

Security at the Staples Center was especially tight last night because first lady Michelle Obama and daughters Sasha and Malia were in the arena, shepherded by the Secret Service just before tip-off. (Michelle’s brother Craig Robinson is the basketball coach at Oregon State.)

There’s no doubt who Spike Lee was rooting for. Strolling around the arena before Game 6, the “Do the Right Thing’’ director tugged on his Yankees hat and muttered, “There’s too much green in here.’’ Also there were regulars Jack Nicholson and his pal, music producer Lou Adler, Oscar winner Charlize Theron, Maroon 5 singer Adam Levine, actor Andy Garcia, jazz man Kenny G, and movie producer Joel Silver.

Three of the greatest centers of all time — Bill Russell, Bill Walton, and Kareem Abdul Jabbar — were mulling around the court before the game. Russell stopped to say hello to Celts owner Wyc Grousbeck and his wife, Corinne. (The courtside couple were easy to spot: He had on a dark suit with green socks and she had a green dress and emerald nail polish.)

Actress Dyan Cannon, balancing a purple-and-gold pompom and a plate of scallops and couscous on her lap, admitted she was nervous. A Lakers fan since Jerry West was a player, the 73-year-old actress said the playoffs always make her anxious.

“But these guys are great at crunch time, my dear,’’ said Cannon. “And this is crunch time.’’

Christina Aguilera treated the crowd to a soulful rendition of the national anthem. We tried to talk to her afterward, but the singer, so pale she looked almost porcelain, declined. Since she’s been spending so much of her time of late with Kim Kardashian, sister-in-law of Lakers forward Lamar Odom, we assume Aguilera was rooting for LA.

We also ran into Tyler McGill, the shaggy-haired surf shop owner from Rye, N.H., who walked from Boston to New York to get tickets to games 3, 4, and 5. The notoriety earned him a correspondent’s gig for CBS’s “Early Show.’’

Wahlberg and Snoop Dogg put their loyalties on the line
Never mind that boring bet between Hizzoner Tom Menino and Los Angeles Mayor Antonio Villaraigosa. How about rapper Snoop Dogg’s wager with the Celts’ No. 1 fan Donnie Wahlberg? The SoCal hip-hopper, who proudly wears the purple and gold of his beloved Lakers, bet the New Kid singer $20,000 that LA would have its way with Boston in the NBA Finals. (No, Wahlberg and Snoop aren’t tight, but they have met a few times and share a love of basketball.) “I was just minding my own business, and a bunch of people tweeted me about Snoop’s bet,’’ Wahlberg told us before last night’s Game 6. “My first thought was, of course, but I also thought it might be illegal and I don’t need the IRS coming after me.’’ So Wahlberg suggested they do it for their respective charities, the Mark Wahlberg Youth Foundation and the Snoop Youth Football League. Snoop said sure but also upped the ante, declaring that the loser has to wear the other team’s jersey for a week. “I’d rather walk around with 20 live skunks hanging from me than wear a Lakers jersey, but OK,’’ Wahlberg told us. Win or lose, he’s suggested the bet be settled onstage at New York’s Radio City Music Hall, where NKOTB play tomorrow, Friday, and Saturday. Wahlberg’s waiting to hear back. “I’ve always been a Snoop fan, obviously,’’ he said, “but this has been fun.’’
David: Report of affair with Gore is not true
Chilmark resident Laurie David — the ex-wife of “Curb Your Enthusiasm’’ star Larry David — says a Star magazine report claiming that she had a two-year affair with Al Gore isn’t true. David, who co-produced Gore’s 2006 Oscar-winning documentary, “An Inconvenient Truth,’’ told the Huffington Post yesterday that the Star story is a “total fabrication,’’ and that she has been in a serious relationship with someone else since her divorce. “I adore both Al and Tipper. I look at them both as family,’’ David said. Star reported yesterday that it had been told by an “insider’’ about an alleged affair between the former vice president and David, a fellow environmental activist. Al and Tipper Gore, who have been married 40 years, announced earlier this month that they’ve separated. Laurie David filed for divorce from Larry, the co-creator of “Seinfeld,’’ in 2007. At the time, she was rumored to have started a relationship with a Martha’s Vineyard developer.
Poehler earns a Webby for being one smart girl
Pride of Burlington Amy Poehler accepted the best actress honor at the Webby Awards on Monday for her Web series for children, “Smart Girls at the Party.’’ Poehler’s presenters were her husband, Will Arnett, and the couple’s pal Jason Bateman, who was recently spotted having dinner at Locanda Verde in New York City with Bostonians Matt Damon and John Krasinski and their respective partners Luciana Barroso and Emily Blunt. Damon and Blunt have been in the Big Apple doing reshoots for their upcoming film “The Adjustment Bureau,’’ while Krasinski has been there filming “Something Borrowed’’ with Kate Hudson. Other local Webby winners included Cambridge company Harmonix, which won for TheBeatlesRockBand.com; Boston Interactive, which won a People’s Voice Winner award for its ASPCA website; and Lawson Clarke, who won for his site Malecopywriter.com.
Life after ‘Chronicle’
Former “Chronicle’’ host Mary Richardson has a new gig. She’s been hired as community liaison for Caritas Christi Health Care. Richardson left “Chronicle’’ last month. . . . MassEquality has booked Macy Gray to perform at its benefit on Sept. 30. Gray duets with local boy Bobby Brown on the song “Real Love’’ on her new album, “The Sellout.’’ . . . Aerosmith guitarist Joe Perry was honored as “Riff Lord’’ at the 2010 Metal Hammer Golden Gods awards in London the other night. The Riff Lord starts his American tour with Steven Tyler and the boys next month.
Showing their pride
GLAAD president Jarrett Barrios and KISS 108’s Jim Clerkin hosted a Pride Kick-off party at the W Hotel the other night. Joining them for a photo was Suzanne Bump and W general manager William Bunce.
Around town
“Saturday Night Live’’ star Andy Samberg was spotted on the local set of “What’s Your Number?’’ on Monday. The Anna Faris comedy has been shooting around town and recently moved to the North Shore. Faris and her Sudbury-bred costar, Chris Evans, were also spotted the other night at Frank DePasquale’s new hot spot Splash Ultra Lounge & Burger Bar, where the twosome celebrated Evans’s 29th birthday with Arlington comedian Dane Cook. . . . Former Danity Kane singer Aubrey O’Day, who, like Cook, has been in town to root for the , was spotted at Cuffs, the bar at the Back Bay Hotel.