In LA, the stars lose a little luster 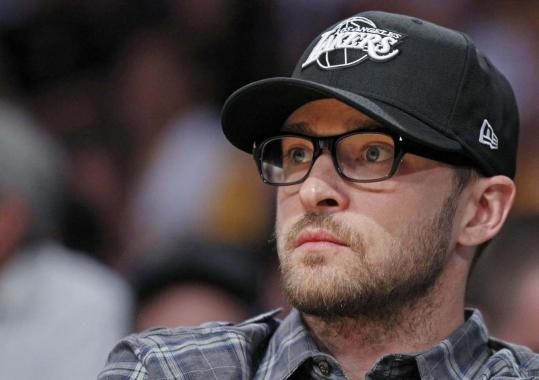 LOS ANGELES — The Lakers’ famously front-running fans were back at the Staples Center last night, but by the time Rajon Rondo and Ray Allen were done, many may have wished they’d skipped Game 2 of the NBA Finals and stayed at the beach.

“American Idol’’ winner Lee DeWyze handled the national anthem, telling us beforehand he’s not taking sides in the Finals. But in the same breath, the Illinois native said he hasn’t forgiven the C’s for eliminating his beloved Bulls from last year’s playoffs. Whatevs. Try to remember Lee’s last name because next year you won’t.

Just before tip-off, we ran into “Apprentice’’ alum Omarosa, whose surname we had forgotten. (It’s Manigault-Stallworth.) The woman once dubbed the greatest reality TV villain was all smiles as she walked arm-in-arm with “Green Mile’’ actor Michael Clarke Duncan. Omarosa said she was interested in the game — she’s predicting the in five — but also admitted she’s got a new show to promote, “Donald J. Trump Presents The Ultimate Merger.’’

As always, the ubiquitous Kardashian clan found the TV cameras without much trouble. Mother Kris and daughters Kim and Khloe paused to chat briefly before the game, and Khloe, whose husband is Lakers forward Lamar Odom, reiterated that, despite rumors to the contrary, she’s not pregnant.

Pats line up for Taylor
Seems twang-pop princess Taylor Swift, who donned a Pats jersey to close her performance at Gillette Saturday, has a few fans on the home team. In the house for Tay’s first stadium show with Justin Bieber were Julian Edelman, Brian Hoyer, and Jake Ingram. (Curiously, the superstar singer wore No. 13, which belongs to Pats rookie Buddy Farnham, who grew up in Andover and graduated from Brown.) Before the show, Swift tweeted: “It’s so hard to believe this is the last night of the Fearless tour — and that it’s in Gillette Stadium! I’m walking on a cloud today.’’ Dining at Davio’s at Patriot Place before the show was Pam DiFillippo, wife of the restaurant’s owner, Steve DiFillippo. Their daughter brought a few of her Taylor Swift-loving friends to the show.
Body by Gisele
Actress Rose Byrne says that if she appears confident wearing short shorts in the new Russell Brand comedy “Get Him to the Greek,’’ she has Gisele Bundchen to thank. Byrne says she got through the scenes by channeling Mrs. Brady. Byrne told herself, “I’ve just got to pretend that I’ve got a body like Gisele’s.’’
Biking with Brady’s buddies
Coiffed QB Tom Brady was surrounded by notable friends at his Best Buddies Challenge, which raised more than $4 million over the weekend. Joining him for the event — which had supporters biking from Boston to Hyannis Port — were, among others, “Austin Powers’’ actor Verne Troyer, Food Network star Guy Fieri, Miss Massachusetts Lacey Wilson, Patriot Dan Koppen, and coach Bill Belichick with girlfriend Linda Holliday, who looked like they were in it to win it on their bikes.
She’s hot on the Hub
Strolling down Newbury Street, Jill Zarin, the villainess on Bravo’s “Real Housewives of New York,’’ said she has just one regret. And, surprisingly, it has nothing to do with Bethenny Frankel, her frenemy on the show. Zarin wishes she had a child attending college in Boston. “Then I could come back here,’’ she said. Zarin was in town this weekend to attend her 25th college reunion at Simmons, and, of course, to hype her book, “Secrets of a Jewish Mother.’’ Does it bother her that she comes across so badly on the show? Not really. “It’s the way the it’s edited, but I can’t blame everything on that,’’ she said. “I actually have a lot of fans who see the cup as half full, not half empty.’’ And explaining why her daughter doesn’t go to school here, Zarin had this to say: “She didn’t want to go to BU, Emerson doesn’t have a photography department, and anyone can go to Harvard.’’
Saying goodbye to Sara
Longtime Boston entertainment reporter Sara Edwards is moving to the West Coast, but her friends weren’t about to let her go without a big goodbye. Pals who gathered at the Newton home of former CN8 reporter Barry Nolan and his wife, Garland, for Edwards’s send-off included host and BU prof Trudi Feinstein, Chris Haynes, Vicki Block, Dixie Whatley, Sarah Zapp, Ann Sheehan, and Tim Estiloz.

Ben Affleck (inset) presented his “Reindeer Games’’ costar, Charlize Theron, with the “Decade of Hotness’’ award at Spike TV’s “Guy’s Choice’’ awards in California over the weekend. . . . Rapper Ludacris, in town for JAM’N 94.5’s Summer Jam, was spotted at Legal C Bar in Dedham over the weekend. Allen Iverson dined at the Legal Sea Foods at Long Wharf just before heading to Rumor to party with 6one7 Productions nightlifer Jeff London.

Globe correspondent Jason Gregory Gold contributed. Read the Names blog at www.boston.com/namesblog. Names can be reached at names@globe.com or at 617-929-8253.