Surprised by a Python 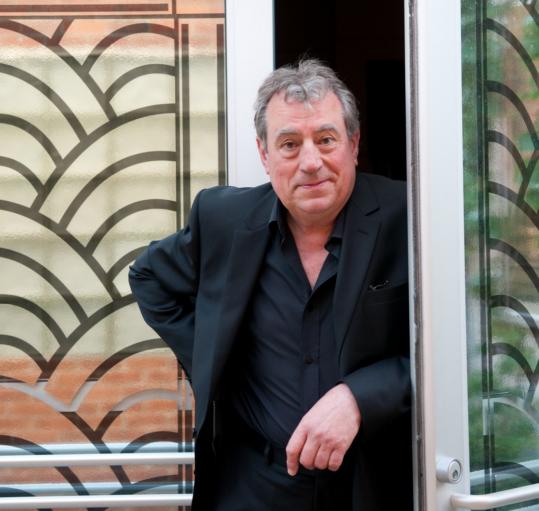 British comedy fans at the Coolidge Corner Theatre last night knew they would be catching a special screening of “Monty Python and the Holy Grail.’’ What they didn’t know was that one of the Pythons would be joining them. “I’ve never been a surprise,’’ a giddy Terry Jones told us before the screening. His appearance was a treat for the Python devotees, who got access to the event by being members of Boston’s Yelp Elite Squad, a VIP club spawned by Yelp.com. Jones’s visit was set up by the Coolidge Foundation’s Elizabeth Taylor-Mead, who produced a documentary for Jones in the early 1980s about children’s comic strip character Rupert Bear. Jones told us he was ready for last night’s Q&A session, where he assumed he would be asked whether the Monty Python troupe will ever work together again. Jones’s answer? “Not very likely,’’ he told us. “We get together for lunches and things like that.’’ Jones explained that about a decade ago, John Cleese wanted to produce a Monty Python stage show for Las Vegas, but that Michael Palin nixed the idea because he thought the cast would “look too old.’’ Jones said that, unlike Palin, he would be open to a reunion. “I think it’d be quite fun.’’ Jones arrived in Boston on Sunday and said he did make time for sight-seeing before the Coolidge event. “I walked along . . . along . . . what’s it called . . . um . . . Newbury Street,’’ he told us, adding that he also toured Boston’s “ponds and the tree-lined bits. Very nice.’’ Riley Crane, a postdoctoral fellow in the Human Dynamics Group at MIT’s Media Lab, was scheduled to introduce last night’s film.

Local angle to ‘Losing It’

Tonight’s premiere of the weight-loss reality show “Losing It With Jillian’’ will feature a local family — the Mastropietros of Wilmington. The debut of the series, which will have “The Biggest Loser’’ fitness guru Jillian Michaels visiting homes to help families shed pounds, kicks off with Michaels teaching the Mastropietros how to avoid devouring five-course meals as a way to cope with loss. Matriarch Agnus Mastropietro, who said her family has abused food since the death of her son, told us that she had some concerns about appearing on the reality show, but that she has no regrets. “I was embarrassed that the whole nation, especially family and friends, [would] know my true weight. But then I decided, who am I kidding? I am obese and everyone knows it,’’ Agnus told us by e-mail. She added that Michaels may seem like a terror when she’s making demands in the gym, but that in real life she’s sensitive and caring. “I absolutely adore her. . . . I can honestly say that she was put on this earth to help people get their lives back.’’ The show airs on NBC at 10 p.m.

Playwright and Boston University grad Craig Lucas was at BU’s Huntington Theatre over the weekend to see a staging of his play “Prelude to a Kiss.’’ Lucas, whose 1988 script was turned into a movie starring Alec Baldwin and Meg Ryan, made some time after the show to schmooze with Huntington’s “Prelude’’ director Peter DuBois and stars Cassie Beck, MacIntyre Dixon, and Brian Sgambati.

About town
Sox owner John Henry was spotted over the weekend having lobster at the Legal Sea Food at Long Wharf. . . . About 900 miles away, night-lifer Ace Gershfield mingled with celebs at the Vanity Fair party at the Indy 500. . . . Gershfield’s 6one7 Productions cohorts Salvatore Boscarino and Jeff London stayed in town to party at Quincy’s new Ocean Club at Marina Bay. Also clubbing were Kevin Faulk and Eric Alexander and Celtic Rajon Rondo.
Full house of Sox players
Sox do-gooders Jason Varitek and Tim Wakefield hosted their Texas Hold ’em Poker benefit for the Pitching in for Kids Foundation last night. The guest list for the party at Ned Devine’s included their friends David Ortiz, Jonathan Papelbon, Bill Hall, and Clay Buchholz.