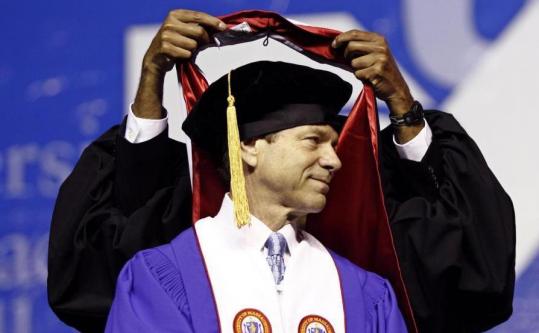 Another May weekend, another set of graduations. The University of Massachusetts Lowell celebrated commencement over the weekend by giving honorary degrees to the late former senator Charles E. Goodell, “Einstein’s Dreams’’ author Alan Lightman, educator Gloria Ladson-Billings, historian Doris Kearns Goodwin, and Goodwin’s longtime speechwriter husband, Richard, who was the assistant special counsel to John F. Kennedy. NFL Commissioner Roger S. Goodell, Charles’s son, who was the commencement speaker, got some moral support during the event from Pats CEO Robert Kraft. . . . Liz Murray, who was portrayed by “American Beauty’’ actress Thora Birch in the Lifetime movie “Homeless to Harvard: The Liz Murray Story,’’ gave the commencement speech at Middlesex Community College on Thursday. Save the Children director Mark Shriver did the honors at his alma mater, College of the Holy Cross, on Friday. Campaigning Governor Deval Patrick was the speaker over the weekend at Cape Cod Community College’s graduation, where Representative William Delahunt was given an honorary degree.

Mark and Donnie Wahlberg have teamed up with their brother Paul to open a new restaurant at the Hingham Shipyard called Alma Nove. The spot for Italian-Mediterranean cuisine is named after the Wahlbergs’ mom, Alma, with the “Nove’’ standing for Alma’s nine children. Menu items include pancetta wrapped pork tenderloin, and creamy risotto with spring peas, leeks, and shrimp. Paul Wahlberg had been the chef at Bridgeman’s in Hull. He tells us that his famous brothers haven’t been a big part of the opening process — Mark and Donnie are simply investors — but they will get perks for their involvement in the venture. “I will make their favorite dishes when they come in,’’ Paul told us yesterday, as he worked with his staff to prepare for a Friday opening. Paul says his real partner for the project is Ed St. Croix, a family friend who has had an interest in the restaurant biz. Paul said he knew he wanted to name the place after his mom when he saw the restaurant Alma de Cuba in Philadelphia. St. Croix suggested adding “Nove’’ to the name to represent her children. Paul admitted to us yesterday that he always imagined that his first restaurant would be a smaller project, something tiny in Dorchester. Surveying his new spot in Hingham, which was designed by Stephen Sousa, Paul said, “I’m just absolutely floored.’’

A pit stop in Indy

Speaking of Mark Wahlberg, just a few days after appearing in Boston to hype the IZOD IndyCar Series with legendary fast-mover Mario Andretti, the Dorchester-bred actor and the driver were in Indianapolis yesterday for the big race. Joining Wahlberg at the IZOD Vanity Fair Party before the event were Kim Kardashian and “The Hurt Locker’’ actors Brian Geraghty and Jeremy Renner.

Who needs commentators when you have celebrity tweets? Local fans were all over their mobile devices as the overtook the Magic over the weekend. “The Office’’ funny girl Mindy Kaling, who grew up in Cambridge, had a number of amusing one-liners about the weekend of basketball including, “I hope when Steve Nash retires he puts on 70 lbs and becomes a sports commentator in one of those enormous iridescent suits.’’ Not likely. Kaling added, “Lakers/Celts finals is going to tear my family apart. My brother and cousin were named after Hondo Havlicek and Jo Jo White.’’ We also liked E! commentator/Boston DJ Clinton Sparks’s Twitter question for the ages, “Why does [Rajon] Rondo not sweat?? He looks fresh the whole time.’’ Newton-bred director and “Inglourious Basterds’’ star Eli Roth tweeted, simply, “PAUL PIERCE!!!!!!’’ Arlington comedian Dane Cook, who sat courtside at the game with Medford-bred “Access Hollywood’’ reporter Maria Menounos, tweeted that he celebrated the big win with his late father. “Brought a Celtics shirt to my pops grave. He would have loved talking about last nights win. Sitting here telling him some highlights.’’ . . . In other sports news, Bedford, N.H.-bred “Saturday Night Live’’ star Seth Meyers — who’ll host the Espys in July — says he has already filmed promos for the awards show with Reggie Bush and Evan Lysacek.

Tyra Banks, who recently hung out with friends at the Woodward in the Ames hotel, was at Shrine at the over the weekend after seeing Chaka Khan, Patti LaBelle, and Yolanda Adams perform at the MGM Grand Theatre. . . . Ex-Soxer Kevin Millar was spotted chowing on turkey tips at Game On! . . . Local actress Maureen Keiller was spotted at Ryan Landry’s latest production, the Alfred Hitchcock and Provincetown-inspired “The Gulls.’’