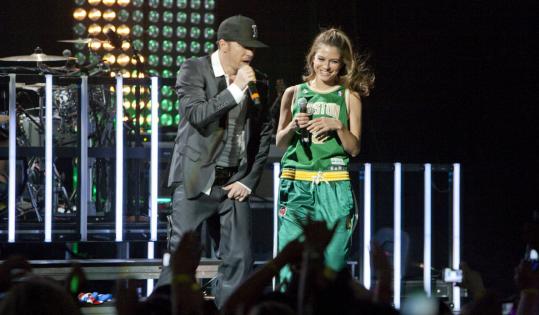 Say this about Maria Menounos, she’s not easily intimidated. Last fall, the Medford native climbed into the ring on WWE’s “Monday Night RAW’’ to tangle with a gang of glamazons. This week — just in time for sweeps — she’s back at it with “Maria’s Madcap Adventures,’’ five segments featuring our favorite “Access Hollywood’’ correspondent in unfamiliar settings: singing with Justin Bieber, dancing with New Kids on the Block, impersonating Dolly Parton in Las Vegas, calling a game, and performing on Broadway. “I wanted to get out of my comfort zone,’’ says Menounos, “and I did.’’ Perhaps most nerve-racking was the segment with NKOTB, who were her childhood heroes. “I thought I was going to marry Jonathan [Knight],’’ she told us. “In my living room, I used to nail the ‘The Right Stuff’ dance, but in concert, well, it was kind of an embarrassment.’’ (A la Sarah Palin, Menounos admits she had to write the lyrics to “Hangin’ Tough’’ on her hand.) Though she bears little resemblance to Dolly, Menounos says she managed to fool a few people thanks to a good wig, a Southern accent, and a very padded bra. “I have a newfound respect for Dolly.’’ The Emerson grad played hoops at Medford High and is a big Celts fan, tweeting frequently about their fortunes. She says the experience of calling a game was made even more memorable by Tommy Heinsohn’s unscripted, on-camera smooch. (By the way, Maria says the green team will “definitely’’ beat Orlando.) Asked if there were other gigs she would like to try, she said, “I want to perform with Bon Jovi. And I want to do a UFC fight.’’ Hmm. Maybe Menounos should do that last.

Ali, a cheerleader, autographed the shirt of one of the participants in the 13th annual Columbian Lodge Basketball Tournament to benefit The Home for Little Wanderers on Saturday. Notables at the event, held at the Reggie Lewis Track and Athletic Center in Roxbury, included Miss Massachusetts Amanda Kelly, Miss Boston Amanda Rizzo, and the Boston Cannons dance team.

Brookliners Sandy and Paul Edgerley hosted their annual house party for the Boys & Girls Clubs of Boston over the weekend. The guest list for the festivities included Robert and Myra Kraft, United Way CEO Michael Durkin, the Liberty Hotel’s Dick Friedman and his wife, Nancy, Suffolk Construction’s John Fish, and do-gooders Tom and Elena Matlack and Marion and David Mussafer.

Ben Affleck was spotted in Southie late last week doing some reshoots for his local bank robber movie, “The Town.’’ There was no sign of Affleck’s costars Blake Lively, Jon Hamm, or Jeremy Renner, but it was exciting nonetheless. “The Town,’’ which is based on local writer Chuck Hogan’s thriller “Prince of Thieves,’’ is expected to be released this fall.

Wellesley-bred actress Ari Graynor is making the most of her time at home. Technically, she’s in town to film “What’s Your Number?,’’ a new rom-com starring Anna Faris and Chris Evans in which she’ll play Faris’s sister, but the local job has given Graynor the opportunity to see family, to sightsee in her old hometown, and to help out the community. This past weekend, for instance, Graynor was at Reebok’s headquarters in Canton to participate in the Avon Walk for Breast Cancer. “I love being back in Boston,’’ Graynor told us at the walk. “It’s rediscovering a whole new city because you don’t appreciate it the same way when you’re around it growing up.’’ Said Graynor of her Sudbury-bred costar: “Chris Evans is a Boston boy too, so it’s been really fun to sort of have this whole movie world next to both of us being home.’’ Graynor, whose resume includes “Mystic River,’’ Drew Barrymore’s “Whip It,’’ and “Nick and Nora’s Infinite Playlist,’’ told us she’ll start filming “Number’’ today, and that locals can expect to see crews for the movie in the North End, Chestnut Hill, and Gloucester through June. The cast list for the film, which features Faris as a single woman seeking out old boyfriends, already has its share of big-name actors, including Zachary Quinto of “Star Trek,’’ Joel McHale of “Community,’’ and “Brothers and Sisters’’ star Dave Annable, but Graynor said Bostonians can expect at least a few more superstars to be walking the streets as well. “I’ve heard whispering of stuff; I can’t say anything yet,’’ she said. “They’re definitely looking around to get some fun people to do some good cameos.’’

Globe correspondent Terri Schwartz contributed. Read the Names blog at www.boston.com/namesblog. Names can be reached at names@globe.com or at 617-929-8253.