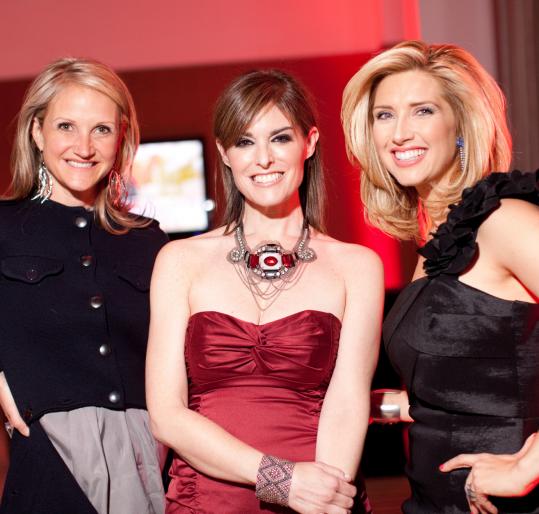 Three rooms at the W Boston were done up to look like Barcelona, New York, and Hollywood for last night’s Global Glam, a showcase of spring and summer fashions that will be sold at the hotel this season. Channel 5’s Bianca de la Garza hosted the party in the Barcelona room, while radio host Mel Robbins watched over NYC, and Boldfacers gal Lisa Pierpont presided over Hollywood. The fashion party included themed drinks in each of the rooms and models strutting around to show off the new designs. The guest list for the night included style queen Marilyn Riseman, and jewelry-making siblings Danielle and Jodie Snyder, whose accessories were shown in the W’s “Barcelona.’’ The Snyders’ designs have been sported by Katy Perry, Natalie Portman, and “Gossip Girl’’ star Blake Lively.

‘Finest’ break?
If actress Katee Sackhoff has her facts straight, we should know in a week or two whether “Boston’s Finest’’ — the cop show that was filmed around town last month — will see the light of day. Sackhoff, who’s had roles on “Battlestar Galactica’’ and “24,’’ tells Entertainment Weekly that ABC will make a call on the locally-shot pilot mid-May. “I have no idea,’’ Sackhoff said about the chances of the show getting picked up. “The one thing I do know is that we have a phenomenal cast and a fantastic script.’’ “Boston’s Finest’’ also stars Goran Visnjic of “ER’’ and Nia Long of “Are We There Yet?’’ Scenes for the crime show were filmed at spots all over the city, including the Boston Public Library and the South End Buttery. Sackhoff admitted to EW that she has a lot riding on this pilot. She turned down the role of Debbie Pelt on HBO’s hit “True Blood’’ to take the part. “True Blood’’ starts its third season in June.
Dancing on air
Cambridge Youth Dance Company students Caroline Workman, 10, and Alanna Logan, 11, auditioned for legend Debbie Allen in New York over the weekend. Allen was casting young dancers for “Twist,’’ a musical based on Charles Dickens’s “Oliver Twist’’ written by William F. Brown, who did “The Wiz.’’ Workman made it to the finals. She’ll get word on the dance job later this month.
Prejean at benefit
Sister Helen Prejean, perhaps best known for being portrayed by Susan Sarandon in “Dead Man Walking,’’ was the keynote speaker at yesterday’s annual breakfast benefit for Roca, a group that helps high-risk young people in Chelsea, Revere, and East Boston. Guests at the event included owner Larry Lucchino, Sounds of founder Kevin Sheehan, Roca member Zaida Gonzalez, and City Year CEO Michael Brown. Folks with Roca gave us the scoop yesterday that they’ve already booked next year’s breakfast speaker, who happens to be a local guy. Perhaps you’ve heard of him. His name is Matt Damon.
New Rep soiree
The New Repertory Theatre hosted its 2010 Gala at the Arsenal Center for the Arts in Watertown Monday night. Guests at the gala, which featured a look at New Rep’s next season and an after-party, included artistic director Kate Warner and playwright Lydia Diamond.
Sparks notes
Clinton Sparks, a Boston DJ-turned-recording-artist, was on Twitter yesterday thanking Playmate Heather Rene Smith for stepping in at the last minute in a music video with producer Bei Maejor. Sparks just released his own single, appropriately titled “Favorite DJ.’’
Tressed for success
Naz Kupelian Salon stylist Susan Kupelian was at Children’s Hospital earlier this week to promote John Frieda’s HAIRaising campaign, which has local salons working together to raise money for Children’s. Kupelian was joined for the event by Molly and Josh Crowley, whose daughters Emily and Sara have been chosen as faces of the campaign. Emily and Sara had their hair done at Umi Salon on Newbury Street before the visit.
Raising the bars
Spike TV is looking for local bars to participate in a new reality show about — you guessed it — bars. Boston Casting says the show will feature a bar expert helping small taverns with makeovers and improvements. The series is being produced by J.D. Roth’s 3 Ball Productions, which also does “The Biggest Loser.’’ Filming for the show would happen the week of June 8. Bar owners can get more info on Boston Casting’s website.
Special occasion
Agganis Arena hosted Special Olympics Massachusetts’s Hall of Fame Gala last night, an evening of drinks, dinner, and thanks to those who have helped the cause. Honorees included Dr. Steven Perlman, founder of Special Smiles, and Greater Media’s Peter Smyth.
‘Paperboy’ delivers in London
Boston soul sensation Eli “Paperboy’’ Reed and his band the True Loves had a performance at Scala in London on Monday night. Eli just released a colorful music video for his song “Come and Get It.’’