In praise of Parker 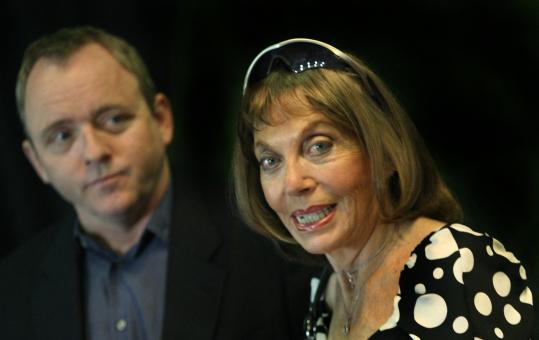 Joan Parker, wife of the late Robert B. Parker, speaks as author Dennis Lehane looks on. (Bill Brett for The Boston Globe)
By Mark Shanahan & Meredith Goldstein Globe Staff / May 11, 2010

The life and literary achievements of Robert B. Parker were celebrated last night by his friends, family, and a few of his famous admirers, including writers Dennis Lehane, Calvin Trillin, Sue Grafton, and actor Ed Harris, who directed “Appaloosa,’’ the western based on Parker’s book. (The event was hosted by the Boston University Howard Gotlieb Archival Research Center, which houses Parker’s papers.) The “Spenser’’ author, who died in January, was recalled as a workaholic who always took time out for family, food, and his friends. “I never called Robert B. Parker ‘Bob,’ ’’ said Grafton. “Not any more than I would call Mother Teresa ‘Terry.’ ’’ Trillin said Parker was “someone who knew who he was and didn’t have the slightest interest in being anyone else.’’ (A serious foodie, Trillin also appreciated Parker because he was a robust eater, and “not what [A.J.] Liebling called a ‘feeder.’ ’’) Lehane, the author of “Mystic River,’’ among other fine crime novels, called Parker a one-of-a-kind writer, saying “there’s American crime fiction before Bob Parker, and American crime fiction after Bob Parker.’’ Parker’s wife, Joan, read a poem by her husband, and his sons David and Daniel also spoke. Daniel, an actor, sang “What You’d Call a Dream,’’ and there was nary a dry eye in the crowd.

Rhyme pays
Who says poetry doesn’t pay? Watertown’s Lawrence Kessenich traveled to the Strokestown International Poetry Festival in Roscommon County, Ireland, earlier this month because one of his poems had been short-listed for the top prize and he was invited to read. “My wife and I went, partly because we had never been to Ireland,’’ he says. They not only enjoyed a pleasant, eight-day trip (one day lost to the volcanic ash cloud, natch), they returned 4,000 euros richer. A panel of three judges chose Kessenich’s 28-line long poem, “Angelus,’’ as the winner of what may be the most lucrative single-poem award in the bard biz. “This poem is a vision of innocence made real in a real context — a very difficult thing to do in poetry,’’ commented judge Sebastian Barker, a British poet. “It is beautifully organized, rich in detail, abundant in light, and it saves the best for last.’’ Kessenich, a novelist, marketing writer, and former editor at Houghton Mifflin, notes sardonically that his prize was worth $5,600 when he set foot in Ireland, and about $5,100 now, as Greece’s financial woes continue to batter the European currency. “Believe me, I am not complaining,’’ he says. “It is $5,000 I didn’t have before.’’
Basement memories
Michael Bavaro’s “Voices From the Basement,’’ a film tribute to the history of Filene’s Basement, screened for locals at the Omni Parker House rooftop ballroom last night. The documentary tells the story of the Filene family and how the store became a staple of our fair city’s retail scene. The guest of honor for the night was locally bred actress Estelle Parsons, best known for her Oscar-winning performance as Blanche Barrow in “Bonnie and Clyde.’’ Parsons was also on the original “Today’’ show and has said that most of her wardrobe was purchased at the Basement. Parsons regaled us yesterday with tales of the Boston — and Filene’s Basement — she remembers from her 20s (she’s now 82). “The escalators were wooden. They were terrifying,’’ she joked. “Voices’’ features appearances by Mike Wallace, Representative Barney Frank, and former governor Michael Dukakis.
News clippings
The man who removed Dr. Phil’s iconic mustache on “The Oprah Winfrey Show’’ last week happens to be a Bostonian. Carl Cwiok, a barber at the Art of Shaving at Gillette headquarters, shaved the ’stache live at Radio City Music Hall — under Oprah’s supervision.
Horse dollars
Bina Farm, the nonprofit therapeutic horse farm run by Bina Osteria owner Babak Bina, hosted a black-tie benefit at the Ritz over the weekend. The hairiest guest (we hope) at “Horsing Around at the Ritz’’ was Rags, one of Bina’s therapy horses, who mingled with guests during the night of dancing, auctions, and comedy. Joining Bina and Rags for the party were vice chairman David Ginsberg, do-gooders Patty and Charles Ribakoff, and comedian Joe Wong, who performed.
Art of the deal
The School of the Museum of Fine Arts has a new president, and he’s Christopher Bratton, the former president and CEO of the San Francisco Art Institute. In addition to his duties at SMFA, Bratton will be deputy director of the MFA. He starts July 1. Bratton’s job will be to attract innovative artists, both as faculty and students. The appointment was announced by Malcolm Rogers, the Ann and Graham Gund director of the MFA.
A Ruth at Remy’s
Julia Ruth Stevens, Babe Ruth’s 93-year-old daughter, had a chicken BLT at Jerry Remy’s Sports Bar & Grill yesterday. Stevens, who lives in North Conway, N.H., took time during her visit to pose with the bar’s managing partner John Mascia.
Goin’ Gaga at MassArt
MassArt’s senior fashion show, “Current 2010,’’ featured a number of bright and colorful looks fit for Lady Gaga. Designers at the weekend runway show, which took place at the Power Station in the South End, included Cholly Molthan, whose dramatic dress was worn by Ashley Murray, and Alexandra Palmisano, whose scarlet get-ups were modeled by Juliet Gleason and Jessica Klement. In the audience at the Karmaloop-sponsored event were MassArt president Kay Sloan, Reebok creative director Mike Schaeffer, and MassArt trustee Susan Schechter. Fashionistas with special tickets gathered for a pre-party at Rocca.
‘Number’ pre-party
Filming doesn’t start until Monday on “What’s Your Number?’’ but some of the cast and crew got together at a party Sunday hosted by Eric Aulenback at Alibi. The romantic comedy’s stars, Anna Faris and Chris Evans, weren’t there, but director Mark Mylod and actress Ari Graynor made the scene. The party was organized by Lance Greene and Michelle Ferrullo of North East Film Partners.
Stars at the table
Barbra Steisand and husband James Brolin stayed at the Eliot Hotel while in town this weekend for his daughter Molly’s graduation from Berklee College. Babs and Brolin dined one night at Clio with Berklee president Roger Brown and his wife, Linda Mason. . . . Celt Nate Robinson, assistant coach Arnold Hill, and scout Leo Papille were into Carla and Christine Pallotta’s North End eatery Nebo. Also in over the weekend were “Grey’s Anatomy’’ actress Ellen Pompeo and her husband, Chris Ivery. . . . Meanwhile, Hall of Famer Carlton Fisk had dinner at Stephanie’s on Newbury, and John Legend had a bite at Stephi’s on Tremont in the South End.
No room for hate
Onetime white supremacist Frank Meeink, the ex-neo-Nazi gang leader who inspired Edward Norton’s character in “American History X,’’ was in Framingham this week hyping his new memoir, “Autobiography of a Recovering Skinhead.’’ Brought to town by the Anti-Defamation League, Meeink also spoke to a group of law enforcement officials in Canton Thursday.
Stage presence
Julie Harris was at the Sunday matinee of “August: Osage County’’ at the Colonial Theatre and visited with the star, Estelle Parsons, after the show. Also in the audience at the Sunday evening show was Federico Castelluccio — a.k.a. Furio from “The Sopranos.’’
Sox on the scene
Clay Buchholz, David Ortiz, and Jonathan Papelbon were spotted at Revolution Rock bar on Saturday.

Geoff Edgers and Alex Beam of the Globe staff contributed. Read the Names blog at www.boston.com/namesblog. Names can be reached at names@globe.com or at 617-929-8253.