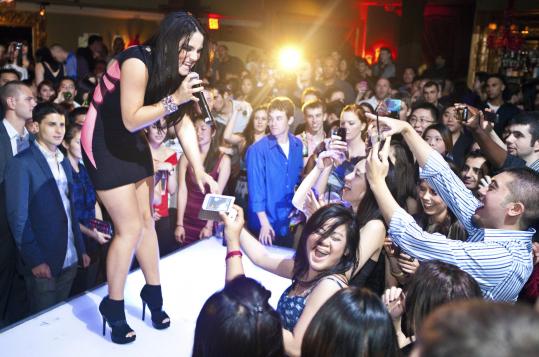 JoJo performing for fans and hanging with “American Idol’’ contestant Ashley Rodriguez (above right) at the Estate Saturday night. (Photos By Aram Boghosian for The Boston Globe)
By Mark Shanahan & Meredith Goldstein May 10, 2010

Don’t call it a comeback; she’s lived here for years. In fact, she still hangs out with her mom in Foxborough when she’s home. We’re talking about Joanna Levesque — better known as pop star JoJo — who performed for fans at the Estate on Saturday night. The 19-year-old, whose hits include “Leave (Get Out)’’ and “Too Little, Too Late,’’ sang some new material, posed for pics, and mingled with Chelsea-bred singer Ashley Rodriguez, an early castoff on this season of “American Idol.’’ As usual, JoJo made time for family during her stay on the East Coast. She tweeted to fans about celebrating Mother’s Day with Indian food and even posted photos of her uncle Dale killing bugs around the house. Nice to know Hollywood hasn’t changed her. JoJo also made an appearance at the club Shrine at Foxwoods on Friday, not far from where Jerry Seinfeld was spotted smoking a cigar after performing for a casino crowd.

Two days after Jay-Z and Beyoncé glammed up the Garden during Friday night’s - game, John Legend was spotted doing the same with his model girlfriend, Christine Teigen . Also in the crowd at yesterday’s C’s game were chef Ming Tsai, Sox limited partner David Ginsburg, developer Ron Druker, Julian Edelman and Brandon Meriweather, agent Aaron Goodwin, and “World Wide’’ William Wesley.
Brown nuptials
Roxbury’s own Bobby Brown got engaged on stage over the weekend during a concert called “Funk Fest’’ in Jacksonville, Fla. The lucky lady? Alicia Etheridge, Brown’s manager and the mother of his young son Cassius. Brown, of course, was previously married to Whitney Houston.
Food bank stocks up
Pats lineman Matt Light was in the audience the other night as the Greater Boston Food Bank opened the doors to its Yawkey Distribution Center for the agency’s annual food banquet. The event raised more than $777,000 for the GBFB. One of the auction items was a tailgate party hosted by Sports Illustrated writer and South End resident Peter King, who attended the banquet.
No joke, it’s Vilanch
The guy hanging out at Club Cafe over the weekend who looked a lot like famous comedy writer Bruce Vilanch was indeed Bruce Vilanch. The shaggy-haired joke writer and former star of “Hairspray’’ on Broadway was in town for a fund-raiser at nightclub Royale to benefit the Boston Gay Men’s Chorus. Vilanch mingled in Club Cafe’s new Napoleon Room during his stay.
ICA parties waterside
Friends of the Institute of Contemporary Art gathered by the water Friday night for the ICA’s appropriately named gala, Party on the Harbor. The guest list included ICA trustee John DesPrez and his daughter Winnie, ICA supporters Elena and Tom Matlack, curators Helen Molesworth and Randi Hopkins, Foster Prize winner Andrew Witkin, Stil boutique owner Betty Riaz, chefs Joanne Chang and Christopher Myers, and Mexican tattoo artist Dr. Lakra, whose work is at the museum.
On Fergie’s menu
Fergie — as in Sarah, Duchess of York (not the Black Eyed Pea) — dined at UpStairs on the Square over the weekend with Monitor Group founder Mark Fuller. Sarah Ferguson’s meal was sweet pea ravioli and steak frites.
Babs, Brolin at Berklee
Barbra Streisand and husband James Brolin (inset) were spotted in the crowd at Berklee College of Music’s graduation over the weekend. Brolin’s daughter Molly was one of the graduates. Streisand and Brolin were also seen touring the Isabella Stewart Gardner Museum on Saturday.