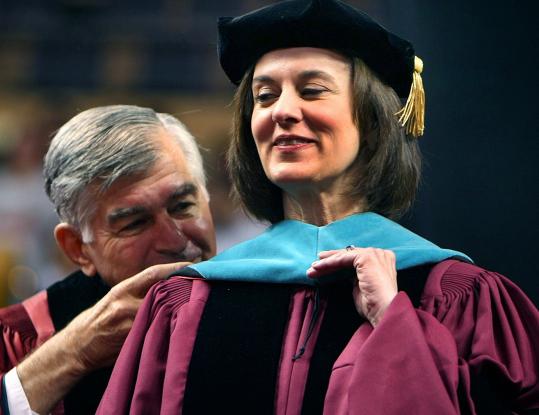 Victoria Reggie Kennedy received an honorary degree at the 108th commencement of Northeastern, which was held yesterday at the TD Garden. That’s former governor Mike Dukakis making the presentation to Kennedy.

Sluggish ticket sales
The summer concert season is fast approaching, and while tickets to some marquee shows are selling well, some aren’t. Taylor Swift, for example, had no trouble selling out Gillette. Tickets for the 20-year-old country star’s first stadium show were gone in just 20 minutes. And the Aerosmith/J. Geils Band extravaganza at Fenway? The ballpark will be banged out Aug. 14. But then there’s Bon Jovi, which is playing at Gillette July 24. Sales for the New Jersey rockers have been so weak that promoter recently added an opener — Kid Rock — and the gambit paid off, though only modestly. We’re told there are still several thousand tickets available for the show. Even sorrier are the sales for the Eagles, whose June 12 show at Gillette is being promoted, inexplicably, by Live Nation’s Toronto office. (The show’s in Foxborough, no?) To say tickets to see the ’70s act aren’t moving would be an understatement. Consider this: At presstime, Ticketmaster had seats available in the 19th row. ($220 a piece, if you’re interested.) The sluggish sales aren’t unique to Boston. The Eagles show at Nationals Park in D.C. was canceled and the band is instead playing at the smaller Hersheypark Stadium in Pennsylvania. Some speculate that fans of the band are confused by the bill, which also includes Keith Urban and the Dixie Chicks. Although Don Henley, Glenn Frey et al. are playing two hours of their greatest hits, some may consider this a country show. And, believe it or not, there are country fans who’re still upset with the Dixie Chicks for their anti-Bush remarks in the run-up to the invasion of Iraq, and some of those folks may be boycotting the show.
McCourt settlement
LA Dodgers owner and former Boston real estate developer Frank McCourt has been ordered to pay his estranged wife $637,159 a month in temporary spousal support, according to the LA Times. The amount approved by Los Angeles County Superior Court commissioner Scott Gordon is slightly less than the $988,845 that Jamie McCourt requested. Her lawyers said $568,829 of the total is needed just to pay the costs, including mortgages, of seven homes and an eighth piece of property in Mexico that are listed in her name. The commissioner ordered Jamie McCourt to sell the property in Cabo San Lucas, Mexico. According to the Times, Frank’s lawyer Sorrell Trope told the court his client is living at the Montage Hotel in Beverly Hills and has an annual income of just $5 million. He offered Jamie $150,000 a month in support and said the Dodgers franchise is not Frank’s “personal piggy bank.’’
Layoffs at the Phoenix
There are big changes afoot at the Boston Phoenix. Brad Mindich, president of Phoenix Media, announced a slew of layoffs in an e-mail to staff this week. In all, 10 people lost their jobs, including CFO and Chief Operating Officer Richard Gallagher; corporate controller Michael Notkin; assistant corporate controller Chris Crandall; and several members of the sales staff. “While I know this may be a bit of shock, this was the decision that was best for the company and will allow us to move forward faster,’’ wrote Mindich. This is the second round of layoffs at the independent weekly in recent months.
Friends gala
Guests at this week’s Friends of Silent Spring Institute Dinner honoring Marilyn Riseman, Marjorie Clapprood, and Judi Hirshfield-Bartek included a few familiar faces: honorary chairs Ted and Joan Cutler, Friends chair Ellen Calmas, Liz Walker, designers Michael De Paulo and Sam Mendoza, UMass chancellor Keith Motley, Channel 7’s Frances Rivera, philanthropist Joan Parker, model Fatima Siad, author Ben Mezrich and wife, Tonya, developer Arthur Winn and wife Alicia, Angela Menino, Tony Corey, and Mary Nobile King.
Around town
Cavaliers center Shaquille O’Neal grabbed a bite at Bricco in the North End the other night, and posed with owner Frank DePasquale. . . .Meanwhile, LeBron James was playing it cool at the Cavs’ practice yesterday at Suffolk University. King James, we’re told, sauntered into Regan Gymnasium dressed in sunglasses, a purple warm-up suit, white socks, and black flip-flops. And when his teammates gathered on one side of the floor, James sat by himself on the other side, grooving to his iPod. . . . Yankees Jorge Posada and C.C. Sabathia rang up Avila executive chef Rodney Murillo and asked that he create a dish for them using risotto, halibut, and lobster.
Star-studded game
Celebs expected at the Celts last night included hip-hopper Jay-Z and his bride Beyoncé, actress Ellen Pompeo, current and former Tully Banta-Cain, Tedy Bruschi, Julian Edelman, Stephen Gostkowski, Vince Wilfork, Ty Law, Sammy Morris, David Patten, James Sanders, Mike Wright, Bain Capital’s Paul Edgerley, LeBron James’s agents Aaron Goodwin and Leon Rose, C’s managing partner Irv Grousbeck and wife Sukey, Harrah’s chief executive Gary Loveman, hedge fund kahuna Jim Pallotta, tennis player Jill Smoller, and the Grateful Dead’s Bob Weir.
Exceptional Women
Magic 106.7 handed out its Exceptional Women awards at the Westin Copley yesterday, and this year’s crop of leading ladies included Kate White, editor-in-chief of Cosmopolitan magazine; Keziah Furth, Brookline nurse and Haiti quake survivor; Sylvia Crawley, BC women’s basketball coach; Dr. Kathy Magliato, director of women’s cardiac services at St. John’s Health Center; actress Estelle Parsons; and Rosie’s Place founder Kip Tiernan.