He doesn’t seem that scary 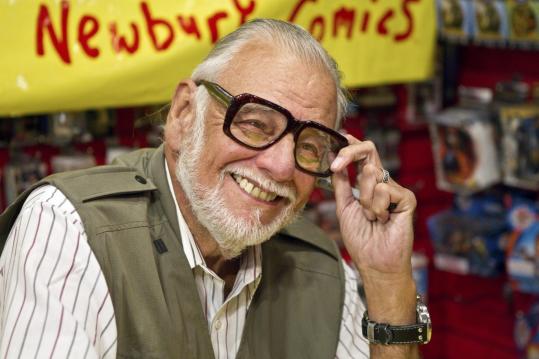 It was Zombieland at Newbury Comics in Harvard Square yesterday afternoon when legendary “Dawn of the Dead’’ director George Romero stopped by to mingle with fans. Romero was the special guest later in the evening at the Brattle Theatre, where he introduced his new zombie movie, “Survival of the Dead,’’ which takes place on Plum Island. (Not the Massachusetts Plum Island, the Delaware Plum Island.)

Visiting ‘Fairhaven’
Medford native Tom O’Brien called us with some good news about his film, “Fairhaven,’’ tentatively scheduled to start shooting locally in September. Among the rising stars who’ve signed on for the project are “Julie & Julia’’ actor Chris Messina and Rosemarie DeWitt, who was in Boston last year to film “The Company Men’’ with Ben Affleck. O’Brien says he and his director pal Jonathan Shoemaker have been busy scouting locations for the movie. “We’re going up next week to do some more scouting,’’ O’Brien told us from NYC. “People are just like so excited and jazzed up there.’’ O’Brien explained that even though he’s a Medford boy, he chose Fairhaven for the film because his mom has lived there for years. “It reminds me of Gloucester in a lot of ways. I just love the look of the town and the people.’’ “Fairhaven’’ features O’Brien as Jon, a 30-something who has a meaning-of-life epiphany after watching an interview with Tom Brady about his Super Bowl wins. (Hasn’t that happened to all of us?) Jon winds up bonding with old friends played by Messina and Brad William Henke, who “Lost’’ fans know as Bram.
O’Brien on board
Brookline native and embattled talk show host Conan O’Brien will join the board of directors of the John F. Kennedy Library Foundation. Other notables named to the board yesterday include philanthropist Adrienne Arsht, Highland Street Foundation exec Blake Jordan, and Staples CEO Ronald L. Sargent. Ken Feinberg, chairman of the board of directors, said in a statement: “Each of our newly elected board members is committed to our goal of ensuring that the legacy of President Kennedy endures and inspires future generations.’’
Musical tribute
The outgoing president of the Emmanuel Music Board, Joan Nordell, was the guest of honor at a tribute dinner at UpStairs on the Square the other night. Guests at the fete included filmmaker Errol Morris, pianist Russell Sherman and his wife, Wha Kyung Byun, and composer John Harbison. . . . Carly Simon will perform as part of the Lilith Fair at the Center on July 30. She’ll share the lineup with Cat Power, Kelly Clarkson, and Sarah McLachlan.
Magnus stays up ‘Late’
Marstons Mills-bred “American Idol’’ castoff Siobhan Magnus performed her rendition of “Paint It Black’’ on the “Late Show With David Letterman’’ on Monday. The hometown hero also bantered with Letterman about her painted stockings (which he thought were tattoos) and about her love of glassblowing. Magnus learned the trade at Morrison Glass Works on Main Street in Hyannis.
‘Sully’ speaks
“Miracle on the Hudson’’ pilot Chesley “Sully’’ Sullenberger was the keynote speaker at Greater Boston Chamber’s 101st Annual Meeting & Dinner at the Marriott Copley last night. chairman Henri Termeer, Goodwin Procter chairman and managing partner Regina Pisa, and Fletcher “Flash’’ Wiley, attorney of counsel at Bingham McCutchen and principal of PRWT Services, were inducted into the Academy of Distinguished Bostonians during the event.
Double duty
“Today’’ anchor Ann Curry will deliver two commencement speeches around town later this month. Curry will speak to grads at Providence College on May 16 and at Wheaton College on May 22.
ART takes the field
The American Repertory Theater’s annual gala was a groovy affair Monday. Held in unleased office space close to Kendall Square, the event featured a few numbers from the ART’s new show, “Johnny Baseball,’’ which opens May 16. But that wasn’t the only drama. Before dinner, the show’s composer, Robert Reale, was noshing on some of the popcorn that was at each place setting when he discovered it had been cooked in truffle oil. “He’s violently allergic to wild mushrooms,’’ his brother, Willie, the show’s lyricist, told us with a tiny grin on his face. “Keep an eye on him. This could get interesting.’’ But a few minutes later, Robert’s worry was gone. Luckily, the chef had used imitation truffle oil. . . . Yesterday, a few members of the “Johnny Baseball’’ cast, including the show’s lead, Colin Donnell, prepped by playing some catch with Harvard baseball coach Joe Walsh.
Things are go for JoJo
Foxborough-bred pop star Joanna Levesque — better known as JoJo — has been keeping good company these days. After battling her record company for years, she’s back to recording new music and has been performing with famous pals such as Timbaland and Justin Timberlake. “I kind of look at Justin Timberlake like a big brother type,’’ JoJo told us by phone yesterday. “By the time I’m his age, I want to have that knowledge.’’ JoJo — who will perform new material for fans at the Boston nightclub Estate on Saturday — was supposed to attend Northeastern University this year but deferred to work on new music. The 19-year-old doesn’t regret her choice to put off school, but promises that college is still on her agenda. “It’s so high on my list of priorities,’’ she said, joking that she might try to get college credit for her work in the music biz. “I might try to weasel my way into making it a co-op,’’ she said, laughing. Anyone who follows JoJo on Twittter knows that she does have a celebrity crush — and it isn’t Timberlake. Every few days, for one reason or another, JoJo posts a note about her love of songs by former Berklee student John Mayer. Asked what she would do if she ever got the chance to work with Mayer, JoJo told us nervously, “I just love him. I just . . . don’t know what I would do.’’
Not big on the idea
Ed Kane’s Big Night Entertainment, which runs the nightclubs Estate and Shrine at the , is happy to host JoJo but has rejected an offer from Emilio Masella (ex-boyfriend of “Jersey Shore’’ star Snooki) to make an appearance at Shrine for cash. Masella’s people said that if Big Night had booked Masella for an appearance, it would have been filmed for a reality show about Masella called “Guido Juice,’’ which is being produced by “Hills’’ reality star Spencer Pratt. Classy.