The ART of the fund-raiser 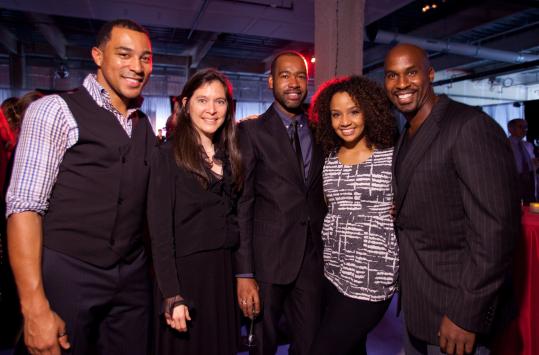 The American Repertory Theater held its annual fund-raising party last night in Cambridge. Hosted by artistic director Diane Paulus, the event included a preview of this season’s shows, and a few to-die-for auction items: a custom-designed dress by “Project Runway’’ finalist and “Best of Both Worlds’’ costume designer Emilio Sosa; VIP treatment at “The Donkey Show’’; a behind-the-scenes tour of the Harmonix headquarters and an autographed Rock Band video game; and cooking lessons from Rialto’s Jody Adams.

Sox brass call on Oracle
“A cross btw a rock concert + a county fair’’ is how Linda Pizzuti Henry described, via Twitter, the annual shareholder meeting of , which was held over the weekend in Omaha. Pizzuti Henry, her husband, Sox owner John Henry, and chairman Tom Werner were among the estimated 40,000 people who made the trip to the heartland to hear Berkshire Hathaway CEO Warren Buffett. The so-called Oracle of Omaha actually made a little news at the meeting, strongly defending against the SEC’s fraud allegations. “I haven’t seen anything in Goldman’s behavior that makes it any more subject to criticism than Wall Street generally,’’ Buffett said. We don’t know if Henry and his wife agree, but Pizzuti Henry did re-tweet this quote by Berkshire Hathaway vice chairman Charlie Munger: “There are plenty of CEOs I’d like to see gone in America. Lloyd Blankfein is not one of them.’’ The boss’s bride seemed more interested in a video — produced by NESN and shown to shareholders — in which Buffett is pitching for the and strikes out Alex Rodriguez to end the game. We bet that got more cheers than Goldman Sachs.
Wahlberg’s on course
Dorchester homeboy Mark Wahlberg, who was the subject of a flattering spread in The New York Times over the weekend, showed up on last night’s episode of Donald Trump’s new series, “Donald J. Trump’s Fabulous World of Golf.’’ The hourlong show on the Golf Channel features a slew of celebs squaring off on the links to raise money for charity. Wahlberg (inset) teed off against actor Kevin Dillon, better known as Johnny Drama on HBO’s “Entourage,’’ and, yes, Wahlberg beat his buddy and walked away with a trophy. Future episodes of the show will pit Oscar De La Hoya vs. George Lopez, and pro golfer Rocco Mediate vs. John Daly. Wahlberg, by the way, has two new movies coming out in the coming months: “The Other Guys,’’ a comedy with Will Ferrell, and the much-anticipated biopic of boxer “Irish’’ Micky Ward, “The Fighter.’’
Cole shines
Grammy winner Paula Cole wowed them at Wellspring House’s annual Women Honoring Women luncheon in Danvers yesterday. The Rockport native, who’s about to hit the road to promote her new CD, “Ithaca,’’ performed three tunes, “Women’s Hands,’’ “Happy Home,’’ and “I Don’t Want to Wait,’’ for a crowd that included Senate President Therese Murray, Anne Gifford, the wife of chairman emeritus Chad Gifford, Gloucester Representative Ann-Margaret Ferrante, and designer Sigrid Olsen.
Shakin’ it
Commonwealth Shakespeare Company held its annual shindig Saturday, and Broadway showstoppers Kerry O’Malley (“Into the Woods’’) and Anthony Rapp (“Rent’’) served as emcees. Over 150 friends and supporters filled a ballroom at the Ritz-Carlton, including city Councilor Mike Ross, lawyers Irwin Heller and Phil Gordon, Doris Yaffe, party planner Kelly Boullet, and Nokona Brands CEO Josh Fink and his wife, Anita. The 18-piece Beantown Swing Orchestra performed, as did the Andrews Sister Trio.
A charity grows
Ted Winston was at Perkins School for the Blind the other day to launch Winston Flowers’ floral philanthropic program, Charity in Bloom, with students in the Pappas Horticulture Center at Perkins School for the Blind. Joining Winston were a couple of students, as well as Betsy Demirjian, trustee of the Thomas Anthony Pappas Charitable Foundation and the Bessie Pappas Charitable Foundation, and Corinne Grousbeck, chair of the Perkins Trust and cochair of 2010 Perkins Possibilities Gala, which takes place Thursday.
Forry honored
Congrats to publisher Ed Forry, who received the 2010 Gold Medal Award from the Eire Society of Boston over the weekend. Forry, who presides over the Boston Irish Reporter, the Boston Haitian Reporter, and the weekly Dorchester Reporter and Mattapan Reporter, was feted in front of a crowd that included former Globe managing editor Tom Mulvoy, Congresswoman Niki Tsongas, WBUR GM Paul LaCamera and wife Mimi, state Senator Rob O’Leary and his brother, Carney Hospital president Dan O’Leary, state Representative and daughter-in-law of the honoree Linda Dorcena Forry, and the evening’s emcee, former Senate president William M. Bulger. Forry’s in good company. Past recipients include filmmakers John Ford and John Huston, Irish actresses Siobhan McKenna and Maureen O’Hara, Irish poet Seamus Heaney, and President Kennedy.
Casting call
Boston Casting is looking for chubby kids between the ages of 6 and 11 to appear in “Sunny Side Up,’’ a movie being directed by Martha Coolidge. (Initially, we’d heard Justine Bateman might be directing.) Written by Christy Scott Cashman, “Sunny Side Up’’ is a comedy about a woman who saves her chicken farm — and her family — by taking part in a reality TV show with a Hollywood weight loss expert. Coolidge, whose recent credits include “Material Girls’’ with Hilary and Hayley Duff, is set to start shooting here June 28.
Around town
Duff Goldman from the Food Network’s “Ace of Cakes’’ threw out the first pitch at last night’s Sox game. Goldman is in town to create a special cake celebrating the opening tonight of the Boston Pops’ 125th season. For his trouble, we’re told, he’ll briefly replace Keith Lockhart and conduct the orchestra on “The Stars and Stripes Forever.’’ . . . Jacqueline DaFonseca — a.k.a. “Doll,’’ Season 2 winner of “Real Chance of Love’’ — dined at Legal Sea Foods the other day and tweeted her satisfaction afterward: “Boston’s sooo bomb!!’’