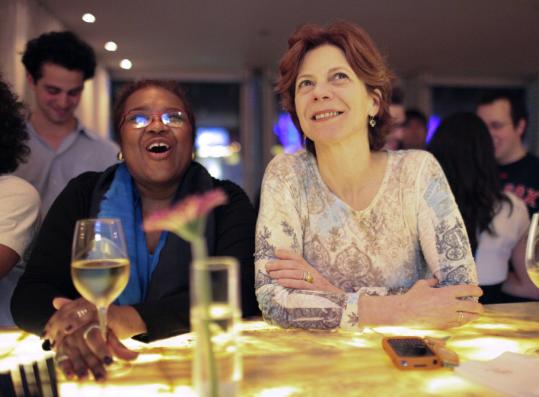 It’s a question the FBI has been asking for a while: “Where’s Whitey?’’ It’s also the title of a new book by Whitey Bulger’s onetime Winter Hill henchman Kevin Weeks and BU journalism professor Phyllis Karas. The book, which will be published in the fall by Tonto, is a fictional account of the mobster’s movements since he fled Boston in 1994. It picks up where Weeks and Karas’s previous collaboration, the best-selling “Brutal: The Untold Story of My Life Inside Whitey Bulger’s Irish Mob,’’ left off. “There were so many details that, for various reasons, we didn’t include in ‘Brutal,’ ’’ Karas told us yesterday. “This is a work of fiction, but you really don’t know if some of the incidents in this book are real or made up.’’ (It’s even been blurbed by “Goodfellas’’ gangster Henry Hill.) Asked if she could be accused of glorifying the violence done by Whitey and Weeks, Karas said people love a good one-that-got-away tale. “If it offends you, you’re probably not the reader for this.’’ The book, which was shopped to publishers by local literary agent Helen Rees, is one of two books Karas has coming out. The other is a memoir of Oscar winner Lou Gossett Jr. “I thoroughly enjoyed working with Lou,’’ said Karas. “He’s such a dear.’’

Crime writer revels in chance of Lifetime
Considering that she’s one of the world’s best-selling authors, it’s remarkable how underrepresented Patricia Cornwell is on the big or small screen. “It’s the strangest thing,’’ said the celebrated crime writer. “It just never worked out.’’ Until now, that is. Cornwell was at Brandeis last night hosting a screening of “The Front,’’ the new Lifetime movie based on her book. (The film, which stars Andie MacDowell, Daniel Sunjata, Annabeth Gish, and Diahann Carroll, premiered in New York Wednesday night and airs April 17 on Lifetime.) Cornwell, who grew up in the South but lives outside Boston now, said the movie was a treat to work on. “It might have been different if I was getting the script and saying, Oh my God, how do I fix this?’’ The film, one of two that Lifetime is airing based on Cornwell books, was produced by Brandeis alum Stan Brooks. (Last night’s event was organized by Brandeis film studies chairwoman Alice Kelikian.) A former journalist, Cornwell gave us a scoop on the future of her fearless character Dr. Kay Scarpetta. “She’s moving from New York to Boston to open a huge, high-tech forensic laboratory,’’ said Cornwell. “The book will be set right here.’’
Chefs battle on Bravo
Rialto chef Jody Adams was surrounded by her support team during the premiere of “Top Chef Masters’’ on Wednesday. As Adams watched the first round of the Bravo show, which features high-profile chefs battling one another for a grand title, she was cheered on by her special events manager Annie Sarkis, her friend Marcyliena Morgan, and fellow Cambridge chefs Mary Dumont of Harvest and Will Gilson of Garden at the Cellar. Adams actually wasn’t the focus of Wednesday night’s season premiere. The local chef featured in the episode was Oleana’s Ana Sortun, who had the challenge of preparing a dish from ingredients found at a gas station. The Bravery, a band that’s used to dining at gas stations, judged the eats. Sortun’s dish didn’t take top honors — which means she won’t move on in the competition — but she was still impressed with her own performance. “What we all did was something out of our norm and comfort zone,’’ Sortun told us yesterday, admitting she had never heard of the Bravery but is now curious to hear their music. Sortun told us she watched the show with all of her employees at the home of one of her managers. The episode that features Rialto’s Adams will run on April 28. In it, Adams and her competition have to cook for the cast and crew of the ABC television comedy “Modern Family.’’
The pen is mightier
Author Dave Eggers was scheduled to stop by his local writing center for kids, 826 Boston, last night to show off his “Storytelling & Bookmaking’’ program, which is offered to local schools. The activity allows children to write a story or screenplay, and has them working with a fictional editor named Klobberstein, who is very tough and makes students rewrite their work. (We know a few Klobbersteins.) According to the Internet Movie Database, director Jonathan Demme, who was recently honored with the Coolidge Award, has plans for turning Eggers’s Hurricane Katrina-inspired story, “Zeitoun,’ into an animated film.
‘Finest’ keeps rolling
The pilot for the cop drama “Boston’s Finest’’ continued filming in South Boston the other day. Crews with the show, which will star Goran Visnjic and Katee Sackhoff, were seen rolling lights and cameras around Executive Cleaners on L Street. Meanwhile, Boston boy Donnie Wahlberg has been in New York filming his own cop-show pilot, “Reagan’s Law.’’ Wahlberg, whose costars include Tom Selleck and Bridget Moynahan, spent his Tuesday night at the - game with his pal Anthony Anderson, star of “Law & Order.’’ Sitting nearby were Maria Shriver and her son Patrick, John McEnroe, and Ethan Hawke.
If the shoe fits
The ever-busy Gisele Bundchen presented her Ipanema Flip Flop line in Paris yesterday.
Tyson fills in for Bassett
Yes, Simmons College is still holding its annual Leadership Conference on April 30, but no, Angela Bassett will not be speaking. The Oscar nominated actress can’t make it. Organizers have signed Cicely Tyson to be the closing speaker. . . . BC hosts national security bigshots today, among them former undersecretary of state R. Nicholas Burns, Benjamin Wittes, a senior fellow at the Brookings Institute, and Philip Heymann, former US deputy attorney general. . . . Actress Ellie Kendrick, who stars in the WGBH production of “The Diary of Anne Frank,’’ stopped by Brookline’s Lincoln School yesterday.
W is for women
Members of the YWCA’s Academy of Women Achievers schmoozed at the W Boston earlier this week. Guests at the lunch included Josefina Bonilla of Color magazine, Mass General’s Elena Olson, Vicary Graham of BNY Mellon, Peggy McIntosh of Wellesley Centers for Women, and Pam Lenehan of Ridge Hill Consulting.