Top-shelf talent on the shelf 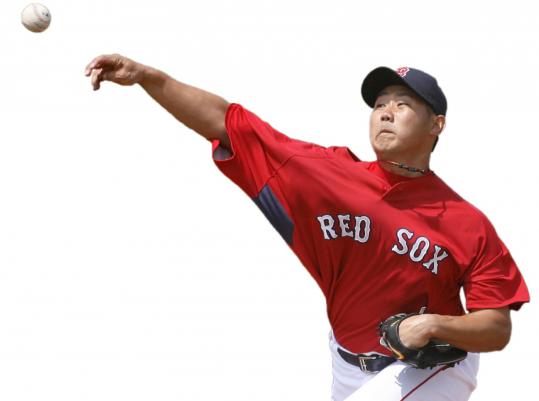 We had such high hopes for James Levine and Daisuke Matsuzaka, two high-priced pros brought to Boston to boost their respective organizations. Levine, of course, was already a world-class baton twirler and artistic director of the Metropolitan Opera when the BSO tapped him to succeed Seiji Ozawa. And Matsuzaka was a legend in Japan when the BoSox offered him a bundle of dough to bring his fancy gyro ball to Fenway. Alas, neither of them can stay healthy enough to actually do their jobs. Levine has missed much of the Symphony Hall season with a bum back and Dice-K likewise is laid up with neck and back pain, and will be pitching next for Pawtucket.

They’re with the Banned
Tomorrow is the 15th annual Banned in Boston comedy night to benefit Urban Improv, which means that Aerosmith’s Tom Hamilton has found himself something ridiculous to wear. Hamilton, who usually gets all wigged out and occasionally dresses in drag for his Banned skits, rehearsed for the show yesterday with his frequent Banned cohort, historian Doris Kearns Goodwin. As you can see, Hamilton plans to dress up as Bill Clinton, who will have some controversial ideas about how Harvard can boost its endowment. Goodwin will show up as the ghost of Isabella Stewart Gardner, who will have some choice words about the museum’s planned expansion. Other skits will poke fun at James Cameron’s “Avatar,’’ Senator Scott Brown, and the ever-popular Julia Child. Hamilton and Goodwin will be joined by Senator John Kerry, Governor Deval Patrick, and Attorney General Martha Coakley.
Together at Fenway
Steven Tyler and Peter Wolf were at the Sox game last night to announce — finally — that Aerosmith and the J. Geils Band will indeed be playing at Fenway this summer. (The pair arrived at the park in a limo after a dinner at Abe & Louie’s.) Season ticket holders will get first dibs on tickets, which will range in price from $55 to $175. (For the rest of you, tickets go on sale April 17.) The show is Aug. 14, but we’re told a second concert could be added on Aug. 13 if ticket sales are brisk. Forget all the drama of the past year, Tyler told us last night that Aerosmith is up to its old tricks. “We’re walking, talking, and taking solid foods,’’ he said. “I had a little accident when I fell off the stage at Sturgis, but I’m feeling good and I’m ready to kick some [expletive.]’’
TV appearances
Some reality television news: the Boston and Waban locations of 1800flowers.com will be featured on Sunday’s episode of “Undercover Boss,’’ the show that has CEOs anonymously working alongside their low-level employees. The local segment will feature Boston manager Sheryl Ruggiero and Waban manager Dee Prior supervising the company’s president, Chris McCann. . . . . Boston’s own “Science Bob’’ Pflugfelder will be on “Jimmy Kimmel Live!’’ tonight.
Honors and awards
Members of South End Baseball’s Boston Astros got a pre-game pep talk yesterday from Peter Gammons and Yankees pitcher CC Sabathia. The event was put on by Theo and Paul Epstein’s Foundation to Be Named Later and one of its big supporters, Gary Greenberg of the law firm Greenberg Traurig. Speaking of Paul, he and his wife, Saskia, yesterday received SCI Idealist Awards for their work with the Foundation to Be Named Later, Room to Grow, the Boston Children’s Museum, and the Children’s Advocacy Center. Susan Musinsky, the director of the Root Cause Social Innovation Forum, was also honored during festivities at the Radisson.
They've got a friend
James Taylor and Carole King had a VIP visitor stop backstage after their show in Sydney the other night. We’re told Lady Gaga was in the house and was so moved by the concert, she wanted to say hello. “Guess who went ‘Gaga’ over Carole & James in Sydney?’’ King tweeted afterward. Taylor and King’s Troubadour Reunion Tour is at the TD Garden June 19 and 20.
Tierney returns to series
Hyde Park-bred actress Maura Tierney, who had to pull out of the lead role of NBC’s “Parenthood’’ to be treated for breast cancer, will reprise her role as Denis Leary’s love interest on “Rescue Me.’’ The episodes will air next year. Tierney was recently in a run of the Wooster Group’s play “North Atlantic’’ at the REDCAT in Los Angeles.
Spotting sports
Yankees Derek Jeter and Jorge Posada were spotted lunching at Avila yesterday. Bruins guys Dennis Wideman and Tuukka Rask were spotted watching Tuesday night’s Sox-Yankees game at Game On!