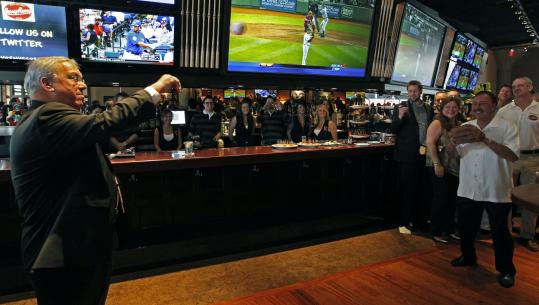 O’Malley is a good match for fund-raiser
Mike O’Malley channeled the late Gene Rayburn last night, hosting a humorous parody of the popular game show “Match Game’’ at the Sox’s annual “Welcome Home’’ dinner at the House of Blues. “I’m also channeling my own distant past,’’ said O’Malley, who hosted a couple of game shows on Nickelodeon years ago. The season-opening supper, attended by Sox players, coaches, and front-office folks, was a fund-raiser for the Foundation. (The evening’s speaker was Bryan Zimmerman, a Naval officer who served two tours in Iraq and shares his experience with post traumatic stress disorder and traumatic brain injury.) O’Malley’s been on a roll of late, appearing on “Glee’’ and “Parenthood,’’ and shooting “Eat Pray Love’’ with Julia Roberts. (His play, “Searching for Certainty,’’ will be shot in New York in June.) While in town, the actor made it a point to check out Ken Oringer’s Coppa, heading over after the opener with Kevin and Enza Youkilis, and Buffalo Tom’s Bill Janovitz, among others.

“Blossom’’ star Mayim Bialik feels strange about being called a celebrity environmentalist. It’s not that she’s not proud of devoting so much time and energy to being green, it’s just that “green’’ has become such a trendy thing these days. For Bialik, saving energy and resources has always been a way of life. “I was just sort of that kid who was really into this stuff, but nobody else was. It was more of a quirk.’’ Bialik will be at the Hynes Convention Center on Sunday to speak about holistic and green parenting as part of Down:2:Earth, a weekend convention about sustainable living. The actress has plenty to say about the topic. She’s a part of the diaper-free movement and makes many of her own baby products. “What [babies] need is usually in our arms,’’ she told us by phone the other day. We’re sure local mom and self-described green gal Gisele Bundchen would agree.

She blossomed and went green
For the record, Bialik, 34, was almost a local, years ago. She was accepted to Harvard when she was a teen, but was contractually obligated to remain on the West Coast for “Blossom.’’ By the time she was done with the ’90s sitcom, the Hub was no longer an option. “Two years later, Harvard did not honor my deferral,’’ she said, adding that she’s not bitter. “As it is, I’m pretty happy that I stayed where my parents are. I ended up meeting my husband at UCLA. A public education was really perfect for me.’’ Bialik wound up getting a PhD in neuroscience. She tells us she plans to spend her weekend checking out what she missed in Boston. She has already taught her young son all about the Boston Tea Party and plans to visit some of the historical sites with him.

Besides racking up degrees and raising eco-conscious kids, Bialik is also back on television. She has recurring roles on “The Secret Life of the American Teenager’’ and “ ’Til Death,’’ and recently signed up for a run on the comedy “The Big Bang Theory.’’ She’ll play a love interest for Jim Parsons’s geeky character Sheldon.

Some expert advice on Mailer memoir?
Norris Church Mailer’s memoir about her long marriage to famed novelist Norman Mailer is called “A Ticket to the Circus,’’ which is apt considering the legendary writer’s larger-than-life persona. But we’re told the title was actually supplied by Norris’s great friend, Cambridge-based advice columnist Margo Howard, whose mother, Ann Landers, used to say: “That’s the price of the ticket.’’ And there’s another connection between Margo and Norris. David Rambo, who’s optioned Norris’s earlier novels, also wrote the play about Margo’s mom, called “The Lady With All the Answers.’’
Hopper issue settled
Boston native Victoria Duffy Hopper, the estranged fifth wife of Dennis Hopper, can live with her daughter on the actor’s property while the couple resolve their bitter divorce case, a judge ruled yesterday. Superior Court Judge Amy Pellman also ordered the actor to pay Duffy Hopper $12,000 a month in spousal and child support. The couple, who were married at the Old South Church, are battling over money at the same time the “Easy Rider’’ star is fighting prostate cancer. He was described by his attorney yesterday as “desperately ill.’’
Baldwin at Harvard
Politically minded “30 Rock’’ star Alec Baldwin, who skipped the Golden Globes in January to hang with Robert F. Kennedy Jr., will appear at the Harvard Kennedy School’s Institute of Politics on April 28. The Institute will open a lottery for seats the week of April 19. The event will also stream live online.
Shut out
Gadfly Suffolk University undergrad Mike Giannattasio has had his pic snapped with a slew of celebs, from actors Jon Hamm and Jeremy Renner to Cameron Diaz and Tom Cruise. But Giannattasio whiffed yesterday afternoon when he wanted a pic with Yankees Derek Jeter, Jorge Posada, and Nick Swisher at the AMC Boston Common. The Bombers, who were going to the 12:30 screening of “Clash of the Titans,’’ politely declined to pose with Giannattasio . . . Before the opener, Jeter and Posada had lunch at Trattoria Il Panino in the North End.
Lights, camera, action at Big Papi’s
Cameras were rolling at Big Papi’s Grille in Framingham yesterday as Scoop Jackson interviewed restaurateur David Ortiz for the ESPN show “The Next Round.’’ The two talked about everything from the departure of Manny Ramirez to first-pitch thrower Pedro Martinez, who Papi says brought him to the Sox. Jackson also spent time in Boston over the weekend with Weymouth’s own Rob Corddry and Yankees fan Nick Turturro. In a segment that features the two actors talking about their fandom, Corddry says of Johnny Damon, “I love Damon, I just no longer love him like he’s my brother.’’ Seems fair to us. Turturro was spotted over the weekend dining at Abe & Louie’s.
All-star dining around town
Pedro Martinez must have worked up an appetite throwing out the first pitch Sunday. The former Sox ace dined afterward at Abe & Louie’s, which was one of his favorite haunts when played here. . . . Super sub Mike Lowell and his family had lunch yesterday at Legal Sea Foods at Long Wharf. All of them were wearing Sox hats. . . . David Cross and girlfriend, actress Amber Tamblyn, had drinks at Eastern Standard after the Sox opener.