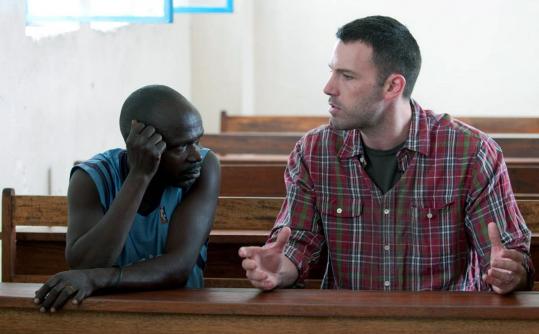 Following in the footsteps of his do-gooding pal Matt Damon, who cofounded Water.org last year, Ben Affleck announced yesterday that he has created the Eastern Congo Initiative, which will raise money for economic and social development in the eastern region of the country. As Affleck explains it in a video on the initiative’s website, the group will raise money to fund effective-yet-struggling community groups in the Congo that are already hard at work on improving the area. The ECI will also work to raise awareness about the Congo to policymakers and members of the media. The Cambridge-bred actor has long been dedicated to the Congolese people. He filmed “Gimme Shelter,’’ a short documentary about the Congo, which he played to the United Nations in 2008. Last year, he penned a piece for Time magazine in which he said, “The nation most in need of investment gets the least by the cruel logic that it is the most broken. It is a self-fulfilling prophecy that ultimately fosters indifference in the guise of wisdom.’’ Helping Affleck with the Eastern Congo Initiative is Howard Buffett, Warren’s son. The philanthropist is listed as a founding member of the group.

A Kennedy premiere
Filmmakers Shari Robertson and Michael Camerini were expected to be joined at the E Street Cinema in Washington, D.C., yesterday by Vicki Kennedy for the premiere of “The Senators’ Bargain,’’ a documentary about Ted Kennedy’s work with immigration reform. The film is a part of Robertson and Camerini’s series “How Democracy Works Now,’’ which airs tomorrow on HBO2. Vicki Kennedy was also featured on Boston native John King’s new show on CNN last night. She talked about visiting her late husband’s grave and about her family’s hope for the health care bill. She told King, “Teddy always said that, ‘When we finally pass health care reform, and when people understand what’s in the bill and what benefits there are for them, they’re going to say, What took you so long.’ And I think that’s going to happen here.’’
Pilots ready for takeoff
It’s pilot week in Boston and beyond. Yesterday, the crew of “Boston’s Finest’’ filmed scenes for its pilot at the South End Buttery. The detective show will star Katee Sackhoff of “Battlestar Galactica’’ and “24’’ fame, as well as Goran Visnjic, of “ER,’’ Nia Long, of “Third Watch,’’ and Treat Williams, who has been in just about everything. Elliot Norton Award-winning actress Kate Burton, who played Everett-native Ellen Pompeo’s mom on “Grey’s Anatomy’’ and appears in the new Robert Pattinson movie, “Remember Me,’’ isn’t listed in the Internet Movie Database as being involved with “Boston’s Finest,’’ but she was spotted at the Buttery during yesterday’s shoot. A local buying coffee overheard Burton complaining that she had lost her bag during filming. In other pilot news, “The Quinn-Tuplets,’’ a show starring Amber Tamblyn of “The Sisterhood of the Traveling Pants’’ and Anna Chlumsky of “My Girl,’’ is set to film scenes today in Lowell. Locals in Mill City shouldn’t be fazed when they see camera crews around town. Mark Wahlberg and David O. Russell filmed much of their movie “The Fighter’’ around Lowell last year.
Following Gisele
Supermodel-mom Gisele Bundchen has posted a note on her blog about World Water Day, which was yesterday. Not surprisingly, the active environmentalist supports the preservation of the natural resource. Boston’s Bundchen and her husband, Tom Brady, have been spending most of their time on West Coast. Bundchen was spotted yesterday with son Benjamin at Town in Beverly Hills.
Sarah and Bart
That was New Hampshire’s own Sarah Silverman voicing the character of Bart’s love interest Nikki (pictured) on “The Simpsons’’ the other night. Silverman cameoed in the episode with Angela Bassett, who voiced the part of Michelle Obama.
‘Secretary’ author speaks
Author Mary Gaitskill read from “Don’t Cry’’ at the Harvard Book Store last night. Gaitskill is best known for writing the short story “Secretary,’’ which became a racy film starring James Spader and Maggie Gyllenhaal. Of course, it should be mentioned that Gaitskill has suggested that the film adaptation of her work was a bit too Hollywood (she has used the adjectives “cute’’ and “sweet’’ to describe it). . . . Not far from Gaitskill, French film critic and historian Jean-Michel Frodon was scheduled to screen “None Shall Escape’’ at the Harvard Film Archive.
Remembering Zinn
Celebrations of the life of the late Howard Zinn continue. Oscar-winning local Chris Cooper will take part in “A Tribute to the Theater of Howard Zinn’’ tomorrow at the C. Walsh Theatre on Beacon Hill. Jeff Zinn, Howard’s son, will attend the event and take part in a discussion.
Wahlberg to host poker night
New Kid on the Block Donnie Wahlberg will be at the Tewksbury Country Club tonight to raise money for his brother’s charity organization, the Mark Wahlberg Youth Foundation. The night of celebrity poker, which will be hosted by Donnie (as of now, Mark Wahlberg isn’t on the guest list), will feature celebs such as former Patriot Troy Brown, Celtic Paul Pierce, Dropkick Murphys frontman Ken Casey, and actor Jamie Hector, of “The Wire’’ and Mark’s movie “Max Payne.’’
Styling Wintour
Vogue editor Anna Wintour, who was in town last night to speak at Harvard with designer Michael Kors and Russian model Natalia Vodianova about weight issues in the fashion industry, had her hair styled by Salon Mario Russo during her visit. Dani Wagener did Wintour’s makeup.

Kicking up their heels
Boston Breakers player Jennifer Nobis stopped by the World Cup Boston 2010 Soccer Jamboree at Madison Park High School over the weekend. She gave tips to local players — including Katherine Swielk — and hung out with Slyde, the mascot for the New England Revolution.