Checking out a new free agent? 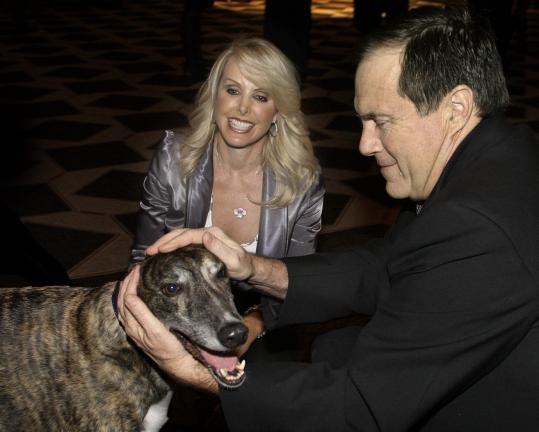 Linda Holliday and Bill Belichick at the Celebration of Greyhounds event at the Liberty Hotel. (Bill Brett for The Boston Globe)
By Mark Shanahan & Meredith Goldstein Globe Staff / March 6, 2010

NECN’s “Style Boston’’ show threw itself a party this week, and Bill Belichick made the scene, just a few hours before the NFL free agent period began. The coach’s companion, Linda Holliday, is one of the show’s cohosts, along with Eric Levin, Chris Talanian, and creator Terri Stanley. Holliday told us she became interested in fashion after participating in a few beauty contests - she was the first runner-up in the Mrs. Arkansas pageant twice - and she later owned a boutique in Florida. “This show’s got a great concept because it pulls together everything that’s going on in Boston,’’ said Holliday. Belichick smiled for our camera, but wasn’t in the mood to talk. “Nope,’’ said the coach, who traded his hoodie for a golf shirt and sport coat. “This is Linda’s night.’’ (Holliday hoped we understood: “Bill’s Bill, what can I say? To know him is to love him.’’) Others milling about the ballroom at the Evening in Celebration of Greyhounds at the Liberty included Pats linebacker coach Matt Patricia and wife Raina, Belichick’s righthand man Berj Najarian, politico John Sasso, designer Sam Mendoza, TV types Jim Braude, Chet Curtis, and Janet Wu; doyenne Marilyn Riseman; comedian Steve Sweeney, former BRA exec Harry Collings, and Hubbell Group CEO Connie Hubbell.

Carr causes stir
A column by Howie Carr’s wife in the Wellesley Townsman elicited such a nasty reaction among readers that the comments were removed from the Internet yesterday. Townsman editor Cathy Brauner told us that Kathy Carr’s complaints about underage drinking in Wellesley generated an avalanche of negativity. “I can’t think of a time when we got a response like this,’’ said Brauner. “We just took all of them down. If people want to comment, they can write us a letter.’’ (We’d print a few of the reader remarks, but this is a family newspaper.) The right-wing radio host’s wife wrote about a group of “intoxicated teenagers’’ who were littering and “screaming profanities’’ outside her home last Saturday. Carr, who’s a realtor in Wellesley, says she dialed 911 and credited cops for promptly “dispersing the rabble.’’ (She also took a photo of the beer cans on the ground.) Carr goes on to blame parents for the kids’ behavior. “I asked myself why parents don’t try to take more control of their offspring,’’ she writes. “I realize I’m starting to sound like some old fogy, but ‘these kids today’ seem quite adept at deceiving their parents.’’ Carr said her daughters asked her not to write the piece, but she felt she had to. “. . .Teenage drinking in Wellesley is everyone’s problem,’’ she wrote.
Kelly on BSO board
The BSO has a new board chairman, but Edmund “Ted’’ Kelly won’t take over until Sept. 1, 2011. Until then, the board will be headed by cochairs Stephen Kay, a senior director at , and Robert O’Block, a partner at McKinsey & Company. They succeed Ed Linde, the real estate developer who died in January. Kelly is a former math professor who’s the CEO of Liberty Mutual Group, which happens to sponsor the July Fourth Pops concert on the Esplanade.
Drumming up a sale
If the real-estate slump isn’t affecting high-priced property, why did it take Aerosmith drummer Joey Kramer 19 months to sell his gated, 17-acre compound in Marshfield Hills? The sweet spread overlooking the ocean and the North River includes a 6,200-square-foot shingled house with four bedrooms and a recording studio, a carriage house, pool, a koi pond, and three garages. (A fan of fast cars, Joey is part-owner of a Corvette dealership.) Not only was the property on the market for more than a year, it sold for $2.7 million - 27 percent less than the most recent asking price.
Magnus has Boston fan
Guitarist Tom Scholz, mastermind of the mega-selling band Boston, is not a fan of “American Idol.’’ At least, he wasn’t a fan. “The mere mention [of the show] would start me on a rant about their stupid age rules that eliminate great singers, and all the glitz and needless hoopla you have to sit through just to watch someone cover a chopped-down version of a pop song,’’ Scholz wrote Thursday on his website BandBoston.com. “But now all that has changed. Last December, I heard a young girl from Cape Cod singing Christmas songs for kids. . . . When I heard the voice, I was mesmerized by her ability to bring these simple songs to life.’’ That young girl, of course, is Siobhan Magnus, the 2008 Barnstable High grad who has wowed her way through the first several rounds of “Idol.’’ Scholz, who had one of the biggest hits ever with “More Than a Feeling,’’ is mighty impressed. “I’m very nervous today,’’ he wrote Thursday, “because tonight she sings again and I hope with all fingers crossed that things go well for her again. Ms. Magnus, you’ve done the impossible, you’ve made me an ‘American Idol’ fan.’’ (Things did go well for Magnus. She returns to the “Idol’’ stage next week.)
From the page to the screen
The whirlwind continues for Jeff Kinney, author of “Diary of a Wimpy Kid,’’ the best-selling novel-in-cartoons that hits the big screen March 19. “I didn’t think I had a prayer of even getting published,’’ Kinney told us yesterday. “This has been surreal for a long time now.’’ Kinney, who lives in Plainville, said he likes the movie and was very involved in its making, from the writing to the choice of director (Thor Freudenthal) to the casting. Yesterday, Kinney was at the Higginson-Lewis K-8 School with a couple of the movie’s child actors Zachary Gordon (center) and Robert Capron.
Around town
Former Channel 5 anchor Janet Langhart was in town this week with her husband, former secretary of defense William Cohen, to see a production of her one-act play, “Anne and Emmett,’’ at Roxbury Community College. The play imagines a conversation between Anne Frank, the Jewish girl who kept a diary during the Holocaust, and Emmett Till, the African-American boy whose murder in Mississippi galvanized the civil rights movement. . . . House Speaker Nancy Pelosi had lunch with Representatives Ed Markey and Carol Shea-Porter at Lydia Shire’s restaurant Scampo yesterday.