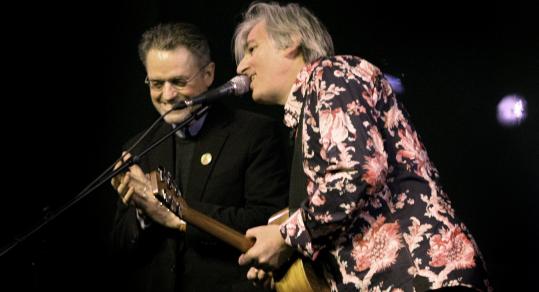 Why did Robyn Hitchcock perform at this week’s screening at the Coolidge of Jonathan Demme’s documentary about Neil Young? It’s not clear, even to Hitchcock (above right, with Demme), but what difference does it make? “To a halibut in the late 20th century, there’s no difference between me and Neil Young - or Jim Morrison, for that matter,’’ said Hitchcock. (In fact, the British singer is a buddy of Demme’s, and has been in three of his movies, including the documentary “Storefront Hitchcock.’’) The screening was part of a two-day celebration of Demme, who’s the recipient of this year’s Coolidge Award. The audience was enthusiastic about the film, but some people griped that lights inside the cinema were not turned off, which spoiled the experience.

Matthew Gilbert and Linda Matchan of the Globe staff contributed. Read the Names blog at www.boston.com/namesblog. Names can be reached at names@globe.com or at 617-929-8253.