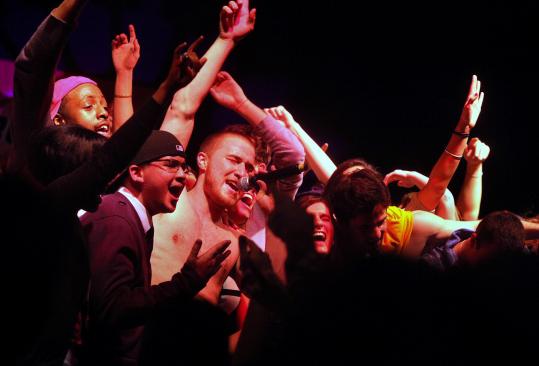 Hot singer-songwriter Mike Posner, who also happens to be a Duke University senior, performed a lively show Tuesday night at Brandeis University, which ended with students jumping up and joining him on stage. The gig brought out a number of big names, including Boston-bred E! contributor and DJ Clinton Sparks, and Kanye West protege Big Sean. Posner is managed by Milton Academy grad Dan Weisman, whose dad is Sam Weisman, producer of the recent a cappella reality competition “The Sing-Off.’’ Tuesday night’s performance included a set by All Out, a local band that features Matt McCormick, who happens to be a member of the Beelzebubs, the Tufts University a cappella group that made it to the “Sing-Off’’ finals.

John-Joel a nonstarter?
It looks like Elton John and Billy Joel won’t be performing at Fenway Park after all. While promoting his musical “Billy Elliot’’ this week, John told NBC that Joel has decided to take time off from touring, which presumably means the piano men won’t be playing, as expected, at Fenway or Chicago’s Wrigley Field. John told the network that Wrigley was one of the highlights of the duo’s tour last year. “I was so delighted to be there, and we had such a wonderful two days. I’m absolutely gutted because I’m so looking forward to coming back to play there.’’
Matt keeps going
“Green Zone’’ star Matt Damon will be extraordinarily busy over the next few years if Hollywood reports prove to be true. Last week news broke that Damon and Boston bud Ben Affleck were working on a production deal with Warner Bros. and that they might costar as wife-swapping Yankees Fritz Peterson and Mike Kekich in a movie called “The Trade.’’ This week Deadline.com - a site run by Wellesley grad Nikki Finke - reports that Damon has also signed on to play Robert F. Kennedy in an upcoming biopic based on Evan Thomas’s book “His Life.’’ According to Deadline, the movie will be directed by Gary Ross, whose credits include “Pleasantville’’ and “Seabiscuit.’’

Damon not in details
Speaking of Damon, his former personal assistant has put out a steamy new book - but don’t get excited, it’s not a tell-all. Boston’s own Trinette Faint has released “Collette’s Caleb,’’ a novel about a celebrity personal assistant who has a romantic relationship with her famous boss and his British costar. Faint told us this week that the book isn’t a thinly veiled, based-on-true-events, “Devil Wears Prada’’-style novel (meaning, it’s not about Damon and his British “Talented Mr. Ripley’’ costar Jude Law). There were no affairs when she was working for Damon. Her job wasn’t so dramatic. “I drew from experiences - not necessarily with [Damon] but in the industry as a whole,’’ she told us. Faint claims she wouldn’t even cast Damon as the lead if the book ever gets made into a movie. She has a better idea for who should play the novel’s heartthrob, Caleb. “Jared Leto,’’ Faint said. “He’s got kind of the dark hair and the green eyes, if I recall.’’ Faint, who also runs the retail site lovehue.com, added that she’d want the character who’s loosely based on herself to be played by singer Corinne Bailey Rae - “if she were to ever start acting.’’

The tanning of the Green
Who’s the fairest Celtic of all? That would be Brian Scalabrine, who received a live, in-studio spray tan at 98.5 the Sports Hub yesterday morning. Scal promised radio guys Toucher & Rich that if he received 250,000 online votes for the NBA All-Star Game, he would get the tan. The spray came courtesy of the Tan Man Sun Spa of South Boston.
Special show
Michael Franti & Spearhead treated a bunch of Mix 104.1 listeners to a private performance at the Greatest Bar yesterday. Later on, Franti opened for loose-lipped, former Berklee student John Mayer at the TD Garden. For those of you who haven’t heard of Franti, his single “Say Hey (I Love You)’’ runs during the opening credits of the movie “Valentine’s Day.’’