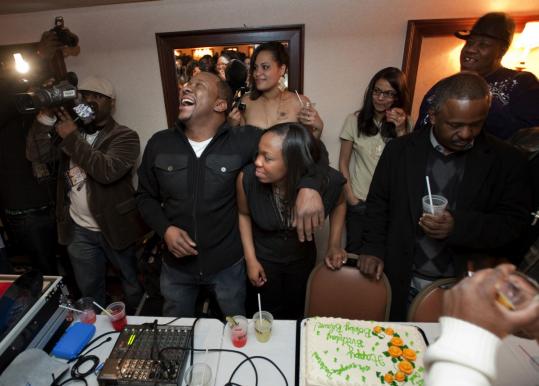 Bobby Brown with an arm around daughter LaPrincia (above) and with Teddy Glover and Desirae Jefferson (below). (Photos By Gretchen Ertl for The Boston Globe)
By Mark Shanahan & Meredith Goldstein February 8, 2010

Roxbury-bred occasional reality-star Bobby Brown celebrated his 41st birthday at XO in Stoughton on Saturday night. Joining the New Edition singer for the festivities were pal Michael Green, Brown’s brother-in-law Rick Shands, Brown’s daughter LaPrincia Brown, Brown’s son Landon Brown (who was romantically linked to Lindsay Lohan a few years ago), and a friend who goes by the name 3-EighT-Gate. XO happened to be playing the New Edition song “Candy Girl’’ as Brown entered the club.

In Boston, queen of hearts
If you’re wondering who to root for on the new season of “RuPaul’s Drag Race,’’ we recommend going local and supporting Jujubee, a makeup artist from Boston who’s one of the 12 divas vying for the reality show’s top drag-queen title. Ms. Juju is a true Boston gal with a resume that includes performances at Theater District drag haunt Jacques and a role in the American Repertory Theater’s production of “Island of Slaves.’’ Jujubee can’t tell us how she fared in the reality-show drag competition, which pits queen against queen, but she can say that the experience was a positive one. “I’m so humbled,’’ she told us after the first episode of the show’s second season aired last week. “I don’t know what this is going to bring me. It’s definitely the jump-start for everything I want.’’ Jujubee says that despite the competitive nature of the show, she made good friendships during filming. She’s especially fond of the famous folks who served as judges, including burlesque model Dita Von Teese and Kim Coles. “She’s so hilarious,’’ she said, of Coles, who used to be on “Living Single.’’ Jujubee’s Boston supporters gather every Monday night to watch the latest “Drag Race’’ episode at Club Cafe. Juju hasn’t attended the festivities yet. “I hate watching myself,’’ she admitted, laughing. Tonight’s episode of “RuPaul’s Drag Race’’ airs at 9 on Logo.

NKOB’s Knight steps up for hospital
New Kid on the Block Jordan Knight attended this weekend’s Ultimate Reunion party at the Estate, an event that raised money for St. Mary’s Women and Children’s Center in Dorchester. The benefit brought together folks who were born at St. Margaret’s Hospital, which was renamed St. Mary’s and now helps teen mothers, homeless families, and children in need. Knight was not born at St. Margaret’s, but his pal Mark Wahlberg was. Estate partners Ed and Joe Kane were also St. Margaret’s babies.
Who’s who, out and about
Celtic Rajon Rondo was spotted bowling at Kings Dedham over the weekend with his daughter and a female friend. The group snacked on pizza and chicken tenders. . . . Blue Ginger chef Ming Tsai schmoozed with NECN’s Chris Collins and night life guys Ace Gershfield and Frankie Stavrianopoulos at District. . . . Vince Carter, of the Orlando Magic, spent an evening with 6one7 Productions party host Jeff London at Venu.

Honoring ‘Hurt’ star
It’s good to be Jeremy Renner. Oscar nominated for his role as the reckless - OK, suicidal - sergeant in director Kathryn Bigelow’s “The Hurt Locker,’’ Renner was in town Saturday night to pick up the best actor award from the Boston Society of Film Critics. Sipping whiskey from a plastic cup onstage at the Brattle Theatre, Renner said he didn’t even consider skipping the ceremony. “It means a lot to me to be here,’’ he said, crediting the Boston critics for their early acclaim of the film. (“The Hurt Locker’’ last week racked up nine Academy Award nominations.) He said the film succeeds for a couple of reasons: The cast is composed mostly of unknown actors, and it’s apolitical. “No offense to Tom Cruise, but I don’t think Tom Cruise has died in any movie he’s ever done, and I’ve died in 99 percent of everything I’ve done,’’ said Renner, who may be best known for playing the lead in “Dahmer.’’ (Yes, thankfully, the serial killer does die.) “This movie makes you think and feel, but it doesn’t tell you what to think and feel.’’ A big fan of the director, Renner said he’ll “quit the business’’ if Bigelow doesn’t win on Oscar night. (We’ll see about that.) Next up for Renner is “The Town,’’ which he shot in Boston last fall with director Ben Affleck. “We robbed everything,’’ he said of the heist drama. “I don’t know if it’ll be a good film, but we had great fun.’’

Celebrity leftover
Pop star Justin Timberlake has had his name on many a marquee, but this past weekend might have been the first time the singer got top billing at a gourmet deli. Francis Cardullo, owner of Harvard Square staple Cardullo’s, says his display of the “SexyBack’’ singer’s name brought in some curious customers. “We had some people asking, What’s up? What is it?’’ Timberlake was in town Friday and Saturday to accept the Hasty Pudding Man of the Year honor at Harvard University. For the record, Timberlake told reporters just before leaving the Crimson campus that he’d be rooting for the Colts during last night’s big game.
‘Sweet’ appearance
MTV princess Lauren Conrad was at the Barnes & Noble at the Prudential Center on Friday night to sign copies of her book “Sweet Little Lies,’’ a follow-up to her first novel, “L.A. Candy.’’ B&N staffers tell us that hundreds of fans (mostly young women) showed up to get a glimpse of the former star of “The Hills.’’
Super time in Miami
One of the many football fans down in Miami last night was Union Oyster House owner Joe Milano, who hit the game dressed to root for the Saints. Other notable Bostonians at the Super Bowl were chef Todd English, Giant Glass owner Dennis Drinkwater, and Longwood Events boss Jim Apteker.