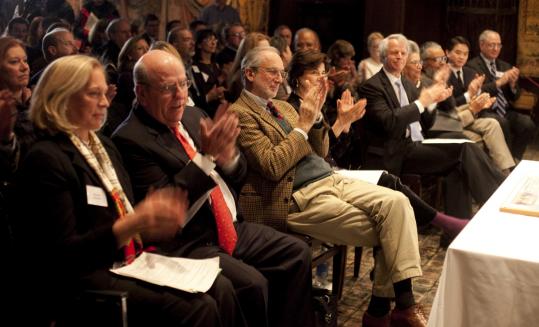 Architect Renzo Piano (center) applauds at a presentation of his final design for the Gardner Museum extension. (Erik Jacobs for The Boston Globe)
By Mark Shanahan & Meredith Goldstein January 22, 2010

Architect Renzo Piano and Mayor Tom Menino were among the guests at yesterday’s unveiling of the Isabella Stewart Gardner Museum’s plans for expansion. The new $118 million wing will include a music hall, gallery space, and a new entrance.

Huff will keep her job
Senator-elect Scott Brown’s wife, Gail Huff, issued a statement yesterday saying she isn’t ditching her job at WCVB-TV, where she’s worked for 16 years as a general assignment reporter. Huff didn’t campaign with her husband, and only appeared with him publicly on election night. “I’ve been an impartial and unbiased journalist for 26 years,’’ Huff said. “I will continue to keep my professional life completely separate from my personal life as Scott Brown’s wife.’’ Her bosses said Huff’s assignments won’t present conflicts of interest.
Youk on screen
He plays first base, he plays third base, and he also acts. All-purpose All-Star Kevin Youkilis is on his way to New York to shoot a scene for the indie film “Goat.’’ We’re told Youk’s former teammate Bronson Arroyo also has a cameo in the film, which stars Armand Assante, Ice-T and “Sopranos’’ alums William DeMeo and Vincent “Big Pussy’’ Pastore. The film’s being directed by Paul Borghese and produced by Irena Angeliades, a big baseball fan who helped cast Youk, Arroyo, and Eduardo Pérez.
‘M*A*S*H’ crew in Hub
“M*A*S*H’’ actors Sally Kellerman and Michael Murphy, and director Robert Altman’s widow, Kathryn, had dinner last night at Eastern Standard. The gang will be joined by Elliott Gould for a few days to mark the 40th anniversary of “M*A*S*H’’ and to screen some of Altman’s other films at the Brattle Theatre. The fun starts today at BU’s Tsai Performance Center at 5:30.
Storm at Channel 7
WHDH Channel 7 meteorologist Dylan Dreyer was quick to defend her colleague Pete Bouchard on 101.7 WZLX’s morning show “Karlson & McKenzie.’’ Bouchard has become something of a national punch line because of a recent on-air segment during which he referred to the region’s heavy snowfall as “almost as big as me.’’ Dreyer explained that despite the many blogs that have suggested otherwise, Bouchard wasn’t referring to any part of his anatomy. Apparently, WHDH had set the studio for weather guy Jeremy Reiner, who is shorter than Bouchard. When Bouchard stepped up to the weather map, he thought he looked too big on the screen. Dreyer explained the “almost as big as me’’ joke was a hint to producers to change the specs. “Poor Pete, he is just so clueless,’’ Dreyer said lovingly, of Bouchard, on “Karlson.’’ Dreyer admitted that she has enjoyed viewing the controversial clip. She told the radio guys that she’s watched it “about 15 times.’’ It’s not easy to find the Bouchard clip online now. Most of the clips, including one on the Huffington Post, were taken down yesterday and replaced with a note that said: “This video is no longer available due to a copyright claim by WHDH-TV.’’ Chris Wayland, spokesman for WHDH, said he wishes the media would stop making a big deal of the comment. Bouchard was simply concerned about what he saw in his own monitor. “He thought everyone could see that he looked 9 inches tall,’’ Wayland said of the technical difficulty. “We think the way it’s being portrayed in the public is totally ridiculous.’’
PJ Library comes to NY
There once was a man from Nantucket . . . and he and his wife were in Manhattan this week. Comedians Jerry Stiller and Anne Meara (above) read books from the PJ Library collection to kids at the Jewish Community Center. The event celebrated the arrival in New York of the PJ Library, which was founded by Harold Grinspoon, a real estate developer and Jewish philanthropist in West Springfield. It sends 58,000 free Jewish books to families each month as a way to educate and engage them in Jewish traditions.
Filmmaker’s producing change
Annalise Littman, an 18-year-old freshman at Tufts University, will screen her documentary “Aquafinito’’ as part of the Human Rights Watch International Film Festival tonight at the Museum of Fine Arts. The Newton South High School grad’s film is about the world’s access to clean water. Littman is the only Massachusetts-bred student on the list of the festival’s “Youth Producing Change’’ filmmakers.
Boston ranks seventh
Boston has been hyped because of its tax incentives for filmmakers, but according to MovieMaker Magazine, the Hub is only the seventh best place to make an indie film. The magazine just released its top 10 cities for independent moviemakers, and first place went to Albuquerque, second to Los Angeles, and third to Shreveport, La. Boston came in after New York, Austin, and (drum roll) Stamford, Conn. The magazine said criteria for the list included housing costs, crime rates, access to talent, and ease of shooting.

A look at Snook

Nicole “Snooki’’ Polizzi, of the popular MTV reality show “Jersey Shore,’’ makes an appearance at the nightclub Shrine at the at Foxwoods tonight. She called us yesterday to hype the gig. Not surprisingly, she was happy to promote herself.

A. [Sighs] Leonardo DiCaprio. He is so much hotter in person. We actually went to a club with him and Kevin Connolly. We pretty much just had a couple drinks and had fun.

Q. A few magazines have tried to give the “Jersey Shore’’ cast a makeover. Is that insulting? Do you actually like wearing any of these more conservative outfits?

A. All of the makeovers we’ve pretty much had, I’ve hated. I don’t like to be someone I’m not. I wouldn’t wear any of the clothes they gave me.

Q. Ever been to Boston?

Q. Lauren Conrad eventually bailed from MTV’s “The Hills’’ because she got sick of the cameras and was ready to move on. How long do you think you’ll want to take part in “Jersey Shore’’?

A. I could do it forever. For “The Hills,’’ it took them a while to get popular. We’ve only been on for, like, four weeks. That says a lot. This is my life now.

Q. Where do you think Snooki will be in, let’s say, 10 years from now?

A. I kind of want to make a clothing line for, like, hoodies and stuff.

Q. You’ve done a few of these nightclub gigs. What are they like? How do the fans treat you?

A. They’re all nice. They get a little crazy. Pushin’ each other and shovin’. It’s awesome.

Q. There was plenty of controversy surrounding footage of you getting punched at a bar - footage that MTV decided not to air because it glorified violence. Now that you’ve had some distance from it all, what are your thoughts on that experience? You’ve said you were happy it didn’t air.

A. Nothing’s changed about it. I still feel the same way about it and I’ll never change my mind.

Q. There’s a lot of criticism that the show portrays the Jersey Shore in a less than flattering light. What do you tell your critics?

A. I say, I’m not forcing you to watch it, so change the channel. We’re not forcing anyone to watch. But at the end of the day, all the haters are going to be watching.

Q. Will you do any gambling at Foxwoods tonight?

A. I never gamble. I don’t feel like losing money.