Cheers to the end of 'Finnegans Wake' 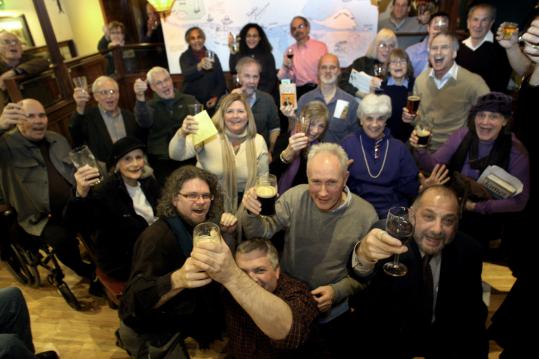 It’s taken awhile - 13 years to be exact - but the “Finnegans Wake’’ Reading Group has finally finished James Joyce’s famously long and difficult novel. Formed by serious fans of the Irish writer, the group has been meeting weekly to read a page or so of the convoluted work of comic fiction. The uncommon exercise, which began at the Thirsty Scholar in Cambridge, concluded this week at the Corrib in Brighton. Published in 1939, “Finnegans Wake’’ begins with the last half of a sentence and ends with the first half of the same sentence. To mark the end of the marathon reading, the group’s members raised their glasses and ritually chanted the entire completed sentence.

Boston socialites gathered at the socialite-friendly W Boston last night to celebrate “The Overnight Socialite,’’ Harvard grad Bridie Clark’s book about love, red carpets, and New York scenesters. Hosts of the party were Alexis Maybank and Alexandra Wilkis Wilson, who run Gilt Groupe, a members-only high-end shopping site. Boston gals on the guest list included Tonya Chen Mezrich, Boldfacers boss Lisa Pierpont, and Stuff editor Erica Corsano.
Stars urge Haiti help
Singer Wyclef Jean is taking a break from his studies at Berklee College of Music to help people in his native Haiti. Jean, who’s been taking courses at Berklee since last fall, flew to Haiti immediately after a catastrophic earthquake rocked the country Tuesday. Jean, one of Haiti’s most famous sons, took to Twitter to galvanize support for quake victims. “Your money will help with relief efforts,’’ the former Fugee wrote. “They need our help - please help if you can.’’ Jean (inset) recommended people send a text to his Haitian charity, Yele, to donate $5 to the Yele Haiti Earthquake Fund. (The number is 501501.) Jean is just one of several celebs urging support for survivors. Oprah Winfrey, Paris Hilton, Ben Stiller, Lindsay Lohan, Adam Lambert, and Ryan Leslie all tweeted their concern. On her website, Shakira called for donations to Yele and UNICEF. Lee Daniels, director of the film “Precious,’’ said the earthquake makes Sunday’s Golden Globes ceremony seem “so unimportant.’’ , which owns MTV Networks and Paramount Pictures, announced yesterday it is setting up a $500,000 matching gift program, with donations going to the Red Cross. Jean has a history of lending a hand in Haiti. In 2008, after Hurricane Ike swamped the island, he recruited Matt Damon to help deliver food and supplies. “It’s a lot easier to get on the news if you’re promoting ‘Bourne’ than if you’re talking about people dying 600 miles away for no reason,’’ the actor said at the time. “Wyclef represents hope for a lot of people there. There were people literally clinging to the UN truck, holding on, saying, ‘Let me just stay close to you a little longer.’ ’’
A fitting tribute
Cellist Yo-Yo Ma paid tribute Tuesday to the late Ed Linde, the Boston real estate developer who was chairman of the BSO board. (Linde, cofounder of , died Sunday.) The cellist played the Sarabande from Bach’s Suite No. 6 as an encore, dedicating it to Linde. Later, he sat in the back of the cello section and joined the BSO on Schubert’s Symphony No. 8 in B minor.
The brothers Giovanis
“There’s Something About Mary’’ directors Peter and Bobby Farrelly aren’t the only sibling moviemakers in the Ocean State. Director-producers Evangelos and George Giovanis hosted a party in Warwick, R.I., the other night to raise money to make “Bereavement,’’ their upcoming drama that will star Olympia Dukakis, Dukakis’s husband Louis Zorich, Sam Coppola, and local actor Armen Garo, who had a small role in “The Departed.’’ Dukakis was the guest of honor at the fund-raiser, which featured mingle time with the Massachusetts-bred actress, a flamenco dance performance, a screening of snippets of the Giovanis brothers’ last film, “Run It,’’ and enough food and drinks to butter up the guests for donations. “It served its purpose,’’ Evangelos told us, of the party, which also benefited a University of Rhode Island film scholarship. “Next week I have a meeting with like 20 possible investors.’’ He told us that “Bereavement,’’ which the brothers hope to start shooting in May or November, will be about a fatally ill man whose wife goes missing. Evangelos told us of the family directing style, “We don’t blow up cars. We try to blow up hearts.’’ Good line, right?
He’s the ‘Idol’ chatterer
Remember the guy who copped the ’tude with Kara DioGuardi on “American Idol’’ the other night? Turns out he’s a talented, young Boston musician who occasionally plays trombone with popular soul band Eli “Paperboy’’ Reed and the True Loves. Andrew Fenlon, the sometime horn player for the group, was the local contestant on Tuesday night’s “Idol’’ who walked into the State Room with hipster glasses and a scowl on his face and gave the judges so much lip that DioGuardi told him he deserved a spanking. Of course, it was meanie Simon Cowell who warmed up to Fenlon, telling the local horn player, “We started off bad but we kind of got to like each other.’’ Fenlon auditioned with a solid version of “House of the Rising Sun.’’ DioGuardi, celeb judge Victoria “Posh’’ Beckham, and Randy Jackson told him his singing wasn’t good enough to balance his attitude problem. . . . In other “Paperboy’’ news, Eli recently met up with Daryl Hall of Hall & Oates to film an episode of “Live From Daryl’s House,’’ an online music series shot at Hall’s abode. The new episode features Eli and Daryl duetting on Hall & Oates’ “It’s Uncanny.’’
Double dose of Starr power
Starr talent is a family affair. Stephen and Maurice Starr Jr. played with their band Musik Makerz at Johnny D’s the other night. The duo says their act is inspired by Donny Hathaway and Stevie Wonder. As you probably know, the Starrs’s dad, Maurice, is responsible for the success of Boston boy bands New Edition and New Kids on the Block.

Boston Rob is back in the game

Rob Mariano is thinking that the third time will be the charm. On Feb. 11, the man known as “Boston Rob’’ will participate in his third iteration of the reality show “Survivor,’’ what’s been dramatically dubbed “Heroes vs. Villains.’’ “Can you believe they put me on the villain side?,’’ Mariano asked at a party in LA that celebrated the competition series’ 10th anniversary. Mariano (inset) told the Globe that his wife, Amber, who was also a “Survivor’’ contestant, would be skipping the festivities because she’s in Florida taking care of their 6-month-old, Lucia Rose. Apparently it was Amber who pushed Rob to join “Heroes vs. Villains.’’ “She said, ‘Look around: Every thing we have, the reason we met, has all been because of the show.’ [“Survivor’’ creator] Mark Burnett has been a friend for almost a decade now, so when he asked me to come back for a third time it was an honor.’’

Sarah Rodman of the Globe staff contributed to this report. Read the Names blog at www.boston.com/namesblog. Names can be reached at names@globe.com or at 617-929-8253.