Even with a sprained ankle, he’s dancing on air 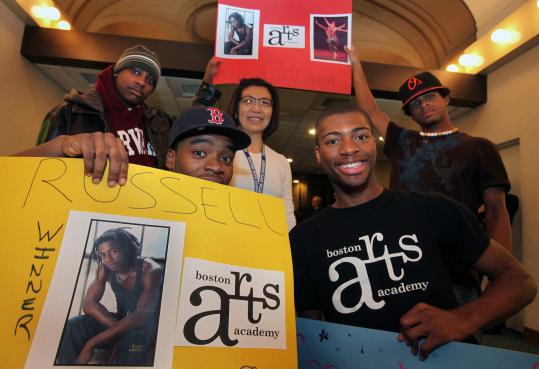 Despite injuring his ankle during Wednesday’s finale of “So You Think You Can Dance,’’ Russell Ferguson is feeling no pain. “I’m good,’’ he said a few hours after winning the Fox reality show and limping away with $250,000. “It’s a little sprained. I’ll just need to stay off it for a while.’’

“Russell’s got a serious shot to have a decent career now,’’ said Hill, who has refrained from calling Ferguson. “It must be madness for him right now.’’

Because Ferguson didn’t know what to expect going into the competition, he had modest expectations. “I have a strong faith and I just made sure I kept my head up and didn’t think about the end,’’ he said. “There were definitely things thrown at me that I wasn’t prepared for - the ballroom, the jive, a lot of the contemporary moves - but I just kept working.’’

Ferguson’s proud parents were in LA for the finale, and were stunned when their son was declared the sixth-season winner of “SYTYCD.’’ “My mom was, like, speechless,’’ he said, laughing. “She cried, but she breaks down all the time.’’

So what’s next? Ferguson said he’d like to be “more and more famous,’’ and maybe attempt an acting career. But in the meantime, he’s determined to stay focused. “I’m definitely driven by God and inspired by my parents,’’ he said.

And the money? What has he got planned for his newfound wealth? “Obviously, Christmas is going to be lovely,’’ said Ferguson, who’ll be back in Boston for the holidays. “But most of it’s going to hit the bank. I’m just going to take my time, invest it, and make sure it keeps growing.’’

As of yesterday afternoon, the city’s registry of births had not received paperwork - or news of a name - for the son of Tom Brady and Gisele Bundchen, who was born last week. And according to the clerk’s office, it’s not that unusual. A woman who answered the phone at the registry explained to us that often, hospitals pass over paperwork for babies without first names included. Eventually, when the family needs to get a passport or other paperwork, the name is filled in. That said, the baby name should be declared sooner than later, according to Jennifer Manley, of the Massachusetts Department of Health. Manley told us that Bay State babies are supposed to be named within 10 days so that the local clerk’s office can pass the information to the state registry for its records as quickly as possible. But Manley admitted that the rule is rarely enforced. Usually, people are pretty quick to name their kids, she joked. Of the Brady-Bundchen baby, Manley said, “We do not have a birth certificate filed for this case as yet.’’

The Bubs on a roll

The Tufts University a cappella group the Beelzebubs have made it to the finals on the NBC reality show “The Sing-Off,’’ which means the ensemble needs your help. You can vote for the Bubs to win the reality competition - and hear them perform - by visiting www.nbc.com/sing-off. The Bubs, who delivered a memorable performance of Flo Rida’s “Right Round’’ to make it to the top three, are up against Nota, a sextet from Puerto Rico, and Voices of Lee, from Tennessee. All three groups will perform live on Monday at 8 p.m. “Sing-Off’’ is produced by local movie-and-television guy Sam Weisman, who told us yesterday he’s thrilled with the reception the show’s getting. “It’s doing very well ratings-wise,’’ he told us. “It showed the biggest improvement from the first night to the second night of any show this year, and [judge] Ben Folds was the No. 1 search on the morning after the premiere.’’

Local “Survivor’’ champion Ethan Zohn, who has been chronicling his battle with Hodgkin’s lymphoma for People, has told the magazine that he’s in remission. People.com posted video yesterday of the Lexington-bred reality star phoning his mother to tell her the good news.

Wearing a Santa hat and a smile, actress Emmy Rossum stopped by Children’s Hospital Boston yesterday to sing a few holiday numbers for the young patients. Accompanied by conductor Keith Lockhart and a couple of the Pops, Rossum performed a merry medley, including “Sleigh Ride,’’ “White Christmas,’’ and “Frosty the Snowman.’’ (At one point, Keith asked the kids what their favorite holiday song was, and one squirt said: “Dominick the Italian Christmas Donkey.’’ Alas, the Pops hadn’t prepped for that.) “Any time I can do something like this, especially at this time of year, it’s wonderful,’’ said Rossum, who told us she began singing seriously in the second grade. Though best known as an actress - she was Sean Penn’s daughter in “Mystic River’’ - Rossum has impressive pipes: She was nominated for a Golden Globe for her role in the screen version of Andrew Lloyd Webber’s “The Phantom of the Opera’’ and released a CD of her own in 2007. “Music’s always been part of my life. The first time I really felt like myself was when I was singing,’’ she told us yesterday. We wanted to know if she’s getting any helpful hints from her boyfriend, Counting Crows frontman Adam Duritz, but she declined to dish. “I don’t talk about that stuff,’’ she said.

Curt Schilling and comedians Steve Sweeney and Lenny Clarke were guests at gubernatorial candidate Charlie Baker’s holiday party at the Estate the other night. The Estate is also hosting the New Kids on the Block after-party on Sunday. Donnie Wahlberg, Jordan Knight, and company have asked fans to meet them at the nightclub as soon as their Toys for Tots benefit at House of Blues is finished.

Bruins greats Bobby Orr and Derek Sanderson visited with patients at the Jimmy Fund Clinic yesterday. They were joined by Richard Cawley, CEO of Rectrix Aviation, who donated $5,000 to the cause. It was no coincidence that the Bruins alums joined forces with Cawley; they are spokesmen for Rectrix, which flies private jets.

Celtics star Paul Pierce stopped by the Blue Hill Boys & Girls Club in Dorchester yesterday to participate in Coca-Cola’s Triple Play Program, which aims to help children maintain a balanced diet (as in, not too much Coke). Pierce has been a big advocate of youngsters eating right; he has his own program called FitClub34.

Trio lights up the Pops Christmas

An ageless Debby Boone was at Symphony Hall Wednesday night to perform as part of “A Company Christmas at Pops,’’ an annual Boston Symphony Orchestra fund-raiser. Joining the “You Light Up My Life’’ singer was “Frost/Nixon’’ actor Frank Langella, who narrated “A Visit From St. Nicholas.’’ Pictured backstage with the two stars is Pops king Keith Lockhart.