There's something about Boston 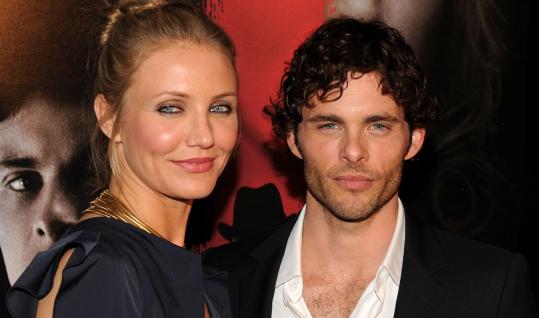 Cameron Diaz, who’s been in Boston shooting “Knight & Day’’ with Tom Cruise, made it to New York on Wednesday for the premiere of her thriller “The Box,’’ which was filmed around Milton last year. During her Big Apple tour to promote the film, Diaz stopped by “Late Night With Jimmy Fallon,’’ where she dished about what it’s been like to spend so much time in the Hub. “It’s been, really, so much fun. I love Boston. It’s fantastic,’’ she said. Diaz told Fallon that she has spent much of her time in the South End (she and Cruise recently filmed scenes at the Harrison Avenue restaurant Gaslight), and that she was on Beacon Hill for Halloween. “If you’ve never been to Boston for Halloween, it’s an event. You can get a load of candy.’’ Diaz also said that she recently befriended some young people who hang out on Boston Common smoking out of a hookah. “That’s the kind of thing that happens in Boston,’’ Diaz said giggling. (For the record, Diaz says her new friends smoke legal tobacco.) Both Fallon and Diaz said that being in Boston makes them feel smarter. “There’s so much brainpower, like, surging there,’’ Diaz said. We would agree. “The Box,’’ which opens today, costars James Marsden.

Krasinski to chat on Boston.com
Newton native John Krasinski, who’s in town to show off his directorial debut “Brief Interviews With Hideous Men,’’ has decided to stop by the Globe today to chat with fans on Boston.com. He’ll be sitting at a Globe desk (lucky us, right?) ready to answer your questions at noon. Krasinski appears at the Kendall Square Cinema tonight and at Brookline Booksmith tomorrow.

Blues and folk radio programs may be dropped
Blues fans may get the blues when they hear WGBH’s plans for programming changes. ’GBH spokeswoman Jeanne Hopkins confirmed to us yesterday that if the FCC approves the station’s purchase of WCRB-FM, a classical station based in Waltham, the station will cancel “Folk on WGBH’’ and “Blues on WGBH,’’ which air on Saturday afternoon and Saturday night, respectively. The blues show is hosted by Brendan Hogan, while folk is hosted by Naomi Arenberg and Brad Paul. Hopkins explained that WGBH wants to carry classical music on one station (WCRB’s 99.5) and news and information on the other (WGBH’s 89.7). She said that blues and folk fans have other ways to find their genres of choice in Boston, and that ’GBH wants to keep its programming unique. “We’ve carried both of these for many years and we’ve been proud do it. We’re very proud of the contributions,’’ she said. Hopkins said there will be no programming changes until the deal goes through.

Patching together a look
Just call him the prince of patchwork. That mad man in madras is Mike Danziger, president of the Steppingstone Foundation, a local nonprofit that helps urban school kids get to college. Guests at the annual Steppingstone gala - which was held Wednesday night at the Charles Hotel and raised almost $500,000 for the cause - included former Bruin Gord Kluzak, who dressed more traditionally for the festivities.

Express purpose
Members of the Beverly organization Express Yourself - which helps underserved youth in Department of Mental Health residential programs participate in the arts - were at the White House Wednesday for the Coming Up Taller Awards, which celebrate groups that get young people involved creatively in their communities. Accepting the award in Washington, D.C., from first lady Michelle Obama were Express Yourself co-director Paula Conrad and Tracy Powers, who used to be an Express Yourself kid and now works for the program. The night before the awards ceremony, Express Yourself co-director Dan Strickland and local African drummer Joh Camara performed with Express Yourself Drumming at the Kennedy Center for a VIP crowd that included Kal Penn, Alfre Woodard, and Edward Norton.
Unexpected guests
The Boston Jewish Film Festival is welcoming a few special guests this weekend - some of whom weren’t originally expected to attend screenings in person. Sallie Aprahamian will be at the Institute of Contemporary Art tomorrow at 7 p.m. to introduce and answer questions about her romantic drama “Broken Lines,’’ which stars Paul Bettany. She’ll also be at the Coolidge Corner Theatre screening the film at 7:45 p.m. on Sunday. Tomorrow at 9:15 p.m., director Jean-Jacques Zilbermann and actor Mehdi Dehbi will be at the Museum of Fine Arts to talk about their film “He Is My Girl,’’ a comedy about a gay Jewish musician who falls for a cross-dressing Arab cabaret waitress. (Complicated, right?) And on Sunday at 5:30 p.m. at the Coolidge, Boston Breakers captain Kristine Lilly will greet fans at a screening of “Sons of Sakhnin United,’’ a documentary about an Arab-Jewish Israeli soccer team.
Making the list
’Tis the season for year-end best-of lists, and the pageant of critics’ picks kicked off with a bang for a pair of local musicians. Number 13 on Amazon.com’s list of the top 100 albums for 2009, published yesterday, is “Manners,’’ the debut from Boston rock band Passion Pit. In the number 17 slot: “Song Up in Her Head,’’ the maiden collection from New England Conservatory freshman Sarah Jarosz, who is blown away to be included on a list that spans the genres from Jay-Z to the Yeah Yeah Yeahs. “I can’t even believe it,’’ says the 18-year-old mandolinist and singer-songwriter. “It’s just so encouraging.’’ Passion Pit frontman Michael Angelakos pleaded “pure bewilderment’’ from a hotel room on a tour stop in France. “Everything has happened so quickly and with such severity that it’s almost impossible to comprehend,’’ he says. “It’s humbling and wonderful to have affirmation that what you’re doing isn’t stupid and irrelevant.’’

Time to 'Speak'
Actor David Strathairn and Howard Zinn, BU professor emeritus of political science (left, with producer and co-director Chris Moore), were at the Tsai Performing Arts Center last night for a live performance of “The People Speak,’’ Zinn’s documentary about democracy that features appearances by Matt Damon, John Legend, Marisa Tomei, and a number of other celebs. Strathairn performed excerpts before he and Zinn took questions from the student audience. “This is something we want to be a part of,’’ Strathairn said.

Globe correspondent Terri Schwartz contributed. Read the Names blog at www.boston.com/namesblog. Names can be reached at names@globe.com or at 617-929-8253.