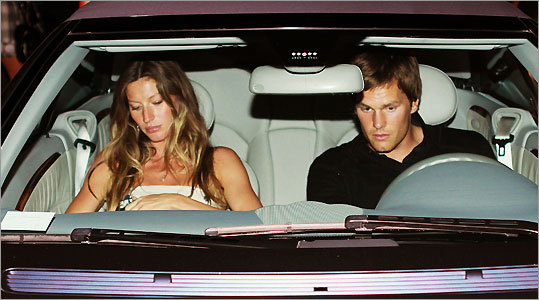 Thanks to the Patriots bye week, our quarterback and his wife were able to spend their Halloween holiday in South Beach. Tom Brady and a very pregnant Gisele Bundchen were spotted having an early dinner at the popular Prime 112 on Ocean Drive. An employee at the restaurant told us that despite the mess of paparazzi outside, patrons allowed the couple to enjoy their dinner without interruption. Miami Herald gossiper Lesley Abravanel tweeted yesterday that Tom and Gisele were staying in the penthouse of Victoria’s Secret exec Ed Razek.

Sideliners
Pats owner Bob Kraft and Boston College linebacker Mark Herzlich , who has battled cancer, watched BC conquer Central Michigan Saturday.
Prince’s road show recalls Broadway hits
Broadway royalty Harold Prince was at Northeastern University over the weekend to chat about his theater days. The man who produced and/or directed shows such as “The Pajama Game,’’ “Damn Yankees,’’ “West Side Story,’’ “Fiddler on the Roof,’’ “Cabaret,’’ “Company,’’ “Follies,’’ “Sweeney Todd,’’ and “Evita’’ (not a bad resume, right?), dished about the new look of Broadway, and told the audience about how he used to hang out at Walgreens with Stephen Sondheim. About the current state of Broadway, Prince said, “There are a lot of revivals happening, but by and large it’s pretty arid, and there’s good reason for it. The advent of rock and hip-hop is not terribly helpful to musicals.’’ On hand to sing some of the most memorable numbers from Prince’s shows were actors Judy Kaye and Tom Wopat.
Communicators merge
WGBH spokeswoman Jamie Parker and Greenough Communications president Phil Greenough celebrated their nuptials over the weekend at the Taj Boston. Notables on the guest list included director Sam Weisman and actress Constance McCashin, “Masterpiece Theater’’ producer Rebecca Eaton, Bill Emery of 28 Degrees, and cookbook sisters Sheila and Marilynn Brass.
Tune up your tuba
Attention all musicians who play funky instruments: Landon Pigg wants you. The dreamy folk singer and actor, who plays Ellen Page’s love interest in the Drew Barrymore-directed roller-derby movie “Whip It,’’ says that when he arrives at the Paradise Rock Club tonight, he’ll be looking for musicians, especially those who play oddball instruments, waiting outside the venue. The last time Pigg (inset) performed in Boston, his keyboard player noticed a woman with a trumpet strapped to her back outside the club. Pigg wound up befriending her, teaching her a song, and bringing her on stage for a number. Pigg hopes history repeats itself tonight. “We hope to find maybe someone with a trumpet - and maybe someone with an interesting instrument that I’m not thinking of right now.’’ Accordion? Oboe? Pigg admits that because of his sensitive-guy role in “Whip It,’’ and his song “Falling in Love at a Coffee Shop,’’ which has been used in some weepy television commercials, most of the people who come out to his live shows are swooning women, not that that’s a bad thing. “It’s moms and daughters who like to buy my T-shirts,’’ Pigg told us, laughing. “In the cooler cities, we get some dudes out. The dudes are so appreciated.’’ Pigg opens for A Fine Frenzy at 8.
JoJo’s school of pop
After seeing herself referred to as a Northeastern University freshman - most likely on Boston.com - Foxborough-bred pop star JoJo tweeted that she wants to make it clear that she has deferred her first year of college to work on her music career. That explains why she has been in Los Angeles so much.
Seen around
Cameron Diaz, in town to film “Knight & Day’’ with Tom Cruise, was spotted dining with director Bobby Farrelly at Scampo at the Liberty Hotel over the weekend. Diaz and Farrelly filmed “There’s Something About Mary’’ in Rhode Island 11 years ago. . . . Also spotted at the Liberty was Celtic Glen Davis, who stopped by the hotel on Halloween night. . . . Actor Alan Thicke, of “Growing Pains’’ fame, was at the Scorpion Bar at Foxwoods over the weekend. We’re told he ate Mexican food, watched the World Series, and left a few times to smoke. Yes, Mr. Seaver smokes. Thicke was at the casino to host “The Price Is Right,’’ a live version of the game show.
Man of the year
Union Oyster House owner Joe Milano, who serves as honorary chairman of the Don Orione Nursing Home capital campaign, was honored at the Hilton at Logan Airport over the weekend as the “Don Orione Man of the Year.’’ Milano was joined by friends including Cardinal Sean O’Malley, WBUR exec Paul La Camera, Italian Consul Liborio Stellino, and State Senator Richard Tisei.

June Wulff of the Globe staff contributed to this report. Read the Names blog at www.boston.com/namesblog. Names can be reached at names@globe.com or at 617-929-8253.

Photos of the couple out on the town.
Your comment is subject to the rules of our Posting Policy
This comment may appear on your public profile. Public Profile FAQ