A celebration of book and director 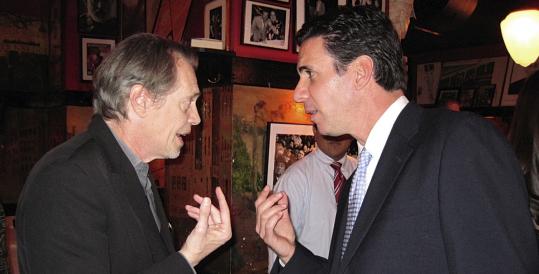 NEW YORK - Mitch Zuckoff exchanged many e-mails with Robert Altman’s widow, Kathryn, before embarking on his biography of the legendary director. But this one was different.

“The first time she wrote, ‘Love, K,’ I was like a teenage schoolgirl,’’ said Zuckoff, surrounded by Altman acolytes the other night at a star-studded party in New York to celebrate the release of “Robert Altman: The Oral Biography.’’

The author, a former Globe reporter who now teaches journalism at BU, spent more than three years on the bio, and interviewed dozens of the director’s former colleagues and co-conspirators, from Sally Kellerman and Garrison Keillor to Lily Tomlin and Garry Trudeau. Happily, their raucous reminiscing includes a few revelations. (See Altman’s brief affair with Faye Dunaway.)

“Bob had a vision that film should explore human behavior,’’ said Zuckoff. “With my reporting background, I think that’s what makes his movies so appealing to me.’’

The party at Elaine’s - yes, the storied saloon was a longtime hangout of Altman’s - attracted an eclectic crowd of friends and admirers.

“I knew him and I loved him,’’ said actor Steve Buscemi, who appeared in Altman’s 1996 film “Kansas City.’’ “The last time I worked with Bob, it was right here at Elaine’s. He used me and Martin Scorsese as background.’’ (That was 2004’s “Tanner on Tanner.’’)

Kelly Macdonald, the adorable Scottish actress who played the memorable Mary in “Gosford Park,’’ said Altman was one of a kind. “I never got a call from a director before saying, ‘Come play with us,’ ’’ she said, laughing. “There was nothing to be done except say yes.’’

Zuckoff’s book, published by Knopf, has received positive reviews from everyone except The Los Angeles Times, whose film critic Richard Schickel cared little for Altman on the screen and likes him even less on the page.

“So what?’’ sniffed Scott Griffin, who produced Altman’s “Resurrection Blues’’ when it was staged at the Old Vic in London. “No one reads in LA anyway.’’

Zuckoff said some people, like Tim Robbins, were happy to participate in the book project, and others, like Warren Beatty, were not.

“They made a genius picture together 35 years ago,’’ said Zuckoff, referring to “McCabe.’’ “But Warren just wasn’t sure he wanted to talk about Bob. In the end, he did.’’

And what does Altman’s widow think of the book? Is it all there? “Oh, not everything,’’ she said with a grin.

Damon’s people tight-lipped on ‘emergency’
Matt Damon’s publicist had nothing more to say yesterday about the family matter that prompted the actor to skip Thursday night’s OneXOne fund-raiser in San Francisco. E! News first reported that Damon skipped the charity event to be in Boston. His rep reiterated yesterday it is a “family emergency of a serious nature,’’ declining to say more. Damon and wife, Luciana, have two children together, Gia and Isabella, and Luciana’s daughter, Alexia, from a previous relationship.
Hamm, Renner catch Maher’s show
Bill Maher had a few high-profile fans at his Thursday show at the Wilbur: “Mad Men’’ star Jon Hamm and “The Hurt Locker’’ actor Jeremy Renner. Both are in Boston filming Ben Affleck’s flick “The Town.’’ After, Renner and Hamm stopped by Bond at the Langham Hotel. (Tony Hawk dropped into Bond for a burger yesterday.)

"I thought America was looking good. . . . Things are getting a little rough now." -- Bono, saying the United States seems more polarized than when U2 performed at the Obama inauguration.