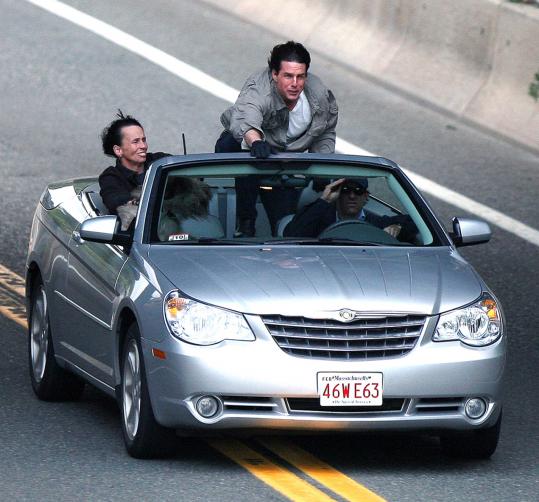 Does Tom Cruise do his own stunts in the new movie he’s making here? Judging from this shot, he does. Cruise was standing up while filming this scene in a speeding convertible. (There was a dog in the front passenger seat.) Cruise and Cameron Diaz are in Boston filming a spy thriller formerly titled “Wichita.’’

Ted’s memoir sells
While not a runaway bestseller, Ted Kennedy’s posthumous memoir, “True Compass,’’ is still doing decent business a few weeks after its release. The book, which hit stores Sept. 15, has sold 170,000 copies, according to Nielsen BookScan. And it seems the Kennedy compendium has considerable appeal outside Massachusetts: “True Compass’’ has actually sold better on the West Coast (32,000 copies) and the South Atlantic (30,600) than in New England (30,000). Kennedy’s account is on pace to outperform some other high-profile political memoirs, including Hillary Rodham Clinton’s “Living History,’’ which has sold 209,000 copies, and perhaps “The Reagan Diaries,’’ which has moved 273,000 volumes. But “True Compass’’ is about to lose its mojo with the release of Sarah Palin’s memoir, “Going Rogue: An American Life,’’ which this week shot to the top of Amazon’s bestseller list even before it’s been published. The book by the former Alaska governor is out Nov. 17.
Wyclef back in school
Yes, that’s Wyclef Jean wandering around Berklee College of Music. The former Fugee has enrolled at the school with the aim of getting a diploma. According to a Berklee flack, Jean’s taking a combination of on-campus and online classes, and his curriculum includes courses in ear training, theory, improvisation, and guitar. (His first day of class was Monday.) “I left college after only the first semester to pursue my career, and after all that I’ve accomplished, going back to college was the one thing I wanted to do for myself,’’ the Grammy winner said in a statement. Jean has a mixtape coming out next month and a solo CD titled “Wyclef Jean’’ due to be released in March.
New Kings rules
Lyons Group partners Patrick Lyons and Ed Sparks celebrated the opening of Kings Dedham with a bash at their new bowling alley/restaurant at Legacy Place. The crowd included Boston Concession bigwig Joe O’Donnell, Summer Shack chef Jasper White, WAAF jock Greg Hill, “Shutter Island’’ author Dennis Lehane, and media types WHDH reporter Sorboni Banerjee and fiance WCVB reporter Jarrod Holbrook, WFXT reporters Sharman Sacchetti and Erin Hawksworth, and Fox 25 meteorologist Kevin Lemanowicz.
Albright counsels fans to ‘Read My Pins’
Former Secretary of State Madeleine Albright was in town yesterday hyping her new book, “Read My Pins: Stories From a Diplomat’s Jewel Box.’’ The Wellesley grad gave a short talk and then signed copies of the book during an appearance at UpStairs on the Square in Cambridge. Albright also did a meet-and-greet later at the Park Plaza Hotel.
BSO’s Levine doing well after back surgery
With any luck, Boston Symphony Orchestra music director James Levine should be up and at ’em in no time. The maestro’s surgery “went well’’ and “he sounds great,’’ according to his manager, Ronald A. Wilford. The 66-year-old baton twirler is expected to be laid up until late this month after undergoing surgery for a herniated disc in his back. . . . Boston attorney Danielle deBenedictis and husband Peter Karlson, owners of Nantucket’s Summer House, are across the pond, paying a visit to Ascot in England and attending a reception in Ireland with President Mary McAleese and her husband, Dr. Martin McAleese.
As graphic as ever
Sex therapist Ruth Westheimer made moderator Ted Reinstein squirm with her frankness during her talk this week at the New Center for Arts and Culture.
Odd caucus-fellows
Former Republican gubernatorial candidate Kerry Healey and left-leaning MSNBC’s Chris Matthews made an odd pair at the Mass. Women’s Political Caucus’s annual tribute to Abigail Adams.
Junior’s on the job
Former Pats linebacker Junior Seau was on hand for the Bruins’ unhappy opener. Seau, who’s said he may return to the Pats this season, was at the Garden to shoot a segment for his new Versus show “Sports Jobs With Junior Seau.’’ After the B’s defeat, Junior joined the bull gang in prepping the floor for the Pink show. . . . In the house for the hockey game were Reebok’s Paul Foster, Da Vinci owner Wioletta Zywina, chef Dante de Magistris, Max and Dylans owner Brad Dalbeck, PR poobah George Regan, and Tim Sr. and Kathy Thomas, parents of the B’s Vezina Trophy-winning goalie Tim Thomas.